Just For Informational Purposes, Of Course...


You might want to have this pdf of the above manual on a thumb drive somewhere. Just...because. 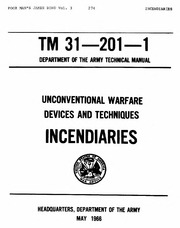 And maybe also this one too.

Nota bene that neither of these is the unreliable and jackassical Anarchist's Cookbook, which tome, owing to certain well-publicized errata, is guaranteed to get its users killed, with far more finality than a Wile E. Coyote demonstration would suggest.

The .mil's manuals, by contrast, have a reliability and trustworthiness factor of 5x5.

For bonus utility, perhaps also in dead-tree form, which requires no electrical power to utilize.

For instance, so that if you see something, you can say something, to the appropriate three-letter agencies' minions. Because you'd totally do that, as a stand-up red-blooded patriot.

Knowledge is Power. Truth is Light. Explosives are both.
Posted by Aesop at 8:00 AM

I spent many years breaking and moving things with explosives. An interesting, if mostly hard work field that has become much more regimented since the UWM and Oklahoma bombings.
Most all of us love things that go bang. Kind of a guy thing, BUT like motorcycles, you fuck around with them enough it will come to tears.
Very little good will come from downloading this material. Might even be a .gov honey trap. As to making, testing and or even storing any of the components - don't. (as in if you want to stay out of jail - don't).

FTR, a "honey trap" requires the services of a willing member of the opposite sex.

If you're implying that downloading the pdfs referenced, available for decades from 57 internet sites, might also get somebody laid, you may have found a better marketing angle than Amazon.

I've had the referenced materials, both in electronic and dead-tree form, on hand for some nearly 40 years. Blowing $#!^ up will get anyone in trouble.
Knowing how to do it is an entirely different matter.

This isn't CNWDI.
It's C-4 and such, with open-source information dating back to WWI and II, and which has been assembled and disseminated to hundreds of thousands of troops down to the lowest enlisted grades by the government, with your tax dollars and mine, expressly so that they'd have it, and access to it, should such become rather needful.

If your argument is that "no one needs explosives" substitute the word "handguns" for "explosives", and show your work.

My honey trap comment was a reference to a willing subject getting fucked as in if I wanted to concentrate my efforts on finding subjects of interest I'd monitor each and every website that offers this kind of info. Something that the government does very well.
As to "no one needs" That's not it. It's
1) Don't make it easy for them. Any ATF agent can make a case against most anybody. Combine your download records, maybe some electric matches from the kids toy rockets, a couple of lengths of galv. pipe, the contents of the average kitchen sink cupboard or your reloading bench/muzzle loading powder/Tannerite and that's bomb making materials with intent.
2) "Improvised" means there will be fuck ups and visits to you in your professional capacity.
3) It takes more knowledge and materials than I'm guessing you have to be effective in killing some bunch of people deserving of it. Maybe college kids or a mosque/church but that's about it.
Hard to get right with that.
4) Even with my expertise, I can't see what practical use any of this is. Seems more like mall ninja porn.

I'd never stick a claymore mine under someone's dashboard because we disagreed about ice cream flavors. But I think they should be for sale at the hardware store, and unless someone was planning on dropping by at 3AM in a ski mask, or without a warrant, it'd never be any problem to anyone.
In fact, the point of the manuals is that they are for sale at the hardware store, whether you knew it or not.

If not for the 200M or so people killed by their own governments on the planet in the last century or so, I'd be more inclined to the sugar plum fairy view of human nature, but reality has poisoned me for fairytales. And the last 500 years of human history has demonstrated that you can solve a lot of problems with a suitable application of high explosives, without resorting to blowing up pizza parlors and school busses.

OTOH, the government right here has killed mothers holding babies, and burned up children, without any accountability. So their "Trust us" argument rings a little hollow, and sounds like what I was talking about yesterday in "Projection".

There are many quotes about cynicism. George Carlin has a good one. My favorite is:
One can measure success in life by how well one avoids it.

Then by his own standard, Carlin was the most hypocritical failure in human history, since cynicism was the entire basis of everything he ever said.
He was also full of shit when he said that.
Because it's right up there with the joke about the guy who said "Sincerity is important. So if you can fake sincerity, you can sell anything."

Just for informational purposes, of course...Army FM 3-11 Flame Field Expedients is a worthwhile addition to this same library shelf. I highly value my dead tree copy from 1990. As with these others, it is probably available for download on 30-some odd sites.
Old Chemo

Is there a good source for dead tree versions of military manuals? I've picked up a few at Half Price Books and other used bookstores.

Aesop,
The pdf link posted is only of Appendix A, which is great info as it stands. The remainder of the FM covers building & emplacing the FFEs.
Old Chemo

Understood.
The pointless re-numbering of FMs a few years back plays hell with searches.
FM 3-11 comes back to NBC manuals in most cases.