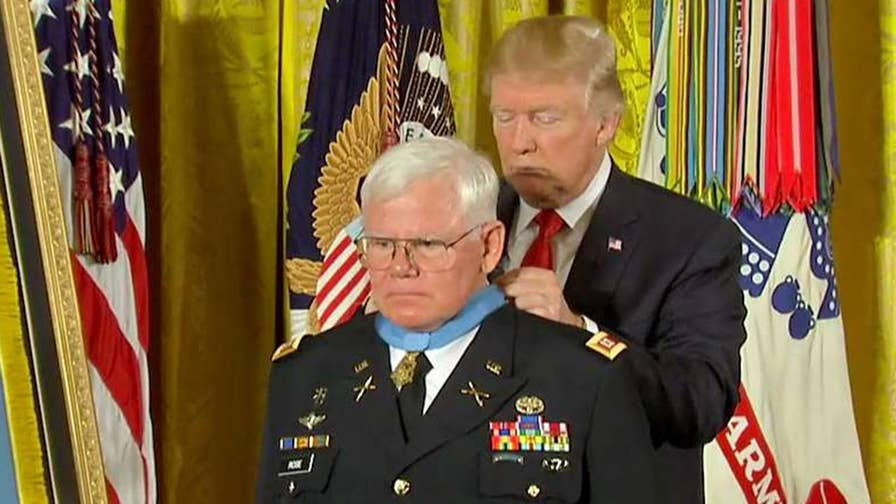 A 70-year-old retired US Army captain, then a sergeant, was awarded the Medal of Honor by President Trump for service in 1970 as a Special Forces medic in Laos, during Operation Tailwind.

Medic Rose's ribbon rack already holds ribbons for the Distinguished Service Cross from which this current award was upgraded, and Bronze Star and Purple Heart awards, but after Congress approved waiving the usual five-year time limit, the pathway was cleared to finally honoring Rose for an incident in a war no one likes to remember, in a place the US government still denies we fought:

Between 11 and 14 September 1970, Sergeant Rose’s company was continuously engaged by a well-armed and numerically superior hostile force deep in enemy-controlled territory. Enemy B-40 rockets and mortar rounds rained down while the adversary sprayed the area with small arms and machine gun fire, wounding many and forcing everyone to seek cover.

Sergeant Rose, braving the hail of bullets, sprinted fifty meters to a wounded soldier’s side. He then used his own body to protect the casualty from further injury while treating his wounds. After stabilizing the casualty, Sergeant Rose carried him through the bullet-ridden combat zone to protective cover.

As the enemy accelerated the attack, Sergeant Rose continuously exposed himself to intense fire as he fearlessly moved from casualty to casualty, administering life-saving aid.

A B-40 rocket impacted just meters from Sergeant Rose, knocking him from his feet and injuring his head, hand, and foot. Ignoring his wounds, Sergeant Rose struggled to his feet and continued to render aid to the other injured soldiers.

During an attempted medevac, Sergeant Rose again exposed himself to enemy fire as he attempted to hoist wounded personnel up to the hovering helicopter, which was unable to land due to unsuitable terrain.

The medevac mission was aborted due to intense enemy fire and the helicopter crashed a few miles away due to the enemy fire sustained during the attempted extraction.
Over the next two days, Sergeant Rose continued to expose himself to enemy fire in order to treat the wounded, estimated to be half of the company’s personnel. On September 14, during the company’s eventual helicopter extraction, the enemy launched a full-scale offensive.

Sergeant Rose, after loading wounded personnel on the first set of extraction helicopters, returned to the outer perimeter under enemy fire, carrying friendly casualties and moving wounded personnel to more secure positions until they could be evacuated. He then returned to the perimeter to help repel the enemy until the final extraction helicopter arrived. As the final helicopter was loaded, the enemy began to overrun the company’s position, and the helicopter’s Marine door gunner was shot in the neck.

Despite his numerous wounds from the past three days, Sergeant Rose continued to pull and carry unconscious and wounded personnel out of the burning wreckage and continued to administer aid to the wounded until another extraction helicopter arrived.

Sergeant Rose’s extraordinary heroism and selflessness above and beyond the call of duty were critical to saving numerous lives over that four-day time period. His actions are in keeping with the highest traditions of military service and reflect great credit upon himself, the 1st Special Forces, and the United States Army. 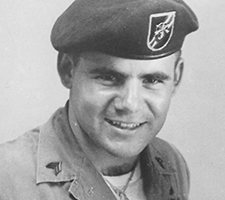 With this award, Rose joins the ranks of the fewer than 80 living Medal of Honor recipients, and truly just about the most extraordinary and exclusive fraternity in the US military.

Where do we get such men? In this case, from Monroe High School in the San Fernando Valley, Class of '65. (For those keeping score at home, from among the few NY transplants hereabouts in CA we wish we had more of.) Who joined the Army in '67 so he wouldn't get drafted into the Marines, and three years later was in a four-day running firefight in a "neutral" country. From yet another guy who puts the "special" in "Special Forces".

Thank you Bac-si. So great that he is able to have family & some surviving team members around him. Watched on C-SPAN - a nicely done & appreciative ceremony with some nice remarks from the POTUS regarding his visit prior with CPT Rose's family.
Salute!

NB: For those unfamiliar who may be researcning Operation TAILWIND for the first time, ANYthing you find from the scumbags at CNN or Time regarding this (other than their later retraction for spraying Agent Bullshit all over the place) is bogus.

Yes, but the side effect of all that crapola was it opened the op to scrutiny, which garnered Rose's upgrade to the MOH he deserved, vs. the DSC the Army hushed to whole thing up to.

If anyone's feeling frisky, send a nice note to those lying liberal idiots thanking them for left-handedly pushing another American hero to the podium of honor, albeit by their lies and deceptions. Nothing like building those folks a nice hat made out of hot coals.

Lots of unsung heroes amongst those who give medical aid in war I would guess. I have an uncle who was an ambulance driver in Korea. He received medals I know, but would never speak of his experience even to his immediate family. I can't begin to imagine all the physical human carnage he must have witnessed.

It's great to be able to watch the Medal get hung around someone's neck BY someone who loves this country. Much as the guys who were awarded the Medal in the last several years were more than worthy; the presenter was not.
Boat Guy