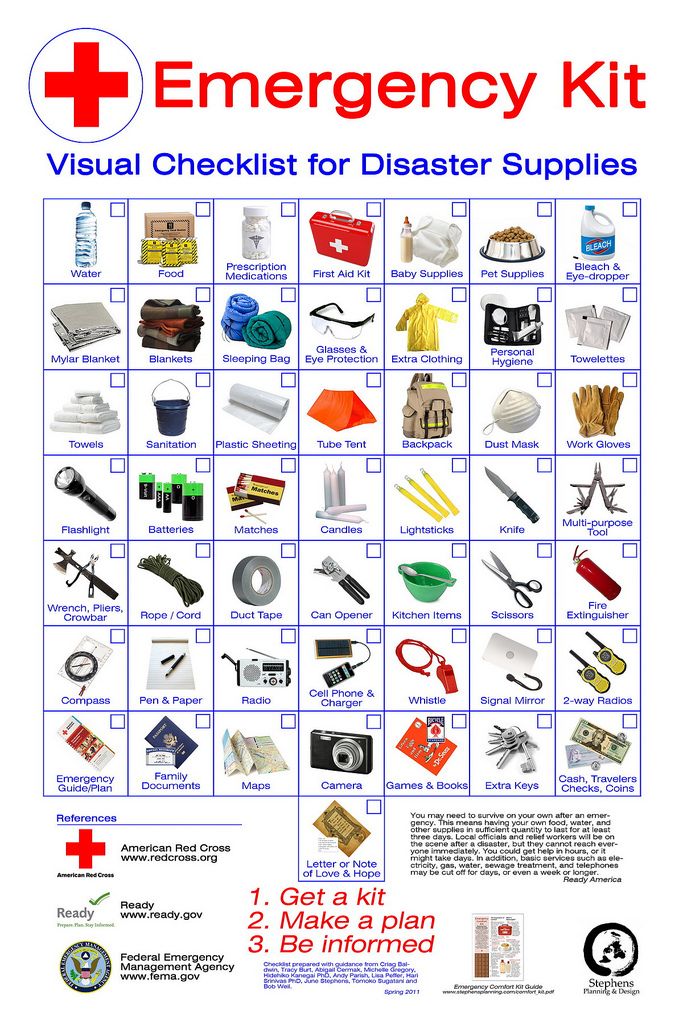 Are you missing anything?
Posted by Aesop at 8:30 AM

Not on the FEMA list, but if you make your own wall poster...

They forgot fuel for cooking. One pound disposable propane tanks are an essential. Shame on the Red Cross.

The one thing almost no one, no where in the country, lacks after a disaster is finding something to burn for fuel.
While 1# propane cylinders are very useful as such, and the exact reason I keep a few put up, other than small areas of the southwest desert, lands north of the Arctic Circle in Alaska, and someplace flooded or blanketed by a blizzard, you'd have to work real hard not to be able to find something you could cook over in about 5 minutes, in the entire country.

I have happily and easily started cooking fires from found material in the wild places from Atlantic to Pacific coasts, including in the Mojave Desert in winter, and above the tree line in the Sierra Nevada. In all of those locales, I was apt to run out of food before I ran out of fuel.

The real trick is managing to cook the food without setting one's camp or town on fire, in most cases.

In my opinion, a good SHTF first aid kit is not complete without some serious pain meds, such as 10 mg Oxycodone tablets. I usex to do a fair amount of serious backcountry technical mountaineering. I never used to have a problem getting a no-refill script for the first aid kit after explaining to a doctor what it was for. It is a lot easier to evacuate a climber with a traumatic injury and/or fracture if he isn't writhing and thrashing around in pain.

But to try and get such a pain script today? Forget it!
One of the headlines on Drudge right now today is about how doctors and government have caused the 'opiod overdose epidemic' by making pain pills too easy to get. They are willfully pretending that all the overdoses that paramedics and ER's are dealing with are due to pain pills, when they KNOW that almost all of it is due to heroin addicts injecting fentanyl-laced heroin.

Our country is literally awash in illicit heroin, and it is CHEAP. It has largely replaced crack and to some extent meth because it is so cheap and so easily and abundantly available. And because the government is ibtentionally conflating this with pain pill use and abuse, it has made it very difficult for people with a legitimate need to get them, often with ongoing monthly visits to a 'pain specialist' required, with a substantial out of pocket cost for each visit.

The reason for my rant about the pain pills is that this is just the latest thing the government decided was a problem that really wasn't. Before this it was light bulbs. Not too long ago I could buy light bulbs for 25 cents each. Now they cost TEN TIMES that much. And they fucked up gas cans beyond all recognition. And before that it was toilets. And it just goes on and on.

Okay, rant over. Thanks for letting me vent.

Wait, FEMA allowed a KNIFE to be on the list? Someone must have made a mistake.

Insights into how you or others organize your stuff would be helpful. I'm constantly reconfiguring first aid kits, bobs and the like because I can never seem to have things as handy as I want them. Any genius ideas?

This is not Obozo's FEMA.

Whatever works for you.

I highly recommend that at least once a year, if not several times annually, take a weekend and try living out of your BOB. Make notes (even just mental ones) about the shortcomings, that when you replace what you use, fix those problems.

My go-to mentor on this is Travis Haley:
"This is what *I* do. Here's why I do it. Try it out, and if it works for you too, great. But if you have different needs from me, do what works for you, based on your needs. But whatever you do, try it out, and make sure it works."

You make little improvements, and over time, you make great improvements.
But six months, a year, five years from now, you aren't the same person any more, so you won't have the same needs and priorities.

Now, having given the zen answer via Curly from City Slickers,
whatcha tryin' to organize?