No pics of these c*********s (if you watched Deadwood, I'm channeling Al Swearengen here) in question who think a sports stadium is their pulpit to berate America and piss on their fans.

All those overpaid, under-educated, miserable crying sh*tbags are dead to me.

I won't be watching, listening, or paying any attention to any sport, any team, any league, or any network that showcases these nitwits and lets them keep a job tomorrow. (If they'll start lighting themselves on fire though, I'll happily send an approving note.)

And if this keeps up, and the teams and leagues don't start terminating these jackholes, and banning them for life from their respective sports, my next target is every advertiser that subsidizes their antics.

So car companies, beer distillers, and everyone else, this is your only warning:
put the word out that this horseshit ends today, or earn the wrath and enmity of one helluva lot of pissed off former fans. See who wins my game.

Addendum:
And from Moonbattery via A Nod To The Gods: 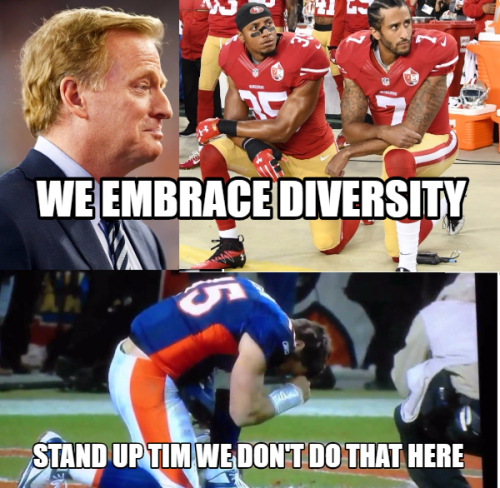 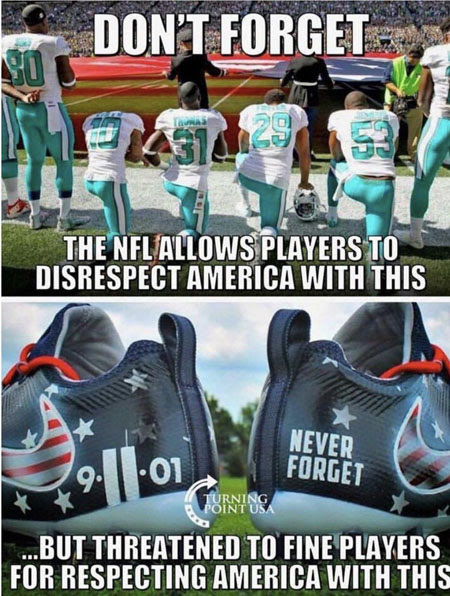 Matt Bracken has one up at WRSA today too. Seems like today, we've all had exactly enough bullshit out of the National Felony League, et al. 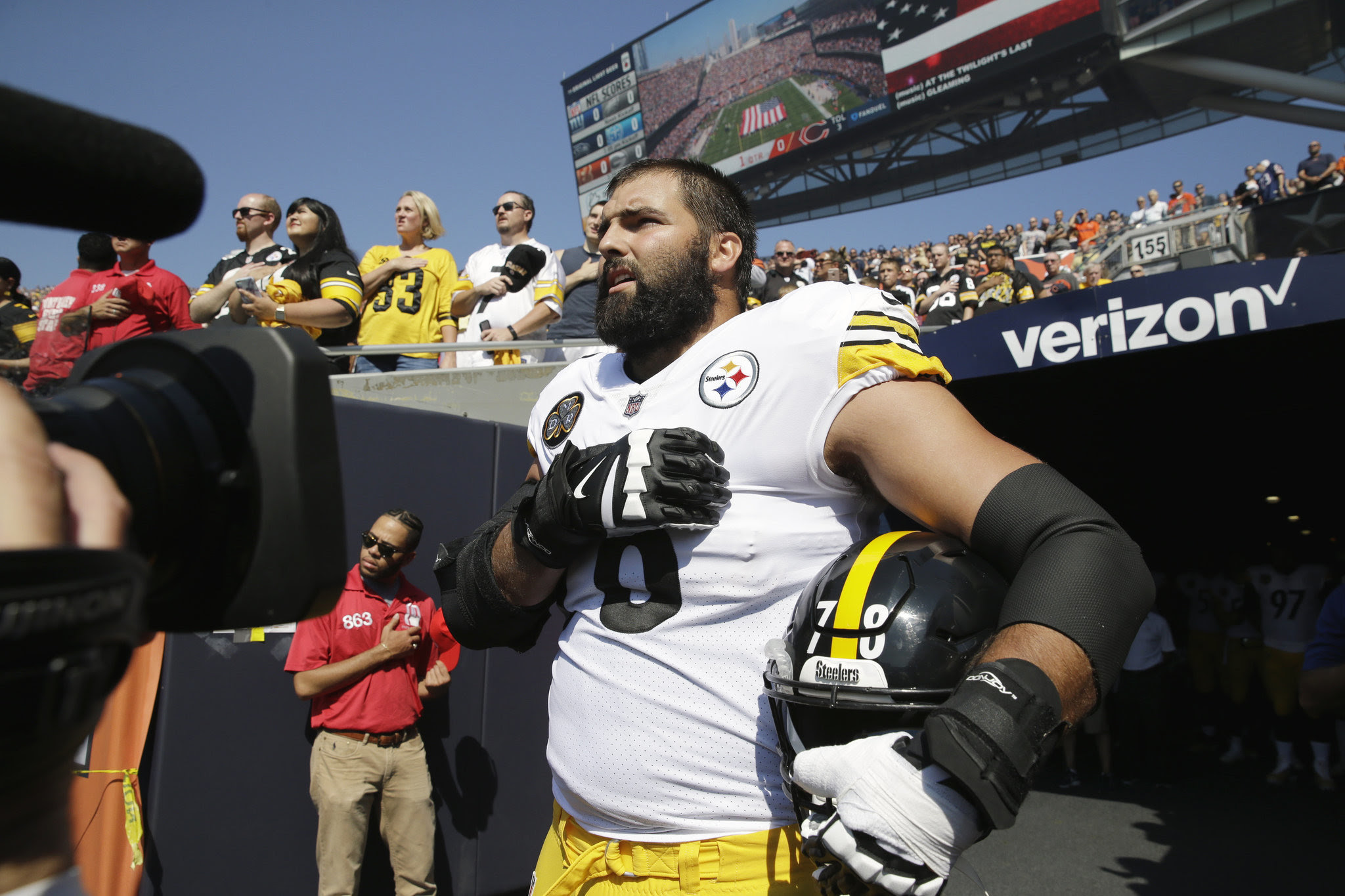 Alejandro Villanueva, a West Point graduate and former Army Ranger who served three tours in Afghanistan, stood at the tunnel with his hand over his heart to salute the flag and honor the brave men and women who have served America. This is not a political stance but a “love of Country” stance. These players need to understand the difference and honor those who have fought and died for America.

One real man amongst an entire team of the Pittsburgh Kneelers.
Outrageous.
(And to the pussified New England "Patriots" : Stop appropriating my culture!)

"Effective immediately, all DoD advertising is suspended for NFL games, and any sports broadcast associated with them, including all cable networks. No Department of Defense support will be given for color guards, honor guards, flyovers, or any other such appearances or support in conjunction with any team, sport, or league that is disrespectful to this nation, our flag, or the men and women of the armed forces. All professional sports games are henceforth off limits to any service members in uniform, or while wearing any portion of their uniform, until further notice. Violations of this regulation will be punished by courts martial in each and every incident without fail by subordinate commanders. There will be no unit activites permitted at such events, no unit parties revolving around it, and Super Bowl Sunday activities around the world will henceforth be conducted as a full duty day, in all likelihood one spent in the field, getting cold, wet, and dirty doing the mission of the military. It will not be spent celebrating a bunch of pampered pussies free to be the disrespectful idiots they so clearly are. As a land of freedom, America has room for their ilk, but this Department of Defense will no longer subsidize their disgraceful and shameful conduct and childish disrespect for the nation in which they live, in any way, nor to the slightest degree."

See if he doesn't, and/or the calls don't start coming from members of Congress for him to do exactly that, in 3, 2, ...

Blood is in the water, and sharks are gonna shark.

The National Felony League has mishandled and misjudged this horribly, and they're about to find out what happens after you grab the tiger by the tail, and he decides you look like lunch.

Couldn't happen to a more deserving bunch of douchebags.

Boycotting advertisers would necessitate watching...tell ya what, make a list for me 'cause I ain't doing that. The NBA lost me 20 years ago and it's been 2 years now for football. Chances are though, being a consumer of mostly products related to making glass and not much else, there won't be much of a chance for me to participate.

The ripple effect will start to affect ticket sales. Now a lot of sold seats(like season tickets) will go unfilled and as that increases, vendors are going to start raising holy hell. The advertisers can't help but notice this.

I don't know how to do this but I'll bet tracking sales of NFL licensed fan apparel could give an indication of where this train is heading.

There wont be mp seats,,,,I'm sure the cheedrin can get bussed in from the rallies.

Is there anything Blacks can't fuck up?

Stopped watching baseball back in the early 90's after the whiny strikes.
Basketball is and always has been a black man's sport. I have a hard time getting interested in it. Boring. If I did have an interest, it would have waned with all the whiny shit going on and I would have stopped watching it as well.
Stopped watching football last year when this all started. Got rid of TV altogether as the sports seemed the only stuff worth watching. Saved a fortune.
I wish more people were like me and actually stopped supporting their own demise. Our culture is under attack, and unless we say "No, fuck you", it's only going to get worse.

Haven't watched the NFL in two years, despite the fact that the team I've been following my entire life hasn't had a single player or staff member take a knee at all (QB and head coach visit troops in war zones every year, go to the range with them, etc.).

2. Same teams get all the attention and the preferential treatment. Cowboys, Patriots, any team from NY or Kalifornia, and for some stupid reason, the Atlanta Falcons.

5. The NFL and the media has tried relentlessly to ram the "prototype QB" down our throats. By "prototype QB" they mean "black QB who runs a lot". Problem is, the vast majority of them can't win the rings like the guys who stand in the pocket, make play calls, intelligently read defenses, and use a combination of power, accuracy and touch to get the ball where it needs to be at the right moment. Guys like Drew Brees and Tom Brady. And you know what else? Those kind of QBs are all white. That's the problem the NFL has with them.

6. Last, but not least, you have head assholes who are kneeling during the anthem. Fine, do whatever y'all want. But I'm going to do whatever I want, and what I DON'T want is to be lectured by you kneeling fools. Fuck you.

I don't follow professional sports at all so it would be hard to quit.
If the they start setting themselves on fire in protest I will start watching.
_revjen45

It took awhile but watching Australian Rules Football finally turned me against the NFL. So much better game to watch. Normal fit guys without equipment playing a fast moving game. Lots of scoring and not a lot of penalties and no holdups in play. A few seconds of commercials after every score.
Now watching a college or NFL game I'm fucking amazed at how lame it all is and nobody sees it. All the hype, commercials, artificial bullshit, slow play. I really can't stand to watch it.
Now these over paid 70 IQ dirt bags taking a knee........fuck me they should have been left in Africa slicing and dicing each other with machetes.

Remember when sports and Hollywood were an escape from political machinations?

Hockey. I love hockey. Fast, insane talent, quite a bit of bodily injury as happens, but the players LOVE the game. They were usually brought up in it from pond hockey as a kid on up - ice runs through their veins. It's a beautiful sport, it's a brutal sport, it's the only sport I can stand watching. It's also a TON less pussified than football.

Also knowing that there is nothing more ridiculous than trying to take a knee and you'll end up slowly spinning around on the ice - no NHL player is going to be that stupid. All of them stand on the ice and benches for TWO anthems, not one. A lot of them aren't even from the U.S. or Canada but know something about respect. It's the last sport standing, and the only one I've watched in over 20 years.

If they ruin it though, no big deal. Back to the tons of other hobbies we have.

That's the message ALL people being paid to play a sport should know: WE can do other things. YOU can't.

I remember those times. They'll come around again - maybe not in our lifetimes but they will. As I just said we all can do other things with our lives. We can read, write, create art, garden, shoot, hunt, cook, sew, knit, whatever we all feel like doing.

Actors and sports players though - their income is tied up in acting for us, or playing for us. They ARE our court jesters. When we all become displeased with our jesters, we toss them out or ignore them. They lose money because they don't have any other skills or income streams. We do. I repeat: WE DO.

It's time to have our jesters stop preaching at us, and it looks like that's starting to happen. Hollywood losing money. NFL ratings tanking. They either get apolitical again REALLY FAST, or we WILL replace our jesters. They are NOT necessary. We are to them, though. It's time they were reminded of that.