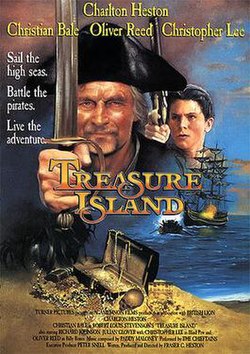 Ted Turner has certainly pulled some bonehead cinematic moves in his day. (Colorizing Casablanca, for instance.) But he's more than made up for that sort of general jackassery with the creation of no small number of excellent productions. Treasure Island is one of the best of those, made for US cable, and released in theatres abroad. There have been several film versions of Robert Louis Stevenson's classic pirate adventure yarn. (Nineteen, in fact, and nine teleplays, covering either the exact story, or derivatives of it. Including by the Muppets.) Skip all the others. This one is bar none the best yardstick by which to judge every other attempt, and leaves the other versions in the dust. Opening with Oliver Reed coming ashore as Billy Bones, and moving to Christopher Lee as Blind Pew, it only gets better as it goes. Christian Bale, then but 16, stars as Jim Hawkins, and the story and dialogue hew faithfully to Stevenson's work. And midway through the piece, Charlton Heston, aged 67 years when this was filmed and with a full and legendary career behind him, swaggers onscreen as the best, truest, and most swashbuckling Long John Silver ever to play the role, and carries the tale and the role magnificently from then until the closing scenes of the film. Shot mostly on location in Cornwall England, and on board the recreated Bounty II, originally made by MGM for Marlon Brando's 1962 version of that tale, the film is well-directed by Heston's son Fraser, with a wonderful Celtic-influenced seagoing score by Paddy Moloney, and played by the Chieftains. It thus satisfies historical purists, delights the ear, and engages the mind with this telling of a longtime favorite tale.
One of Turner's other boneheaded moves (or even Warner Bros.', take your pic) is that a lot of the Turner Productions catalog hasn't been made available for years. This one was only released in September of 2011. I jumped on it, lest it disappear again. So if you fancy this tale, and like it well-told, by all means get a copy of this flick before it's gone for another 20 years. If you don't, somebody's liable to hand you a Black Spot, and we're not sure what happens to you after that.


UPDATE: Somehow I missed putting this one up on September the 19th the first time I posted it. Sink me. Error rectified. And it's still the best version ever filmed. 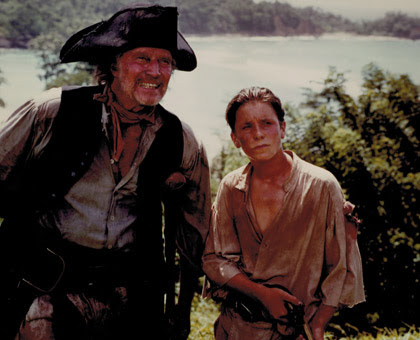 And when the sun sinks below the yardarm tonight, there'll be no points guessin' what's goin' into the panopticon herabouts, in 70-inch UHD glory.﻿
Posted by Aesop at 1:00 PM

Labels: Movie Of The Day

Best version of "Treasure Island" ever, bar none!

A side note, sent the Senior Minion a text, to remind her that today is International Talk Like a Pirate Day. Got a text back from her in short order that said "I LOVE YOU!" Complete with laughing emoticons!

Off topic, but what do you think of this for cleaning wounds?

Comes up when I search for Bactine on amazon.

Read the ingredients: water, a tiny dab of mild acid, a drop of household bleach, and a pinch of table salt.
It's saline/tap water, selling at $227/gallon. (Do the math, at 128 fl. oz per US gallon).
If I was selling it, I'd love the stuff.

Get the Bactine.
Puracyn is snake oil, marketed like it was gold.