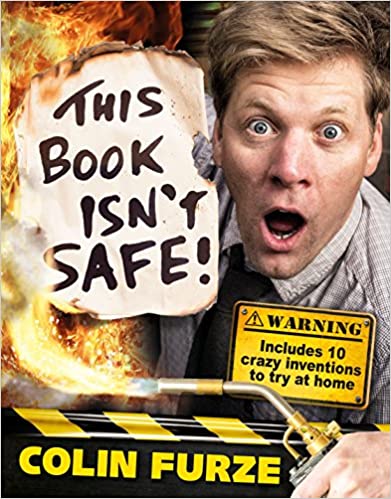 At a New Year's Eve party in 1978, at some very posh group amorous encounter, all the timelords of Doctor Who, all of the Pythons of the Monty variety, Hugh Laurie in his Blackadder incarnation, Robin Williams, Dr. Strangelove, and Wile E. Coyote all conjugated with the same woman. Who subsequently birthed Colin Furze. (Okay, it may or may not have happened like that, but that's where I'd put my chips.) Back in the late 1800s, the US Patent Office wanted to close, because "everything has been invented". About 2012, then-plumber Colin Furze said "O HELL No it hasn't!"

If you've seen his YouTube channel (as 4.5M subscribers have, with 450M views), you know what I'm talking about. If you haven't, I'll just share a few representative examples of his work (all insanely functional):

The Scooter Flamethrower:
The 70MPH Mobility Scooter:
The Pulsejet Bicycle:

This man should be psychologically evaluated for mental soundness.
He should also have a weekly syndicated cable show, with a ginormous budget.
(Sponsored by Johnson & Johnson, Bell Helmets, Dupont Nomex, and the American College of Emergency Physicians). With the proviso that an entire fire station (both engine company and paramedic ambulance) be on standby 24/7/365. I'm pretty sure anyone within the radius of the fireball in his neighborhood has to buy fire insurance on a special assigned risk rider, somewhere in the otherwise quiet countryside of Lincolnshire, England.

Once you've spent an hour or two in the black hole of his psychotically funny video escapades, lock up the kids, and hide the wifi router: he has released a book. As a direct result, all around the worldwide anglosphere, emergency rooms and burn wards everywhere are expanding their capacity.

I shudder to think what happens when whatever disease he has spreads at the speed of Amazon, for about thirteen bucks (lucky number). But the money goes to a couple of good causes: more Colin Furze video projects, and the Colin Furze Prophylactic Burn Recovery Fund.
I'm pretty sure both the local fire squad and the nearest emergency hospital know him on sight, from frequent acquaintance. This book's sales will certainly help him pay those bills.

But that's his problem. Yours is simply the tears of laughter at his antics, trying to look away but not being able to, and keeping your kids, or god help you, yourself, from trying a tinkerer's hand at running with chainsaws and playing with fire. Literally.

If I were head of US Immigration, I would get this guy an H1 visa, and a ranch in Texas, so he could add high explosives and crazy amounts of firearms to his repertoire.
But I'd put him somewhere out in BFWest Texas, where no one lived within the CEP of whatever he'd concocted, and there was nothing to kill or set on fire but jackrabbits and some tumbleweeds.

Steve Irwin, may he rest in peace, only wrestled crocodiles and played with deadly vipers. Colin Furze makes him look like a pussy. He also makes him look reserved and sane by comparison.

By all means, watch the videos, and then support his madness by purchasing the unsafe book. But for heaven's sake, when you're done with it, lock it in the safe, lest your children find it and start reading it. Bozo The Clown meets The Anarchist Cookbook is probably child endangerment in any court of law.

Colin Furze gives a whole new meaning to "I've gotta GO!"
Posted by Aesop at 6:00 AM

Labels: comedy, Ex Libris, tried to look away but can't unglue my eyes

Damn it's good to see an Englishman(not in the SAS) with balls.
We had a small pulse jet in aerospace engineering at CU. More similar to the German buzz bombs than the one in the video though. Didn't kill anyone mostly because older wiser heads prevailed and shut the project down. Absolutely the loudest sound I've ever heard.

HEY HEY, I live in BF w Texas. At least there'd be something to do if he relocated cause right now, watching the fucking cotton growing ain't much of a jump start.

Not bagging on it.

But there's a reason you put nuclear weapons plants and space launch sites out away from residential neighborhoods.