File Under: Opioid Deaths - I Told You So 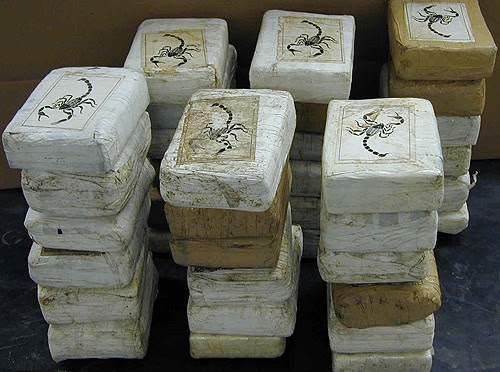 So, exactly as I recently explained awhile back, the "opioid overdose epidemic" is overwhelmingly street addicts checking out permanently from seeking higher highs due to acetyl fentanyl-laced heroin, not codgers eating their bottles of Norco and Percocet.

Evidence to the point:

Authorities confiscated nearly 195 pounds of fentanyl in a pair of busts that prosecutors said included one sting that netted 32 million lethal doses of the drug, an opioid 50 times stronger than heroin.
Four people were arrested after the busts in August and September that also netted 75 pounds of heroin and cocaine. Bridget G. Brennan, New York City's special narcotics prosecutor, said the busts come as overdose deaths hit an all-time high in New York's five boroughs in 2016.

"The sheer volume of fentanyl pouring into the city is shocking," she said. "It's not only killing a record number of people in New York City, but the city is used as a hub of regional distribution for a lethal substance that is taking thousands of lives throughout the Northeast."
In the first bust, on Aug. 1, 2017, police and federal agents seized more than 140 pounds of fentanyl — the most in the city's history — after watching Rogelio Alvardo-Robles and Blanca Flores-Solis receive what appeared to to be a package of cocaine from an unknown trafficker at a Walmart in Manhawkin, New Jersey. Authorities said that after the exchange, they went back to an apartment building in Queens' Kew Gardens neighborhood, where a DEA agent approached them and seized the alleged drugs.
Afterward, authorities said they got a search warrant for their apartment and found 97 packages of drugs in suitcases and a purse in a bedroom; 84 of the packages were either filled with pure fentanyl or heroin laced with the powerful drug. Authorities said the trove could have had enough doses to kill 32 million people from overdoses.
Then, on Sept. 5, authorities seized another 53 pounds of fentanyl-laced heroin and another 2 pounds of uncut fentanyl during a stop near Yankee Stadium in the Bronx. That bust came after detectives and DEA agents watched Edwin Guzman and Manuel Rivera-Santana pick up a duffel bag from men inside a tractor trailer and drove back into New York City.
After the stop police got a search warrant to open the locked duffel, and found 25 1-kilogram bricks with the drugs.
The four people arrested in the two busts each face criminal drug possession charges; Guzman and Rivera-Santana also face conspiracy counts.


For those of you striving against the residue of public-school mathematics, let's break that down: if 85 pounds of acetyl fentanyl would kill 32M people, that means the lethal dose is  (38,636 mgs divided by 32M LD50 doses =) 0.0012 mgs, i.e. 12 micrograms.
For reference, a grain of common table salt weighs between 300 and 600 micrograms.

Remember this the next time some potheaded large "L" Libertardian starts yapping about the people in the federal pen for "non-violent" drug offenses.
(Ask them to explain how legalizing bringing this sh*t into the country will result in less harm to society, after they've imported in a couple of duffel bags enough of their home-cooked crap to wipe out the entire population of NYFS and Pennsylvania. Because reasons.)

And to bring this the extra mile, I suspect someone at the DEA is smoking some seized product, because that would make the fentanyl somewhere around 1433 times more lethal than Sarin nerve gas. (>cough< Bullshit! >cough<) Common Core math at federal agencies for the win.

Nonetheless, offering the arrestees LWOP instead of execution for that level of dealing/distribution, in return for rolling over the entire supply chain, is the way to play this. Highest guy holding the bag gets the death penalty, everybody else gets shipped to some Chateau D'If-style hole, with a plate of food shoved through a slot morning and night, until they keel over. It sounds like the arrestees are just some more Dream Act folks, selling Americans the illegal poisons Americans won't sell.

Junkie ODs are Darwinism in action. And executions for drug peddling should be as common as parking tickets. So if we're going to have a War On Some Drugs, let's really make it a war. Starting with killing the enemy. What we have now is a Controlled Pressure On Distribution Pipelines To Maximize Cartel And Crooked Cop/Judge/Congressman Profits.

Also nota bene, none of the Libertardian Usual Suspects seriously argues for abandoning the War On Murder, the War On Armed Robbery, or the War On Rapists, despite the fact that these illegal activities have been going on since at least back to the time of Cain and Abel, predating the War On Some Drugs by something like 5900 years.
Why izzat, d'y'spose?
Posted by Aesop at 9:08 AM

Can fentanyl be spread over food somehow? I have no idea how it works.

Can it be inhaled ( dust ) or eaten and still have effect?

just this morning, it was announced in the MSM that 41 states are opening investigations of 'big pharma' for the 'opioid epidemic'.

if history informs, it will not be long before all amerikans will be forced to live in pain, their physicians being fearful of prescribing agents that will alleviate their suffering and increase their quality of life for fear of some bureaucrat, somewhere, being offended that an amerikan can be free of pain and ALLOWED A SOMEWHAT NORMAL LIFE and the physician, doing his job, taken down in some manner, up to and removing his license.

time will tell the outcome of the 'investigations'. my belief is that there will be two outcomes: 1)more regulations, and 2)more pain for amerikans whose bodies have broken down due to hard work and age.

I had some questions on the math when I heard this on the radio, 32 million lethal doses is a LOT of people, you'd expect a couple truckloads at least. Or put another way, how much "safer" heroin would you need to mix this with in order to avoid killing all your potential repeat customers? Seriously, what's the sense of getting them hooked if the first hit kills them.

Almost 30 years ago I sprained my back (with a really hard sneeze, of all things), and my doc prescribed Tylenol-3 (with codeine). I must have an especially low tolerance, since one pill got me absolutely stoned (my ex-GF said I was lying on my bed singing). I only took a couple pills, the effect scared me a little and I can see how people get hooked, but for the couple nights when the pain was bad it allowed me to sleep and heal. I can only imagine what will happen to people in chronic pain who will have even more trouble getting the painkillers they need to function.

I looked up fentanyl and the lowest dose product was 100mcg. But any fentanyl was for use only on people already opiate tolerant with minimum doses a day listed. I'd say the cops math is off for addicts but who knows with somebody not already on opiates. Not the stuff to mess around with.

Acetyl fentanyl, i.e. designer-drug home-cooked fentanyl, is not pharmaceutical-grade medicinal fentanyl that gets prescribed, in any sense.
Starting with the fact that all data on it is solely empirical, from the streets, where indeed one hit frequently kills you deader than canned tuna, frequently with the needle still sticking in your arm.

I honestly don't know if it can be ingested with the same effect, but it's possible.

The hearings into big pharma will provide grandstanding face time, while yet again attacking not-the-problem with the full fury of government legislative and bureaucratic incompetence.

"(Ask them to explain how legalizing bringing this sh*t into the country will result in less harm to society, after they've imported in a couple of duffel bags enough of their home-cooked crap to wipe out the entire population of NYFS and Pennsylvania."
You answered your own question
"Junkies OD = Darwin in action"
If enough of this stuff gets spread around, 2 things will happen. Either they die or they're too afraid of shooting up and will quit.
What's not to like?

This is from a newsletter I get for first responders:

This is some nasty stuff.

“As matter of reference it has been
determined that it would only take 2‐3
milligrams of fentanyl to induce respiratory
depression, arrest and possibly death (see
photo of penny). When visually compared,
2 to 3 milligrams of fentanyl is about the
same as five to seven individual grains of
table salt”

I thought it was just my usual.

And Nick, 2-3 mg would be 2000-3000 micrograms.
That's a decimal migrating two or three places the wrong way.
Also assuming they were referring to acetyl fentanyl, and not to medical/pharmaceutical fentanyl.

Eaten, I suppose. Snorted, yes. The ones who want to avoid the stigma of trackmarks and abcesses seem to prefer snorting it.

Good thing I'm not a pharmacist!

It's the same sort of exaggeration they use when announcing the "street value" of seizures. When you seize 200kg but use the street price for grams and just multiply, well, that ain't right. REALLY unlikely that the guy with hundreds of Kg is gonna cut and package out to 1/4 and 1/2 grams.....

In any case, it's nasty stuff and you don't want to contact or ingest it.

In a previous post made by Aesop that's what I said might be happening if there was an opioid epidemic, (which he showed was not happening, at least not legal opoids) - that possibly people were seeking out the illegal ones in a desperate search for pain medication and accidentally overdosing.

Apparently I was prognosticating.. who knew? They'll do these 32 investigations, slam doctors more than they are now, patients will suffer, and more people will die of opoids than ever before as they look to the streets for pain relief.

It's easy to go after big pharma.. they pay and follow the rules, same as doctors. Drug dealers and makers of these horrid things, not so much. Government causes the problem, legal abiding people pay, and desperate people living in pain will pay with their lives.

More brilliance from the folks in our government.