Shut Up And Sing, Monkey So after President Trump endorsed the Republican in the TN Senate race, and celebutard rookie Saylor Twit endorsed the gun-grabbing Democrat jackhole, the (R) has jumped overnight to an 8 point lead. 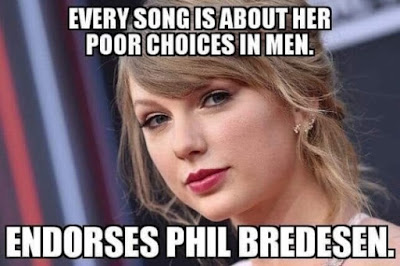 Thanks, Tay, you airheaded fluffbrain. Maybe you could endorse Fauxican Bob O'Rourke in Texas, while you're up.
Or just STFU, and focus on singing, and shut your piehole on politics until you catch a clue.
If we cared what you thought about politics, you could have a show and 27 viewers on MSNBC, like all their other hosts. But I'm betting the dressing room would be commensurately smaller. So we've established T.S. doesn't stand for "Terribly Smart".
"Tragically Stupid" is still up for discussion.
Posted by Aesop at 2:13 PM

Yea, Ol Beto wants her endorsement. It's looking like that blue wave will be tidy bowl washing the likes of Beto down to the sewer where he belongs.

We have this guy running in Michigan against Dem Stabenow. He is expected to lose, so hoping Trump shows up. He is a West Point grad.

The GOP in Michigan has really dropped the ball. The Republican candidates looking to unseat the incumbent Dems haven't a chance of unseating them. I had planned on voting a straight Republican ticket in November, but after seeing these two candidates for my district, I can't with a clean conscience vote for either one... guess I will vote the Giant Meteor Party for house and senate seats!

I just cannot believe that these two are the best the Republican party could come up with for this all-important election!

Gotta admit, I like T-Swift a lot better than I do most celebrities, and up to now she seemed a lot more mature than some of her colleagues. I kind of wonder if she was pressured into making the statement by the Hollywood thuggery.

That said, maybe she could come to Missouri and endorse McCaskill while she's at it.

My husband loves country music (I know, but that's his taste in music). Before anyone questions his intelligence, he's a mechanical design engineer, and you are? Anyhow, he enjoys ACTUAL country music (think Johnny Cash) and thought Swift was the result of some hack TV show or something where they churn out "celebrities", because he's never bothered to listen to her. I have no idea who her fans are, but it's not fans of actual blues-derived country music. That might explain why this isn't playing well in TN as much as she hoped it might.

Ok, she does have a nice butt... She ain't country anymore (she did the crossover years ago). Other than that, she's had about a hundred boyfriends who have broken up with her (maybe it's her and not the guys, just sayin'). She's hitting 30 next year, so the young hot chic thing ain't gonna be lasting to much longer with her hitting the wall in the next few years. One of the Scrummy chillins was a big fan, now her music is banned in the Dad mobile. Oh, plus tick tock on the baby making. Hope it was worth it tay tay???

It sounds like she did everyone a favor . Why the insults?

When you try to punch me in the nose with a lit road flare and accidentally hit the fire alarm instead, you don't get credit for saving everyone. Any "help" she provided was contrary to her aims.

She's an ignorant jackass with delusions of intelligence, and she should close her piehole on the topic. If she wants to opine on musical matters, or show business in general, she's a Ph. friggin' D. What she knows about politics she could fit in a thimble, with room enough left over for her entire brain.

I did not insult her. The word you were probably reaching for is "description".

I got a few names we could add to the list.

Keep it to yourselves, celebs!

Bredesden has lots more trouble now: James O'Keefe just dropped a MOAB on his position, which wasn't easy considering his position changes depending on who he's talking to!