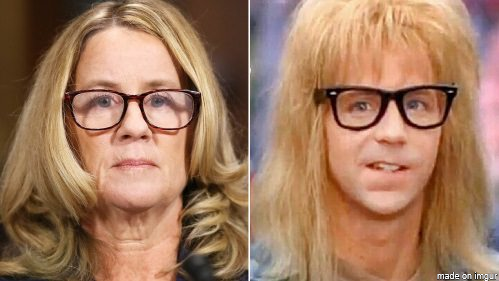 "Social media was set ablaze Tuesday night after a former long-time boyfriend of Dr. Christine Ford told the Senate Judiciary Committee that he witnessed Dr. Ford coaching a friend named Monica McLean on how to take a polygraph examination.


This is in direct conflict with Christine Ford’s testimony under oath to the US Senate.

The friend she coached on taking the polygraph exam is (or was) an FBI agent. So now we've got documentable perjury on Ford's part, misprision of felony by a federal agent, and a credible witness to impeach Brassy Fraud's prior testimony.
Which not only covers the FBI in even more glory when this explodes in their faces, but her friend stands to do 3 years in the federal pen.

Maybe she and her crooked FBI friend can share a cell after her perjury conviction.

DiFi's October Surprise: the gift that keeps on giving. What was it "Vietnam veteran" Blumenthal said? "False in one, false in all."

I could say she'll never be able to work in her field again, but it appears she's accumulated a large sum of money, and has probably been offered at least one book deal.

If things go like they should, she can have her visitors bring her quarters for the vending machines, and write her book in her cell.

You deluded children never learn.
This revelation changes nothing.
Blahsey will continue enjoying the
perks of her life.
No crimes will be paid for in full.
The Rule of Law is long dead in America.
Grow up.

Kill yourself. Or settle down and show some patience.

The moral high ground is always important.
"The moral is to the physical as three is to one." - some Corsican corporal

If for no other reason than as a place to park your artillery, which lends dignity to what would otherwise be just a vulgar brawl.

There's always a reckoning, pendulums swing both ways, and scales get balanced.
Crying because it's not Instant Justice™ ("Just add water!") is childish.

I am extremely settled and suicide is a mortal sin.
Incontestably stating that the Rule of Law is long dead in the former Constitutional Republic of America is not "crying for instant justice".
Grow up.

It's not dead, but it's got some gaping problems.

Nothing a couple/three show trials and another 10-50 smaller ones wouldn't fix.

Its not dead for the peasants just for the powerful...I wonder what it will take for us to want to be powerful...