And the winner is...Mali, by a nose 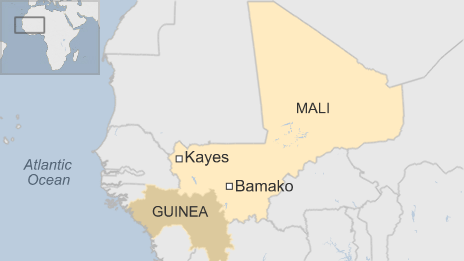 The Mali government has confirmed the first case of Ebola in the country.
It said a two-year-old girl had tested positive for the haemorrhagic virus. She recently returned from the neighbouring Guinea.
Speaking on state television on Thursday, Malian Health Minister Ousmane Kone said the infected girl was being treated in the western town of Kayes.

She was brought to a local hospital on Wednesday and her blood sample was Ebola-positive, Mr Kone said.
The child and those who have come into contact with her have been put in quarantine.
The girl's mother died in Guinea a few weeks ago and the child was then brought by relatives to Mali, Reuters news agency quotes a health ministry official as saying.
Mali is now the sixth West African country to be affected by the latest Ebola outbreak - however Senegal and Nigeria have since been declared virus-free by the WHO.
With porous borders, countries neighbouring Guinea, Sierra Leone and Liberia are on high alert for possible imported cases of the virus, says BBC regional correspondent Anne Soy.

So evidently "borders closed" means "except for two years olds of infected mothers, and their families" in Mali.
Thus not only the girl is infected, but anyone and everyone who went to Guinea, and has been caring for her at home since, has been exposed, including on the 300 mile trip from Guinea to Kayes, which includes right through Mali's capitol city of Bamako.
(UPDATE: That would be 43 people as of Oct. 24.)
Until now, to screw up this hard, we'd usually need to call in the CDC.

Oh this is quite the fun thing to have happen.

Eastern Mali, on the border with Niger, is the stomping ground of Mokthar Bel Mokthar, a real piece of terrorist/bandit work.

This will not end well...
My guess is for rapid acceleration of the spread of Ebola in W. Africa.

BTW anyone see anything further regarding the 2 potential cases in Chicago? The ones that were definitely NOT tested for ebola, but were still placed in quarantine??

If there's ONE good thing about Oboloa surfacing in Mali it would be MBM and his bunch getting it...

Right up until they send a guy with it here (or London, Paris, etc.) before he turns symptomatic...

Aesop understands.
And MBM's bunch are just the kind to do it.

So, we've had four confirmed cases of ebola in the US. There have been others in Europe.

Now, it takes a fair bit of effort to make those trips, and in some cases those were healthcare workers who took at least some precautions in the right direction to avoid exposure. So how can anyone in their right minds really believe that the countries adjacent to the Big Three don't already have hundreds or thousands of unreported cases going on?

"how can anyone in their right minds really believe..." And my favorite, in contention for the "redundant... napalm" award is:
"Lumber yard meet white phosphorus grenade". I so much want to be hopeful, and believe the best, etc. But as this virus continues to outsmart humanity (or some humans, anyway); each passing moment brings us closer to... fire.
Realizing that we must implement travel bans, and iron clad border closures/quarantine - and that it ISN'T obvious to the very people who must implement them... well, the ol' grandpa homestead is in pretty good shape, but this afternoon I am still buying more ammo, food, and ensuring we have plenty of diesel.
Hey, as my dad used to say... "what do you get if you mix Vaseline and gasoline?"
Bueller? Bueller?