Not another one of those “Only Infantry can do Infantry Shit..because Basic, and AIT! … RahRah!” articles.
This shit isn’t that hard.. just be in reasonable shape have serviceable equipment and have reasonable basic fire and maneuver skills.. and from there on the fog of war and serendipity takes over in most situations anyway, especially in the extra dose of chaos one can expect in domestic upheaval.
I would put a fireteam of 4 civilians that have been training with each other recently over some dudes who used to be in the infantry 15 years ago and havent done squat since then, any time of the day.
And twice on Sundays. Everyone in this picture, Every Swinging Richard, once said "This shit isn't that hard..."
No.

It’s another one of those
“If you’ve been to twenty tacticool weekends, SPC Slick kicked your experience curve before he got out of basic training. A year ago.

And he’s twenty-thirty-forty years younger than you, can ruck the fuck out of you, even hungover on Tuesday after a three-day weekend drunk, and is too stupid to quit or be scared of you, because the part of his brain where common sense and mortality lives won’t grow in for another six years, which is true for 19-year-olds forever, whereas every year, Time is beating your dick into the ground.” articles.

Back when we were scrappy, our mostly irregular army outlasted the shit out of a world-class army, and it took substantial support from a major power (look up some time how broke France went doing it, and why the peasants there revolted shortly afterwards) to help us do it.

And at least twice, we’ve won every battle and still lost the war by being outlasted by scrawny, stringy, illiterate peasant hardasses too stupid to quit, but perfectly happy to drop an occasional random round into your ass from a quarter/half-mile away, addressed “To Whom It May Concern”, or bury a vanload of explosives in the road and light your shit up week in, week out, for a decade and more, given five unobserved minutes.

The point being, train to your strengths.
Which if you aren’t somewhere between 18 year-old-recruit and 48-year old about-to-retire sergeant major age, does not mean trying to replicate being a JSOC ninja stud door-kicker, or the Airborne Ranger you might have been 3 to 5 presidents ago. Or never were, and never will be.
Ain’t. Gonna. Work.

But those teenage fuck-authority neighbor’s teenaged shits down the road may be your go-to guys if things get sporty. And come the day, they might really find a safe bed, a dry cave or basement, a hot meal, a place to heal up, a barrel full of supplies, fresh socks and a new pair of boots, or some really nifty intel on OPFOR to be pretty effing awesome.

So maybe wrap your head around what you can do, instead of taking offense at some truth on what you can’t, and won’t.

Anybody can charge machineguns. Some are even young and stupid enough to do it.

But ain’t nobody who can’t learn how to build a field fortified bunker, learn to cache a barrel full of food, or ammunition, or medical supplies, or boots and utes, socks, and underpants, or start making up local, district/county, state, and regional intel files on everything and everyone of interest within miles of their front door, come TSHTF.

SF, or the media at least, thinks they train Green Berets every year during Robin Sage.

What they’ve really done is make a multi-county area of NC effing Ph.D.s in guerrilla warfare, and I’m talking about the farmers and shopkeepers and garage mechanics who role-play their support force and ersatz insurgent commandos. Guys who can - and do - buy, beg, borrow, steal, or stash all the stuff somebody'd need to run a guerrilla war. 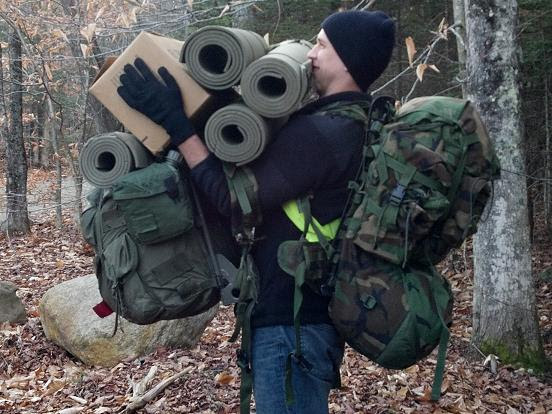 Read up on that, and tell me how you’d favor 4 guys who train together, vs. 50 other good old boys with pickup trucks who’d keep them hidden, informed, supplied, fed, safe, and mobile, and can have their pick of which 4 guys they’ll choose work with.

Aesop,
Look you cantankerous old cannon cocker, I am not 48 and about to retire (I have a few months before I hit that mark and you should know that diamonds and stars are for women and guns and bombs are for real men. Ok, enough with the banter, although if I had known you were an Arty alumni to start with I would have been giving you shit all along. You do get to fight in this next war though, being combat arms and all! I have to say, that I gain more out of your comments then I do the articles over at WRSA. Mostly because of obviously shared experiences, and you remind me that I am on the right track in my thinking as Ms. Duval and I move into the next phase of our lives after 30 years of the Suck. Truly, thanks for that! One note, the second half of my GI bill is going to be spent for basic EMT, first half goes to HVAC. I know I won't be on your level for obvious reasons but any thoughts you could share so I can steer myself in the right direction would be much appreciated.

MarshFox, congrats. (I probably would have gone the master guns route if I'd'a stuck around. But I have a feeling the Corps would've wanted me as a Sergeant Major, whether I liked it or not. Didn't stick around to find out.)

1) Get that, (and the workbook as well). New if you can, gently used if you must, because for many courses it's the EMT text, and there's nothing you need to know as an EMT that's not in it. You'll be referring to it for years.

Working your way through it will give you a great leg up on the material, and you'll cruise through the certification class you'll take anyways.

2) Before you get out, get a basic BP cuff with an analog dial, and a basic stethoscope (online, or nursing/uniform shop), and have a corpsman or three teach you how to measure a BP the right way, on real people. A live instructor for that skill is better to start than YouTube learning modules. For that matter, pick your brighter corpsmens' brains a bit, or even those of a bright young MedO if the opportunity presents itself. Esp. if you start poking around EC&TOTSAI before you punch out. (Which you should do, if possible.)

3) After EMT, if you want to up your SHTF game, get your hands on the current edition of Special Operations Forces Medical Handbook, 2d edition, ring-bound.
https://www.amazon.com/Special-Operations-Forces-Medical-Handbook/dp/0160808960/ref=sr_1_4?s=books&ie=UTF8&qid=1501946446&sr=1-4&keywords=special+operations+forces+medical+handbook

It's the SF medic manual for their 19 Delta medics. (Do not waste time/money for the dinosaur relic ST 31-91B from the 1980s that you can find everywhere; it's decades out of date. Unless you get one for free, and just for historical reference.)

The SOFMH is the bible of SF medicine, and the best book on doctoring for the hopelessly undertrained in crappy situations there is. Including things like combat trauma, TCCC, and CBRN medicine, not covered in the civvy side of life.

Other than that, trust your gut.
After 30 years in the Corps, you getting the EMT cert will be like taking a simple MCI course. The hardest part will be marveling at how the basic material will challenge most of your college freshman-aged classmates.

Let me know how it goes for you. Any questions happily answered.

Aesop,
Ok, your second to last line has Ms. Duval and myself rolling on floor at this point. Not sure how I am typing this.Thank you though for the great info. Btw, please don't stop spreading common sense and reality, it is an uncommon virtue at this point!

I will take your 50 rednecks/good old boys in pick-ups over 4 somewhat trained shooters any time. War runs on a multitude of supplies, medical treatment and a safe place to rest...not bravado. Besides, those rednecks have lots of guns themselves, and also know how to shoot...and how to hunt.

I never served, but the wetware I have, combined with lots of information gathered over the years from people who did (and their books and articles), gave me that pretty easy answer. The bravado guys mean well, but generally suffer from some pretty serious self esteem issues (and maybe some key undersized anatomy).