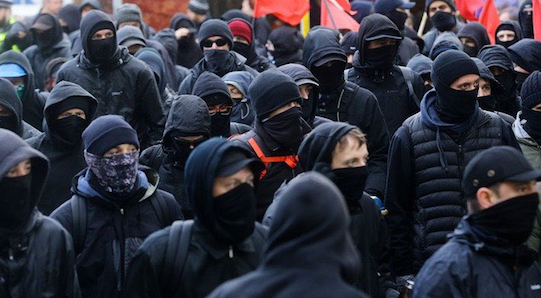 
When minds become captive to the propagandist’s boogeymen, our survival mechanisms go into effect and we feel we must slay monsters, whether real or imaginary. This is especially true when a mob of supposedly like-minded folks come together to face off against their common enemy. Like in Charlottesville or any other place where a governor might abuse his power to promote riots by making sure there is no law enforcement present to maintain order. That was always the real point of promoting the riots in Charlottesville and so many other places by getting the police to stand down. The purpose of the media collusion is to get their movie running 24/7 in as many heads as possible.
Unless we quickly become more vigilant to this ruse, it’ll be too late when we realize we’ve been manipulated by Stalinists all along.

None of this is new. The archetypal agitation expert Saul Alinsky considered resentment an absolutely essential tool for replacing freedom with totalitarianism. All in the name of freedom, of course. If you study history, you’ll note how all tyrants project their own intentions onto their perceived opponents. It’s a well-documented pattern in all genocides. Fascism can only come to power in America, for example, through an echo chamber repetitiously promoted as “anti-fascism.”

Free speech is an essential antidote to any form of slavery.

Consider these choice quotes from Alinsky’s book “Rules for Radicals,” which serves as a guidebook on the art of cultivating hatred in people: “The organizer must first rub raw the resentments of the people of the community; fan the latent hostilities of many of the people to the point of overt expression . . . an organizer must stir up dissatisfaction and discontent; provide a channel into which people can angrily pour their frustrations . . . your function – to agitate to the point of conflict."

Here’s another choice quote from that piece of work: “The one thing that all oppressed people want to do to their oppressors is sh-t on them.” The trick is to get people to conjure up the illusion of white hoods behind every bush, and redefine the word “hate” so it applies to anybody who thinks a thought independent of elitist groups like the SPLC.

Alinsky knew that a few power-hungry elites like himself couldn’t simply undermine a free nation on their own. He needed drones to do his bidding—mob mobilization papered over with the euphemism “community organizing.” This is why totalitarians—from Marx to Lenin to Stalin to Mao to Castro and so on—always depend upon agitating and mobilizing masses via the abuse of mass media. Real debate is anathema to that goal, which is why free speech is always such an enemy of tyrants. Free speech is an essential antidote to any form of slavery.

This essay should be condensed and posted as an op-ed in the WSJ, and headlined by folks like Breitbart and Hannity.

And tell me again why you'd want to help this game along, by providing the opposition to give TV producers the visuals they need to sell their bassackwards narrative.

Recall only a few months ago, when it was only the Leftards wetting themselves in public, even their own people told them to STFU and stop crybabying.


They only started getting traction when jackholes on the fringe right started giving them the exact boogeymen they'd fantasized about in their heads.
Well-played, Team Fucktard. Now knock that shit off, and let them go back to wetting themselves. The cops - when they aren't castrated by TPTB - generally do better when they only have one group to gas and thump on. Either way, leave this to the Shitbaggers, and let them own the fucktardery, 100%.


And BTW, it'd sure be a real shame if somehow the busses that brought them to the riot all spontaneously caught fire while the Shitbaggers were busy rioting downtown.

Who exactly is the "jackholes on the fringe right"? Is it the neo-NAZIs? NAZIs are socialists just like these scum leftards of antifa. But the media wants ignorant Americans to believe nazis are right-wing when the truth is they are left-wing. This needs to be called out repeatedly by everyone on the right to educate undecided citizens. I can only assume you are speaking of the white power movement who I agree are jackholes but again they are not on the right wing. They are as intolerant as the left. Intolerance is a left-wing belief. The far right wing should be anyone who fiercely believes in and fights for Freedom and Liberty! but we have allowed the left to frame it as nazis and white power and any other boogeyman they can throw in. This has to stop. We cannot let the left frame the issues and terms of this struggle. When we let them do that we start out already behind.
Thoughts?

A difference without a distinction.
The fact remains that however you fill out the placecards, the clowns in Charlottesville are more or less our monkeys, however far they are from the rest of the species.

If it were possible to disown them and leave them to their fate with a wave of the hand, I would happily do so, but it doesn't work like that.

Just to be clear, what clowns are whose monkeys exactly? ALL the idiots in Charlottesville were enemies of freedom. It was commies vs nazis. Both of whom belong on the left not the right side of the political spectrum. I hope we agree on that.

Not quite true.
I've heard from people who were there, and not everyone there was WhitePower/neo-Nazi, just like everyone on the other side was not all hardcore Antifa. There's even some pretty good anecdotal evidence that some of both were planted and bussed in to play the parts.
But there were enough real Nazis and real communists to get the visuals required, which at the end of the day, was the purpose for the whole thing.
The media was there in droves, the governor wanted a riot, and he set the conditions so that he got it.
QED
We had a president and AG just recently who gave guns to Mexican narco-terrorists, who then killed federal agents and Mexican police, as well as civilians with them, just so the DNC could try and advance an anti-gun narrative here in the US; why should it be difficult to imagine that exactly the same sort of amoral political shenanigans were in play in Charlottesville?
Look at how fast and how shrilly the media tried to tie the whole neo-Nazi tail to Trump, the GOP, and everyone who voted the other way.

The entire country is being played, to serve the Left's narrative.
Not only is everything not as it seems; very little of it actually is.

Ok that makes more sense. We agree more than we disagree. I even read very recently that some of the antifa and white power pukes rode in on the same bus and the white power organizer worked for CNN. I still think we need to make the left own all their socialist factions. Anyway, good talk.