So, You Wanna Play Ball, Scarecrows? Apparently some SJWs feel oppressed by having military veterans in college with them.
Their solution, in the inaugural screed of the U CO/Colorado Springs Social Justice Collective Weekly is to ban them from the university altogether. Bravo, Comrades! Well-played.

Peter describes his reaction as a RCOB moment. I'm a bit more even-tempered, but no less pissed. Here's the screed in question: 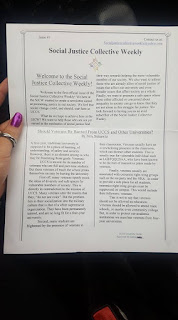 Cut off all federal funding (that would be all student loans in toto) to any institution which discriminates in any way against military veterans. The responsible PTBs there will shut that rag down in a NY minute when their paychecks are the ante for being a public jackass.

And refer that screed to the EEOC and federal agents for investigation of a federal civil rights violation. Somebody wrote it, and somebody else distributed it, which fulfills the evidentiary point for a criminal conspiracy.

Answering charges of conspiracy to deny civil rights to someone in federal court will be a lot less funny during opening arguments than it was when someone was typing it and taking weed hits off of a potato bong. Doubly so if any official funds were used to produce it.

That'd be the last of that noise you heard for a generation or two, minimum, and somebody (Terry Steinawitz, call your office...) will be finishing the semester at the local JC, mark my words. And they won't get the cleat-holes out of their junk for some months, once the bleeding stops.

A letter to the White House, CC'ed to the AG, Dept. of Education, their congressperson and senators, their state's governor, reps., and senators, the EEOC, and FBI should get the ball rolling, esp. if you also send copies to local and national media, and a few talk radio pundits you could think of in about two seconds.

Any veteran at the school who "feels discriminated against by the hostile environment" has standing to do it, and then it's a full-on BBQ.

I'll get the popcorn.

It wouldn't hurt my feelings any if the local veterans on or off campus, the ROTC, and some visitors from another institution of higher learning also located in Colorado Springs dropped by to let campus officials, and Dipshit Steinawitz, know of their personal heartburn and displeasure at this sort of silly $#!^.

But if you'd like to register an opinion with them directly, their handy contact e-mail is
socialjusticecollectiveweekly@yahoo.com.
Posted by Aesop at 11:42 AM

As The Darlin' Daughter frequently says "I'm gonna hafta stop saying "How stupid can you be?" because too many people are taking it as a challenge!"

The Chancellor kinda nipped that crap in the bud; the author is somewhere looking for some salve, or a safe-space for their feewings.
UC statement at: http://pressreleases.uccs.edu/?p=3424

That's a joke what the chancellor said. How about take action and don't allow this rag to be posted. If we turned the tables and published a rag that certain inviduals with their naturally loud mouths and bullish behavior would disruptive to the class because of their religious values would that be ok to post. Veterans another group to single out....here we go. This is nothing but hate material.