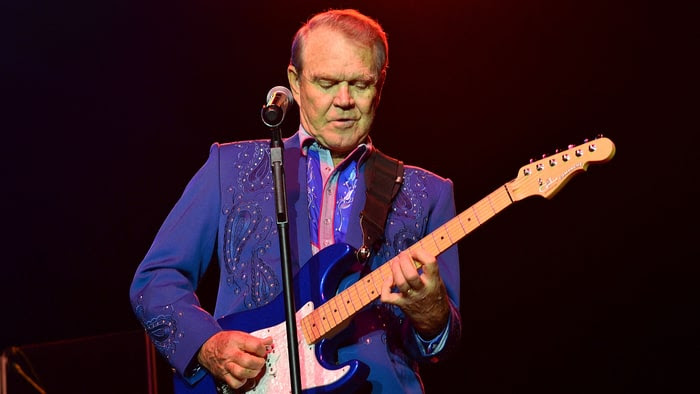 We sadly note the passing today of virtuoso musician/composer, country-western legend, TV and movie star Glen Campbell, 81, due to complications of Alzheimer's disease, first diagnosed in 2011. He died at the assisted living facility he was placed in some years previously.

We hummed and sang his songs growing up, watched him hold the screen with John Wayne (in True Grit, for which Wayne won his sole Oscar) and come off none the worse for wear,

and listened to him without realizing it, as he was in fact the sixth Beach Boy, playing on their albums, and touring with them before establishing his own musical presence.

He was, near as one can tell, exactly what he appeared to be in front of camera and microphone, a dropout who moved to L.A. to seek fame and fortune, and found both, selling 45M records in a six decade career, having just earlier this year released his final album of studio work, filling countless auditoriums on tours, and hosting a musical variety show with prodigious crossover to all fans and age groups.

In 1963 alone he appeared on 586 cuts [for other bands and artists], and countless more throughout the decade, including the Byrds' "Mr. Tambourine Man," Elvis Presley's "Viva Las Vegas,” Merle Haggard's "Mama Tried" and the Righteous Brothers' "You've Lost That Lovin' Feeling."

In 1968, one of his biggest years, he outsold the Beatles.


He was the total-package country musician, growing up seventh in a family of twelve to a dirt-poor sharecropper in Arkansas, marrying four times, and doing the usual up-and-down seesaws of life and career that mark every good country song.

Here he is moving back up again, and doing rockin' country decades before Garth Brooks took a poke at it:


He was even more the phenomenon, because he didn't read music, but picked up songs in one play-through by ear, and was widely acknowledged as one of the greatest guitarists to ever pick up the instrument.

One helluva ride for a musical prodigy, and a true American original.

Enjoy him taking most of the legends of country music to school in this brilliant cut:


You could go to YouTube and do nothing but watch video after video after video of Campbell absolutely crushing it over and over, and it wouldn't scratch the surface of the enormity of his talents. It would be anything but a waste of your time, nor any small tribute to such a maestro.

While we share in a small measure the sorrow of his family at his passing, how fantastic that he lived such a life, and left behind such a phenomenal body of work for others to enjoy long after his departure.

Update: You've gotta watch this interview with Alice Cooper regarding Glen Campbell and his passing.

And somebody call Mike Rowe, and remind him that Glen Campbell nor anyone else ever wrote a Billboard Number One hit﻿ about a Wichita cubicle dweller with a college degree.
Posted by Aesop at 2:19 PM

He claimed, before True Grit, that he'd never acted in a movie. He made the same claim after True Grit. The man knew his limitations.

That 2nd one was great. He maid that guitar sing. Hadn't realized he was that good and with such ease. Willy didn't know what to do. Another sign I'm getting older.

An all-time favorite artist of mine.....the suggestion has been made many times to new mothers contemplating a quick return to work after calving is his song 'Hand That Rocks the Cradle, Rules the World'. THAT makes this pansy kinda choke up.
soapweed