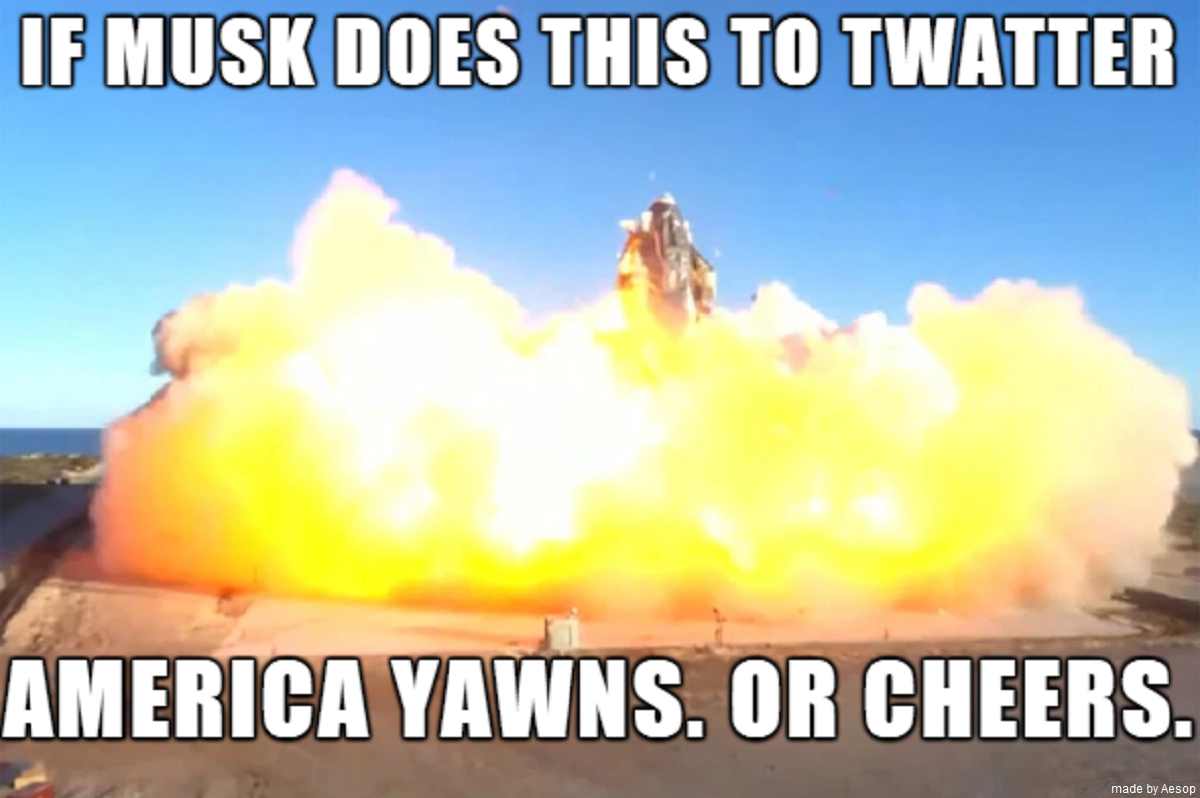 Tam seems utterly convinced, due to "insider experts", that Twatter is imminently in danger of crashing and burning.

Alongside the minor malfunctions, the Twitter engineer believes that there’ll be significant outages on the horizon, thanks in part to Musk’s drive to reduce Twitter’s cloud computing server load in an attempt to claw back up to $3 million a day in infrastructure costs. Reuters reports that this project, which came from Musk’s war room, is called the “Deep Cuts Plan.” One of Reuters’s sources called the idea “delusional,” while Alan Woodward, a cybersecurity professor at the University of Surrey, says that “unless they’ve massively overengineered the current system, the risk of poorer capacity and availability seems a logical conclusion.”

Meanwhile, when things do go kaput, there’s no longer the institutional knowledge to quickly fix issues as they arise. “A lot of the people I saw who were leaving after Friday have been there nine, 10, 11 years, which is just ridiculous for a tech company,” says the Twitter engineer. As those individuals walked out of Twitter offices, decades of knowledge about how its systems worked disappeared with them. (Those within Twitter, and those watching from the sidelines, have previously argued that Twitter’s knowledge base is overly concentrated in the minds of a handful of programmers, some of whom have been fired.)

We repeat for emphasis:

1) How much excess capacity does Musk and Twatter require, once he whittles back the unwanted and unnecessary input of the 90%-of-Twatter-posting Wokebots?? Get rid of 90% of the traffic, and you can function until Hell Freezes Over on 10% of capacity, and hire talent long before it ignites.

But let's say he does run it into the ground. That begs the bigger question:

Since Twatter was nothing but a wokebot fool's paradise, if all Musk accomplished was to buy the ginormous P.O.S., just to run it into the Lakehurst Naval Air Station and dock it exactly like the Graf Zeppelin Hindenburg: gloriously aflame, with the survivors tuck-and-rolling to safety while the smoking hulk of the superstructure crumbles into a memory, the response of about 60% of America would be "Hallelujah! There IS a God!".

3) What makes anyone think that the programming "institutional memory" provided by the hordes of fired SJWs is irreplaceable except by other programming SJWs???

I'm pretty sure that writing code is writing code, and if he outsources the whole silly enterprise to Bangladesh, and Silicon Valley starves to death this winter, the cries of delight from most of the country would remain "Hallelujah! There IS a God!".

Heads he wins, tails they lose.

He either saves this P.O.S. on his terms, or runs it into the wall at 200 M.P.H., leaving poor Elon with only Tesla, unquestioned dominance of space transport for the next decade, and a spare hundred billion dollars or so to fall back on. This is not the catastrophe portended.

Pick on Fedora Jesus all you like. You're missing the point, and the only ones getting themselves into a tizzy over the fate of Twatter are the people who ran the bots, the fired woketard deadweight staff (but we repeat ourselves), and you.

Most people in America wouldn't have given two sh*ts if Musk simply dropped a Falcon Heavy module onto Twatter corporate HQ "by accident" the day after he bought it, because they rightly regard most social media as both unconscionable revelation/intrusion into one's private life and/or a colossal NSA Trojan Horse, plus a waste of bandwidth to begin with.

It's Musk's toy to play with now. If he succeeds, the naysayers look foolish. If he slams into the ground and leaves a smoking hole, the people who hate the naysayers cheer. And at that point, the people carrying water for the woketards' jeering are hard to distinguish from the whiny woketards themselves. Just saying.

Let him play with his toy. Even if he smashes it. It's what his toy means, i'n't it? 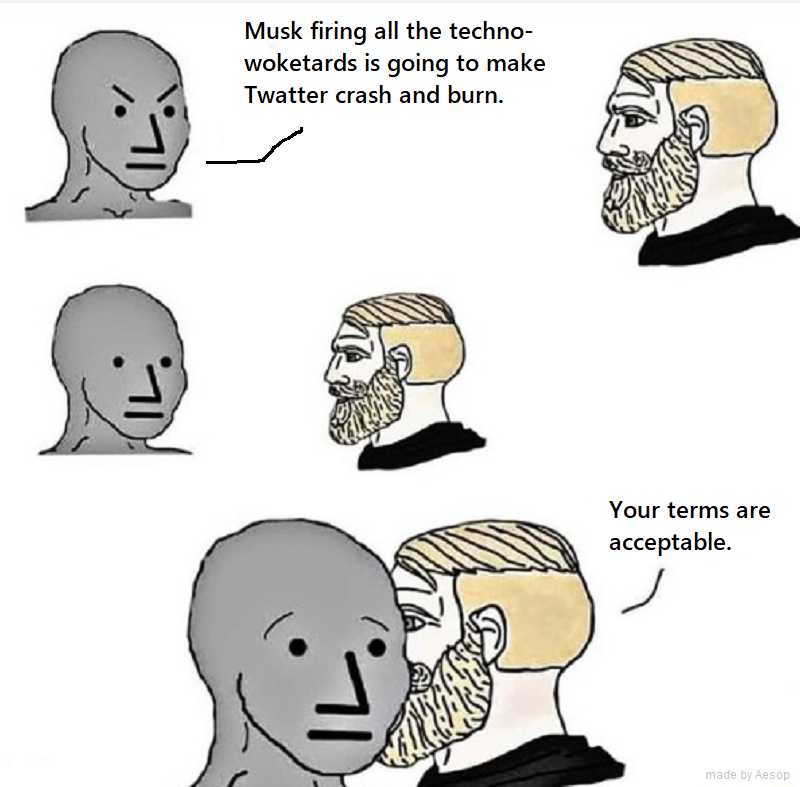 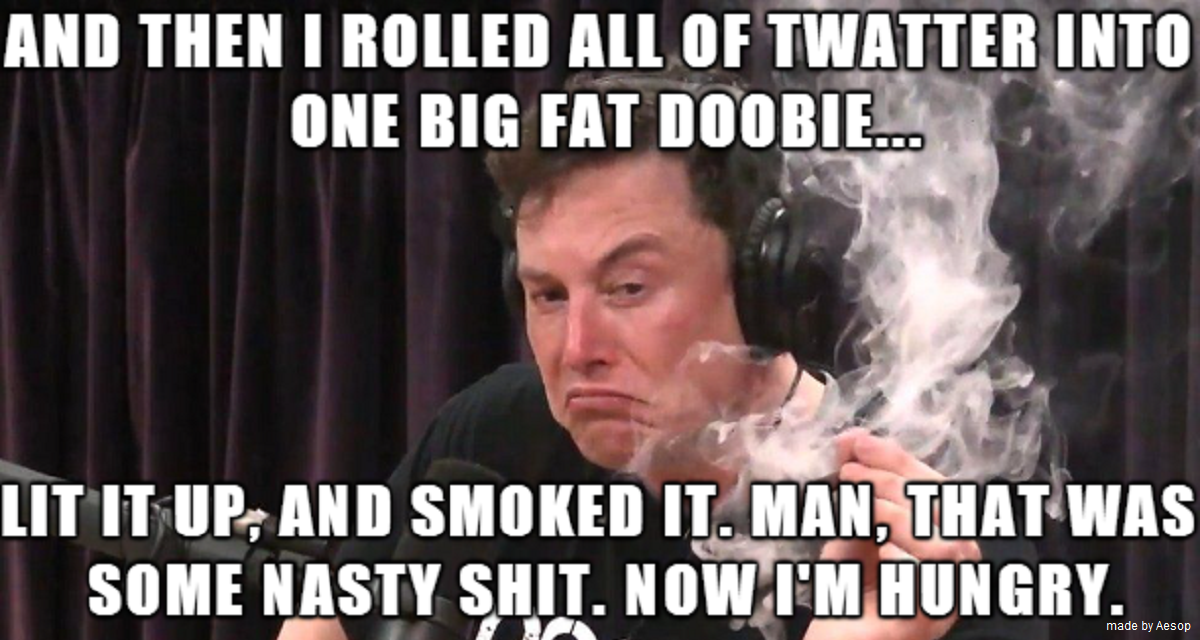 Labels: I meme to misbehave, Point/Counterpoint


"if all Musk accomplished was to buy the ginormous P.O.S., just to run it into the Lakehurst Naval Air Station and dock it exactly like the Graf Zeppelin Hindenburg: gloriously aflame, with the survivors tuck-and-rolling to safety while the smoking hulk of the superstructure crumbles into a memory, the response of about 60% of America would be "Hallelujah! There IS a God!"."

I do not, and have never used any social media. And I have no idea why people think it a necessary item in their lives. My only contact with it is seeing an embedded comment on some blogs. That convinces me even more that I've made the right choice.

Same here. I'm sure he has people who have looked at users versus capacity, and I suspect he has also planned for a temporary drop in income while he implements his changes.

Fucking Awesome write up Aesop. This part is so true:

"And at that point, the people carrying water for the woketards' jeering are hard to distinguish from the whiny woketards themselves."

If it does go down the shitter, look for the FedGov to (officially) take it over as a propaganda tool like PBS/NPR.