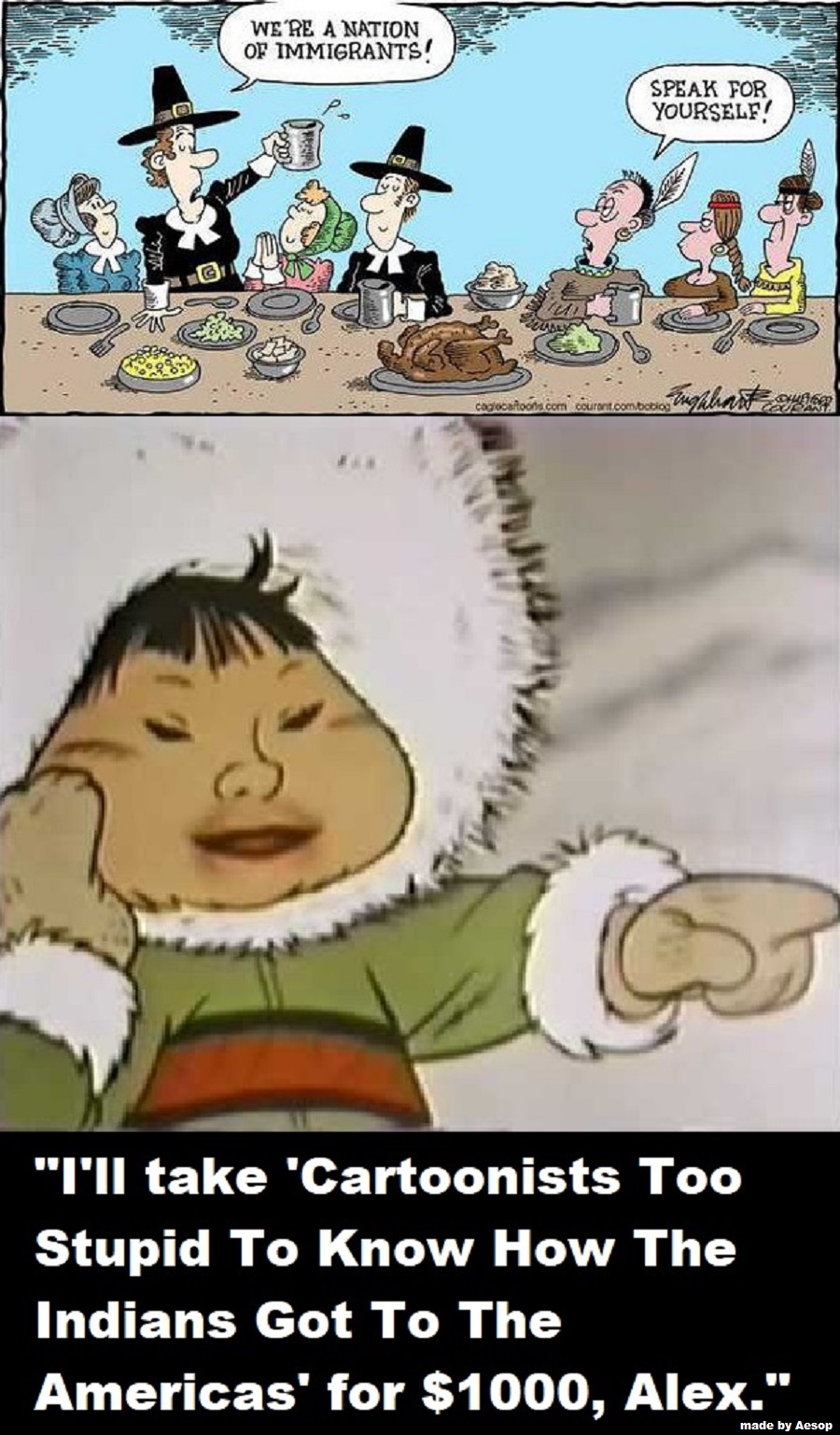 Just because neither some drooling crayon merchant at the Hartford Courant, nor any of his woketard editors, know anything about how every tribe in the Americas got here from somewhere else, it doesn't change history. FTR, there's no one on either continent of the Americas who qualifies as "indigenous peoples", since ever. Everybody here, from the Arctic to Tierra del Fuego, came here from somewhere else, or descended from those who did. You could look it up. History here didn't start in 1492, nor 1620. Only idiots make that mistake. And they keep doing it, over and over. We're not a nation of immigrants. We're two continents of immigrants. Anyone who doesn't like it is welcome to go back where they came from, and nobody has first claim on anything here, except by current possession.

Truer words have never been spoken. Every thing started in the golden crescent which has been used and abused for so long it is a desert.

Kind of makes on wonder.

Spot on...a truth hidden by every academic who WANT to believe otherwise (so in their heads it's true). For all we know the Norwegians landed first, those boys got around.

Asians, aka Indians, are NOT native to North or South America.

I seldom see reference to how the "Native Americans" got here via the Bering land bridge, when the ice age resulted in a drop in the ocean level on the order of 300 to 400 feet(!). As recently as 15000 years ago it was drastically lower than today, so many of the early settlements and evidence of their migration south along the sea shore is now deep under water. And we are to be terrified about rising sea levels orders of magnitude smaller?

Forgetteth not 1607; my folks were here in Jamestown for 13 years (and survived it !) waiting for the Massachusetts Latecomers to arrive and suck up all the publicity.

Not forgotten, just totally ungermane to the 'toon.

As one example of territory changing hands is the Black Hills of south Dakota/Wyoming. Per Wikipedia:

"Native Americans have a long history in the Black Hills and consider it a sacred site.[6] After conquering the Cheyenne in 1776, the Lakota took the territory of the Black Hills, which became central to their culture. In 1868, the U.S. government signed the Fort Laramie Treaty of 1868, establishing the Great Sioux Reservation west of the Missouri River, and exempting the Black Hills from all white settlement forever. However, when settlers discovered gold there in 1874, as a result of George Armstrong Custer's Black Hills Expedition, miners swept into the area in a gold rush."

"The Arikara arrived by AD 1500, followed by the Cheyenne, Crow, Kiowa and Arapaho. The Lakota (also known as Sioux) arrived from Minnesota in the 18th century and drove out the other tribes, who moved west."

This is one example of the myth that native americans always occupied and owned the lands of North America.

We're all tenants here, and only temporarily landlords.