Shrillary, your DoJ predecessors, and about half the FBI and CIA, for openers.

The Coup Cucks Clan rides again, and Barr turns out to be just another backroom buddyf**ker.
Let the Senate impeach him. Maybe he'll need to replaced by Ann Coulter, if not Alex Jones, to get this done right. So far, Abbott and Costello, or the Spanish Inquisition from Monty Python would have been better AGs.

They keep wanting to push a two-tier justice system.
Let's see how much pull they've got when the game is torches and pitchforks, and the sentence is hung by wire at the end of a lightpole.
Apparently, nothing less will avail, and they just keep pushing for nothing less.

Bonus: How Irish put it. 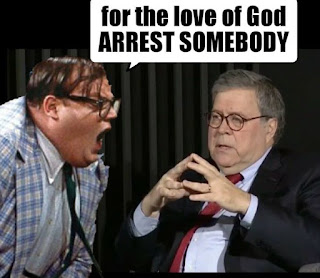 Labels: I meme to misbehave, justice

If a body somehow thought we got to skip WORoL, you were mistaken. It's Byzantium all the way down.

I've got rope! Lots, and lots of rope!

Why would they drop Andrew McCabe???
Maybe it's all getting swept under the rug...
Maybe Andy rolled over on someone higher up his particular food chain...
Patience and perseverance are vital character traits of successful investigators.
I personally think the investigation is going to quietly evaporate. But I could be wrong. But either way it's still too soon to light the torches and sharpen the pitchforks. Patience dictates that we wait a bit longer.

RubyRidgeBarr isn't going to throw anyone in prison.

It's almost time for the party to begin

I had high hopes when Barr was appointed after Trump fired do nothing Sessions. I'm beginning to believe I was mistaken.

Barr is another Deep state clown. These so-called investigations are designed to give the appearance of doing something about the corruption of the DOJ. He does NOT want to change the culture at the DOJ. He is perfectly happy to keep the status quo. He let the clock run out on Brennan lying to congress. He is letting or has let the clock run out on the espionage of Hillary Clinton's Email server, and the list goes on and on the CIA and FBI are hiding documents from Durham. Whats he doing about it. NOT A DAMN THING. The only way things are going to change for the better is a second civil war


I must say, the part about lightpoles got me a little moist. In a totally manly way.

"Patience my ass, I'm going out and kill something" was a poster I used to have, featuring two buzzards sitting on a (dead) tree branch. Wish I still had it.......