For the seven people who read this blog, and the 8 billion who don't, who don't know what The Ten Essentials are, we provide the following list as a public service:

We bring this up, because of stories like this one over at Zero's blog, better titled: "Darwinian Selection Thwarted Again", and a reminder that anyone who ventures off the paved road into the bushes so much as ten feet, who doesn't have these items or equivalent on their person as a matter of course is not "sort of a survivalist", but rather, exactly a jackhole moron, best used as a food supplement for apex predators. No, really.

It should be noted that of the above list, the Nitwit Couple in question possessed exactly zero items on it, per all accounts. And they live in the Bay Area. Now, see if you can guess why Nancy Pelosi keeps getting re-elected there.

We further share that we do not even venture to so much as Disneyland, from which we could walk home if necessity presented itself, without all ten items on our person (yes, even the knife; there are ways, gentle readers ;) ). Let alone travels farther afield than that.

{For the Moron Posse, this is just the Ten Essentials, not the Everything-You-Need Ultimate Survival Kit For Bugging Out Forever. If this is news to you, you're not tall enough for this post. We note again, this in in reference solely to the Nitwit couple above, who possessed not one single item of it, not for surviving the Zompocalypse after falling off your sled in the Iditarod. FFS, get a clue.}

And we further point out that you may rely on this testimony that while watching the video of search and rescue drones retrieving this pair of nitwits from the clutches of a NorCal dayhike that started out as a three-hour tour, our most fervent wish for the pair was not "how wonderful that they were found alive", but rather

"Put them back! Mother Nature isn't finished with them yet!"

Don't Be Those Guys.

UPDATE:
We love it when perennial troll morons pathetically try to sharpshoot our wisdom, by posting their idea of a "better" picture, and predictably does another epic faceplant: 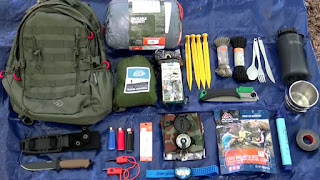 Word To Your Mother, Cub Scout:

Our picture was illustrated by an assemblage of gear from REI, a high-end outdoors chain that supplies things like expeditions to Mt. Everest and such, as well as millions of hardcore outdoors enthusiasts, and contains the exact Ten Essentials (and then some) proven over decades by The Mountaineers, who have promulgated the very concept of Ten Essentials since Ever.
Your gear was sourced from Wal-Mart, entirely from the cheap China-made schlock they retail.

The GPS in our picture is better (and pricier) than the entire contents of your "better" picture, and the SOL space blanket in our sourced pic will outlast the tarp and backpack in yours. And if you tried looking at our picture, you will note that it has, indeed, "multiple sources of combustion". I posted the picture because it is the exact Ten Essentials (plus a couple of extras) . (You could have looked it up yourself, if only you could follow links.)  Not because it's the Everything-You-Need Ultimate Survival Kit. This is Strawman Fallacy stuff for mid-level morons. So much for brilliant analysis from the Halfbright Scholar of the Great White North.

I make this blog look easy because I'm far beyond your 23 IQ points.
Go back to telling us that hobby drones will never be weaponized, because it's unpossible.
And stop making it so darned easy to point out your foolisheness. I hate always being the one to kick the retard. And it always takes twice as long to explain things to the Short-Bus Kid. I wish that didn't always turn out to be you, with a tedious predictability, but it is. Over and over again.

Meantime, don't quit your day job, Homer. And enjoy the extra blog-looks you'll get for free just for being Comedy Relief. Again.
Posted by Aesop at 11:37 AM

water - camel type backpacks are great. You can carry all of the other essentials in the pack along with your agua. I also carry water purification - life straw or tablets.
fire (matches, lighter)
fire starter (magnesium bar, flakes, ribbon or fire starter paste)
food
space blanket
light (rechargeable)
power pack
map
compass
knife
first aid
wind breaker/rain jacket/poncho.
2 beers (optional?)
On the trail for day hikes a lot and all of these items are always in my pack.

Aesop,truly appreciate your opinions and observations.

You do pubic service? I don't even want to know!

OK, what "ways" would you use to get a knife past the Mouse's metal detectors - purely on a hypothetical basis, if you were even interested in doing something like that? [I'm asking for a friend, who is writing a detective novel about a crime in the Mouse House, and he wants it to be as authentic as possible].

Put it in your phone case.

put it in your shoe.

put it behind a belt buckle

put it in the kid's stroller

put it in a camera bag

Um, what's hard about this?

Carry a stone knife, a fiberglass laminate knife, even a hard plastic knife. Maybe not as good as a modern steel folder but better than no knife. And you are training, amirite? I recommend the Filipino arts of Arnis or Eskrema. Quick, effective, and btw, they can be done with a stick.

ASM826, those are good ideas. S-glass fiberglass would be best. Not sure how good it would hold an edge, but it would stay pretty pointy.

"What's so hard about this?"

Disney security, unlike the TSA, knows WTF they're doing, and none of those clever ploys would work, except possibly the stroller idea. If you'd been there in the last five years, you'd know that. And having a stroller with no toddler is generally a dead giveaway. But keep trying, man. The penalty for failure is only six months in county lockup, hereabouts, and a second offence becomes a felony party foul, IIRC.

I'd suggest not quitting your day job for a life of crime.

@Texan
The correct reply starts out "If I tell you,..."

But a bit of thought, and any number of visits to any of the D-empire for familiarity, may suggest it to you.

If someone wants to do harm they could get themselves a large coke Extra Ice, Place the ice in their spare sock and knock someone into next year. So there is your Mouse House Who done it. Maybe have to finish the job with your spare shoelaces if they are stubborn.

The real problem is the HD "eyes" all over Mouse Land and the Quick Reaction Force that has use of hidden doors and tunnels to intercept you in real time video. No changing your clothing is likely not to work either as they have "eyes" even in the bathrooms.

Better to zap a target off Disneyland. The local yokels sometimes ask Disney for help with high profile cases.

"Disney security, unlike the TSA, knows WTF they're doing, and none of those clever ploys would work,"

Sorry, must be different in Cali than Fla, figured it's corporate and would be the same. All those things would work in Fla. What absolutely doesn't work is being white, male, middle aged, with an untucked overshirt.... and entering singly to avoid the cluster at the bag search with all the female members of your party. That's an invitation to extra scrutiny.

Early in our marriage CINCHOUSE was POed at me because I refused to take an unscheduled hike up a trail from a random parking spot to see something she had read about in a tourist guide.

We were traveling in a rental car, having flown into the area. I did not have my normal gear with me and she did not have anything like proper foot wear and I was not familiar with the area or the type of terrain.

In the ensuing years she has either learned to trust my judgement, or has decided to put up with my paranoia. I know which explanation I choose and don't confuse me with the facts.

@RandGC: judgement vs paranoia. Mine is also getting around to the idea that having survived about 35 years before meeting her, including a stint in the Corps, that I just, occasionally, might know what I'm talking about.

Actually, I always know what I'm talking about b/c if I don't know about something I keep my trap shut and ears open. She may catch on eventually.

If I may offer one addition. A metal container of some description that can be used to boil (sterilise) water. Maybe it can be in the form of a canteen.

I live in the Pocono Mountains in PA (having moved here from PRNJ last May). The community I live in has a lot of part-time vacation homes and rental homes as well as full-time residents like me, and a lot of the renters come here from NY and NJ (just as my wife's family did for years before I married in). It's amazing to me how many people get their knowledge of wildlife from Disney movies.

Yes, deer are pretty. We see them in the yard regularly, and my wife never gets tired of looking at them. Stay away from them (wife knows this, thankfully), they ARE wild animals, and they will f*ck your sh*t up if they feel threatened. Don't try to pet them, and for God's sake don't try to FEED them. Oh, as an added bonus, in the summer, those black things all over them are ticks, which if transferred to you can give you Lymme's Disease. You don't want Lymme's Disease. Bug spray is a MUST in summer, and do NOT go out in the grass without shoes and socks (not sandals) on.

Don't get me started on the Pocono Garbage Bear (there are reports of a huge, meaning fat, black bear living in our community). Or raccoons. Hell, last summer my wife put out a humming bird feeder, while they're really cute and pretty, they're also highly territorial and WILL attack another bird drinking from their "flower". They make a really loud smacking sound when they collide in mid-air.

Nature is red in tooth and claw people. If something isn't actively trying to kill you it just doesn't care if you live or die, and the reward for stupidity is you become food for organisms that wouldn't ordinarily prey on you.