This Has To Be Said - BFYTW 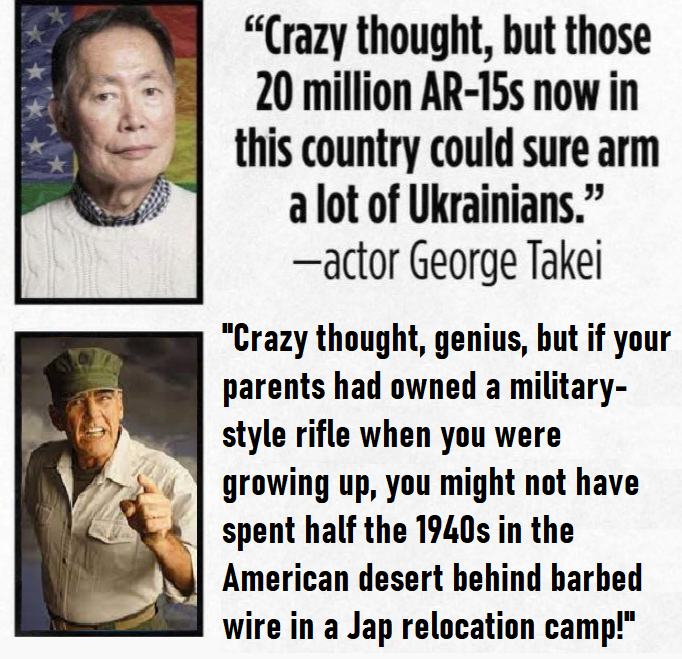 Roy says:
1 George did not spend time in the desert. His family spent time in a camp near Pine Bluff, AR. (Now has a museum; well worth one to two hour visit if in the area). The camp enabled its occupants to live better than did the locals. And conditions improved over the course of their internment aka incarceration. But they were still not free.

2. Near universal agreement that the internment was, while perhaps understandable, not really well considered, not only not actually necessary, but counterproductive.

3. Had those of Japanese genetics via armed warfare resisted internment: a) They would have provoked a fanatical, see we were right about race as a valid test of cherishing America, response. b) Gotten crushed. c) Made the 2nd Amendment's primary reason for existence, restraint on government, moot, impossible to defend. The result would have been the disarming of citizens.

I think George wrong and the 2nd Amendment correct.

Sorry, Gunny, I think the posted meme wrong, even if I passionately endorse what it purports to support: an armed citizenry as restraint on government.

One of my RN colleagues was pure Japanese blood, she had a couple of uncles who were in the Frank "the cripple" Roosevelts prison camps. She said her uncles thought they were safer in the camps because many non-Japanese wanted to kill all Japs if they could catch them.

According to how I understand it the "If Jewish families had a Mauser and the will to use it, Hitler would have been a footnote in history".

Not because any individual family wouldn't get killed but because as Aleksandr I. Solzhenitsyn said

“And how we burned in the camps later, thinking: What would things have been like if every Security operative, when he went out at night to make an arrest, had been uncertain whether he would return alive and had to say good-bye to his family? Or if, during periods of mass arrests, as for example in Leningrad, when they arrested a quarter of the entire city, people had not simply sat there in their lairs, paling with terror at every bang of the downstairs door and at every step on the staircase, but had understood they had nothing left to lose and had boldly set up in the downstairs hall an ambush of half a dozen people with axes, hammers, pokers, or whatever else was at hand?... The Organs would very quickly have suffered a shortage of officers and transport and, notwithstanding all of Stalin's thirst, the cursed machine would have ground to a halt! If...if...We didn't love freedom enough. And even more – we had no awareness of the real situation.... We purely and simply deserved everything that happened afterward.”

Yes, in your meme the Japanese families that might have resisted wouldn't have been in the camps and died resisting but sooner than later the COST of the police action would have stopped the process. Historically given we were at war with Japan and the Japanese population was too small to resist aside from ding in place. So really, they would have been wiped out and folks would have said "good riddance". Ask native American Indians about that.

Coming soon to a town near you, this material will be on that test.

Part of that decision seems to have come from the number of ethnic-Japanese in Hawaii who attempted to help Japanese aircrew shot down during the Pearl Harbor attack to "escape". That bred suspicion far beyond that directed at those of German or Italian descent. I don't remember stories of those needing firearms. As I recall, the German agents with explosives that were delivered by U-boat to German settlement aresa along the US East Coast were promptly turned over to the FBI.

The meme compares pineapples to cabbages.

I think he just loves being the victim . . .

Nope. The meme points out that there are victims, and there are volunteers, and clearly George, exactly like anti-gun Jews - despite the Holocaust - is a lifelong and perennial volunteer.

George should stick to writing humorous reviews for Amazon.

At the very beginning of the war there were numerous I Boats off the coast of California. They sank a couple of dozen ships. For some reason the IJN pulled them back as too expensive to maintain.

As a result the military in California was fearful of Japanese submarines dropping off saboteurs who would blend in with Nisei population still fond of the Emperor.

There's another good one that has a female stating so it's okay to own firearms or something like that.

isn't that "actor" a fag? I know, I'm going to hell or something

Every time I hear Georgie Takei speak about anything I fight the urge to puke. That donut-puncher needs to strap an all-day-sucker in her yap and do what she does best. Amazing the absolute shit we hear from these has-beens as they try to maintain some sort of relevance.