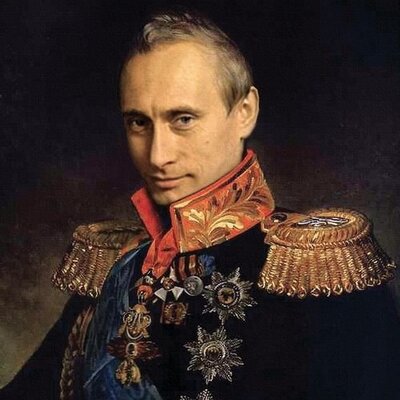 The full spectrum of likely outcomes in Ukraine, based on reality and facts on the ground, not naked fanboyism.

"Outcome No. 6: Russia parades victoriously into Kyiv, having wiped out the Jewish Nazis (oxymoron alert) previously ruining the newest Russian slave state, and Putin is carried bodily on the shoulders of his ardent supporters in a glorious victory parade in Moscow, as Russia assumes its rightful place of power and influence, with all of Western Europe humbled and in thrall before their indomitable might, as the Globohomo rainbow forces of Joooooooooooos and decadent faggotry flee shrieking in anguish, while Vlad reinstates all that is good, right, and manly in world affairs."

Because it's far more likely that flying monkeys will shoot out of yer ass, than that anything approaching that nonsense will ever happen. Both Russia and the West come off the worse for wear in this war in nearly every scenario he outlines; the main difference between the choices he presents is how shitty life is afterwards for Ukrainians. Which isn't surprising, given where the conflict is being waged.

But there's still no such thing as "winning" anywhere in the cards for the Moscow Maniac.

Which is why it's far likelier that Vladpoleon is going to end up the same way his idol did: dead of arsenic poisoning, and relegated to oblivion. After grinding his own forces into semi-helplessness.

Time will tell, so far, a lot of predictions of early Putin failure has been wrong.

Looks like so far the Rumit of the Ukrainian special services seems unproven.

And anything I mention about economics or socialist traitors shutting the USA down will invoke your ICBM and Canned Sunshine defense systems so I shall just wait until the grocery stores and gasoline are Real Trouble (tm).

Self Goals they will kill your nation.

Got real ono-internet trusted friends, got safe water, got lots of canned food and a bolt hole when your hospital and apartment is aflame? Tempus fugit.

Putin has done nothing but fail early, else this would have been over by the end of February, as originally anticipated.

A dozen dead generals and 40-odd dead colonels later, and he's only making progress now at a snail's pace, and winning nothing but acres of asnes and rubble.
The actual question is how long he can prop up the ruble with draconian fiscal controls while his own GDP plummets, and/or if Ukraine falters (or the West lets it die on the vine) first, before this slows to a crawl, or even halt.

Russia doing things to the US will always end in reply via ICBM.

The douchecanoes doing it here to ourselves will end in tumbrel carts and gibbets.

And it's always been a question of when, not if. The smell of fear and panic is strong on all quarters.

I think the Russo-Ukraine War comes down to a few big things:

1. Will Western Europe fully arm and support Ukraine? Example: The Germans have not even begun rebuilding the Marder AFVs they promised Ukraine in February. Ukraine itself says it is short of Artillery and Ammo for it. Will the West supply enough? Will Western Europe continue their support in December and January when their own citizens are literally freezing in the dark from Natural Gas shortages?

2. Will either Army break? Russia keeps "Slamming the Wall" in Donbas by throwing (motley ad hoc units?) troops against prepared Ukrainian positions. (Which is also devastating the very "Russian Lands" Putin cares about.) There are reports of Russian units refusing to fight and demanding removal from Ukraine. There are rumors that units like Ossetians demanded they be released/rotated back home. Hear any reports of Syrian and Libyan fighters lately? Russians are firebombing recruitment centers in Russia. I have not heard anything about Ukrainian troops, but what is their real morale after 4 months of warfare? Does either Army Break?

3. Will either economy break? Aesop points to the Russian economic weaknesses. The West is subsidizing Ukraine with Billions; and likely grifting and grafting billions of it back into US and Western European politician pockets. Will we continue to prop up Ukraine? Will the money we send actually help Ukraine? Will Russia survive the Western sanctions?

4. Will Vlad Go MAD? Will the world have a Nuclear War?

I Don't Know. We may have the answers this time next year. Likely this will still be a war slogging along next June.

Hey, at least we got two new stars on the wall at CIA.

Ponder for a minute their last moments before someone else shot them in the back of the head so that they would not be captured.

You should check out Filthie's blog.
He seems to want to pick a fight with you, but he keeps stepping on his tender parts, and his commenters are even less bright than he is. And that's saying a lot. When basic map-reading is beyond your skill set, ya probably ought not try to talk geopolitics. I can see why you said he doesn't know what he doesn't know. It's been fun to watch today.

One redleg to another, keep dropping steel on the target.

Wild horses couldn't drag me...
The problem isn't what he knows and doesn't know, vast as the latter category is. It's what he knows that just isn't so.

Never mind. They deleted my last reply sometime today. I guess they can't handle it when they get called out on not knowing basic geography.
None of the geniuses there could figure out that Poland and Lithuania have bordered Russia since 1945, at Kaliningrad, so they were shocked to find that out.

It's even in the news today because Lithuania is getting silly.
Maybe they heard that, and had a OMG brain flash.