CW posted this (he was kidding) as the "artists conception of the SR-81".

Some anonymous soopergenius opined that "satellites replaced the SR-71" and "high flyers aren't coming back".

Catch up on anything-but-current-events, from 30 years ago in fact:

(REALITY) The mysterious rumble and bounce has occurred five times since last June, always about 7 a.m. on Thursdays. These were no earthquakes, but a passing aircraft, Caltech seismologists say.

"All I can say is that it's something that's traveling through the atmosphere at several times the speed of sound in a generally northeasterly direction," said Jim Mori, a seismologist with the United States Geological Survey at Caltech.

Analysts from Jane's Defense Weekly, the widely respected London-based military periodical, say that the Thursday morning phenomenon could be a top secret new spy plane, dubbed the Aurora, that can fly up to six times the speed of sound, or about 4000 MPH.

The Air Force denies that any such plane exists.

Jim Mori, Ph.D., anything but dumb, is a SME on earthquakes and seismology. And California is paved with GPS-precise-to-millimeters seismographs wall-to-wall, which made collecting the data easy and meticulously precise. So when a string of "earthquakes" hit SoCal in 1991-1992, always before 7am, always on a Thursday, he plotted the rumbles on the SoCal seismograph network, and did some napkin math.

The minute-by-minute timelines formed an arrow-straight chevron moving at about 70 miles a minute south to north from the Pacific Ocean towards Area 51, and Tonopah AFB beyond that, and based on speed-over-ground, they were moving at 4000+ MPH. Mach 6.

Pre-7am, because this was a project in progress, and on Thursday, unlike Fridays, traffic was lighter, so less people up and about. Project engineers and such tend to be M-F guys. And earthquakes don't punch time clocks.

Ergo, something moving in the air, not in the ground, at Mach 6, and coming in for a landing at one of the two most secured and remote AFBs we have.

Since then, other evidence has piled up: 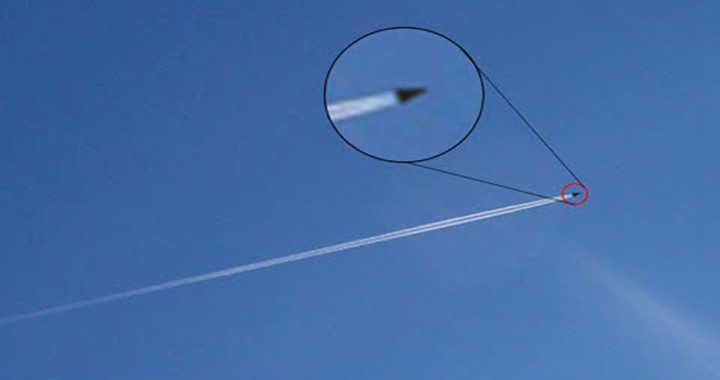 Black delta-wing unidentified aircraft, frequently seen in high-altitude formation with USAF birds like KC-17s and F-15s, etc., over the USA and Europe. Frequently with contrails suggestive of a pulse-jet, and making an unfamiliar and distinctive sound.

I remind all and sundry that it was years between the SR-71s first operational flights for recon after the U-2s vulnerability was exposed to the world in 1960, and the time the USAF actually admitted to owning and flying the -71.

To date, AFAIK, they've still never copped to the existence of the Aurora, let alone revealed nomenclature, official photos, performance specs, or anything like, in 30 years.

But you think they gave up a world-beating recon and intel asset like the SR-71 (it was still setting speed records the day they retired it), in exchange for nothing? Or satellites? Riiiiiiiiiiiiiiiight. Sure they did. NOT.

Now, see if you can figure out why China and Russia have spent the last 30 years busting their scientific asses to develop hypersonic missile tech, at a huge cost in effort and treasure.

Hint: It ain't to shoot down recon satellites, kids.

(Sidenote: If the Air Farce had someone really bright somewhere, their most top secret:codeword-level unit would be a couple of science fantasists, and a small crew of welders and carpenters, and their sole job 24/7/365 would be to create whimsical plywood and sheet metal fake aircraft, especially designs that failed spectacularly, and plant them at a few testing airbases, and leave them out for satellite recon and GoogleEarth to find. I'd also have them take a couple of cutting edge planes and paint false black silhouettes on the undersides, and change the shape using light blue over wingtips and such, maybe a couple of smoke generators on underwing mounts to fake additional engines, just to give amateur airplaneologists something misleading to photograph. For that matter, they'd create fake ICBM silos scattered on military bombing ranges, and leave a few SSBNs fake hulls moored at several Navy docksides too, with full guards and foot traffic. Just saying.)

On a tip from a reader - Morons will be morons: The Great Canadian Dronemaster Windbag gets it wrong again. Space starts at the Kármán Line, where the atmosphere ceases to exist, which is 100km (330,000') up, some 230,000' feet higher than reconnaissance aircraft reportedly fly, i.e. nearly 2½ times higher than anything with wings goes since the X-15 stopped going there. This boundary was established in the 1960s, and recon planes don't fly there, because by definition, no one flies where there's no atmosphere within which aircraft (which cleverly has "air" in the description) control surfaces would work. People who fly to space get astronaut wings. People who fly recon flights have ordinary pilots' wings. And they carry their balls in their helmet bags, because they need something that big to hold them. Stick with being massively ignorant about drones, Gasbag. Being ignorant about everything you touch only takes you from sad to utterly pathetic. But thanks for playing, and enjoy the extra looks.

Bold of you to assume that a group of 'people' who can't figure out how to tell the difference between a man and woman would have the intellectual capacity to implement a fraction of what you're suggesting.

It always amazes me that any secret can be kept when so many parties must be involved. For example, machine shops get an order for some part or dies are to be made to form some unusual shapes from unusual materials. Just as the building of the SR-71 posed problems fabricating with titanium, there are lots of parts to be made for hypersonic aircraft that aren't all done in-house. Remember the SR-71 was started in 1958 or so, so the people were using slide rules and paper and pencil to design that. It will be fascinating to see what the boys have been up to with modern CNC machinery and software.

Last reports of Aurora I found was 96.

I wonder if Clinton shut down the program? Part of the “peace” dividend.

Ben Rich of Lockheed fame (he did the F117) did a book on the Swamp Works. In it, he tried to debunk Aurora, claiming it to be a drone piggy-backed on some other plane.

Maskirovka anyone? Them that know don't say, and them that say don't know.

Since this was designed and built during the Reagan admin, and flown during Bush I, over 30 years ago, at a time when the US military had no problem figuring out which restrooms to use, I'm pretty sure none of your dazzling analysis applies. The calendar is your friend; you should learn to use it.

The Air Force (or the rest of the military for that matter and of course all politics aside) don’t usually retire specialized equipment until a suitable replacement is found that goes bigger, better and faster.
Sky satellites work very well but lack the capability of moving quickly to cover a new world issue. There will always be a need for manned recon.
Just the general rule of thumb.

The deltoid mystery bird has been photographed many times at altitude since the departure of the Clinton Family Crime Syndicate from the picture. The Air Farce is frequently dumb, but they're not absolutely insanely stupid.

Back in the days when Christ was a corporal, I was a cryppie three stories underground. Self important field grade would show up at my window with a sad tale of needing a copy of such and such classified document, usually S or TS. Sorry sir you are not on my copy of that documents distribution list. Well how do I get on that list? You have to be put on the list by the originator. Well who is the originator? Sorry sir that is classified. Underground gnomes do have their ways.

Talked with a KC driver who refueled the SR-71 regularly over the Pacific. The stall speed for the SR-71 was near the max speed for the KC, so they had to get creative with trajectories. I'd imagine they solved that one . . .

One of the uses of the SR-71 was collecting air samples over China following nuclear tests there. No satellite can do that! I'm sure there were many other functions it performed that are classified. Another advantage it has over any satellite is that it doesn't have a known flight path as all satellites still obey the laws of orbital mechanics and aircraft don't.

Off topic, but amusing as heck:
https://taskandpurpose.com/entertainment/war-thunder-player-leaks-chinese-tank-secrets/

I don't know what we might have. But I feel pretty confident that Aurora, or something in that role, is flying.

Yeah; the Blackbird got retired. Then they realized that they still needed it, because satellites don't do everything, and pulled it out of retirement for a few years.

If it's retired, it's because there was a replacement.

Maybe the Air Force Replacement Recon Plane is not flying higher, faster, and with a pilot?

Maybe the "replacement" has been the ever more capable unmanned drones the USAF, CIA, and Navy are flying? Keep Russia and China (also Iran, Pakistan, India, Europe, and all the rest) looking for that high flying, stealthy, phantom, mystery jet?

Both valid points.
The non consistent schedule is a bit one - both our allies and our enemies keep track of when our birds fly over; this has been around long enough Tom Clancy out it in Patriot Games in the 80's and other sources show Saddam knew it then too.

Atmospheric sampling and other esoteric sensors that don't work from satellites or haven't been fielded on them yet need an atmospheric host.