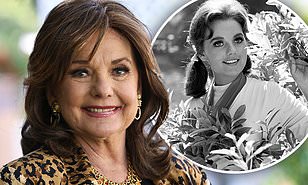 Dawn Wells, famous "Castaway" from iconic Gilligan's Island TV show, at age 82, of complications from COVID. (Those would be pneumonia, and not being able to breathe).

Relax, kids, this ain't a Kung Flu post, except incidentally, but I couldn't pass up the title.

Her passing leaves only Tina Louise (Ginger), aged 86, who hated the show while she was on it (when she found out that it wasn't a show focusing on a movie star stranded on a desert island, since the title apparently wasn't a big enough cluebat for her), and has done everything but change her name and move to Tasmania to avoid any association with it afterwards, as the only surviving cast member of the original series.

Unlike her character, Wells was a former Miss Nevada in the 1960 Miss America beauty pageant. Pretty much exactly like her character, Wells, who never did much of anything else except a slew of guest shots on other shows, was always friendly, gracious, and grateful to fans and the show for what a three-hour tour and a three-year run on network TV did for her. She concentrated on theater roles for most of the rest of her life.

Anyone can die at 82. 80+ is God's Waiting Room. That it was COVID that killed her just puts the proper piece of rotten fruit upon the dung heap of an annus horribilis that has been this one, thankfully ending at the end of today.

By mutual agreement, henceforth this will be The Year Which Shall Not Be Named, or TYWSNBN for short, exactly like Lord Voldemort, and for pretty much the exact same reasons. Dreadfully evil beyond description, backstabbingly treacherous and supremely irritating at every turn and opportunity, and unsuitable to speak of in decent company.

As for the answer to the eternal question of guys of not just a particular age, but of most any age: Mary Ann, guys. First, last, and always.

As to the other question of the ages, I am firmly in the Bailey camp.

Dawn was also a kind and giving person, who invited Natalie Schafer (“Mrs. Howell”) Into her home and and took care of her in the later years of her life.

Best thing Incan say about Tina Loiuse is that she was in the cast of one of my favorite low-budget werewolf films: Late Phases (2014).

yep,Mary Ann; that's never really been in doubt... as for Tina Louise; she shouldn't 'hate' the only recognized work she's ever done. I remember years ago, she did an interview on morning drive time radio with Mark and Brian on KLOS... she was hawking her 'product'. An umbrella; the hosts kept calling it. Tina kept insisting it was 'a parasol'. Whatever. Her brain was in her bra, and left plenty of room.

I wonder if her thinking the show was about the movie star was just her cover story because all the guys preferred Mary-Ann. Happy safe New Year

Aesop, I would agree with TYWSNBN. However, if next year turns out to be the same or worst (I am kind of thinking it will) we are going to have an acronym crisis.

I've always had a crush on Mary Ann. She shall be sorely missed

I sent brother and buddies a text. "Sad day, the answer to the greatest question ever asked has died". Unfortunately it was my brother who said "What's the question?" So I asked it.

Yes the second Alpha and Omega.

Mary Ann was not only easy on the eye, and realistic enough to create an archetype to pursue, ahe actually was useful and low maintenance.
Dawn Wells was able to secure some royalties from the show and kept drawing an income. She was also involved in several charitable endeavors over the years. The only negative I've ever heard was a a possible DWI about a decade ago.
I have always been on Team Mary Ann, and Team Bailey when that one came up. Looks are less than useful, and usually camouflage a useless inner core.
Rant off,