In what's become a more or less annual tradition here*, we present to you this year's Q.A.W. Lecture. If you haven't read earlier ones, we heartily encourage it.

The earlier ones are located  here and here.

You should read them, firstly, because they're that good. No, really.

Secondly, because they were spot-on then, and they remain so now.

So, without further ruffles or flourishes, we present this year's offering:

Ladies and Gentlemen, faculty, students, and friends of Huxley College,

We warned you. We told you things would go from bad to worse.

Some particularly bright students of history could only see this coming from about a decade away. A few of them are already dead, and happily so for them. Because they won't have to live through what you may not live through either.

War, Death, and Hell are well and truly coming to this land.

Maybe in days. Maybe farther down the road. But come they will.

Nothing's carved in stone, but that this people will not sit still and allow usurpers and frauds a free hand to tear down the land our forefathers built. Those whom a certain witch named "Deplorables" took that heritage as a badge of honor, and they're about to show TPTB what happens when Deplorable becomes Ungovernable. 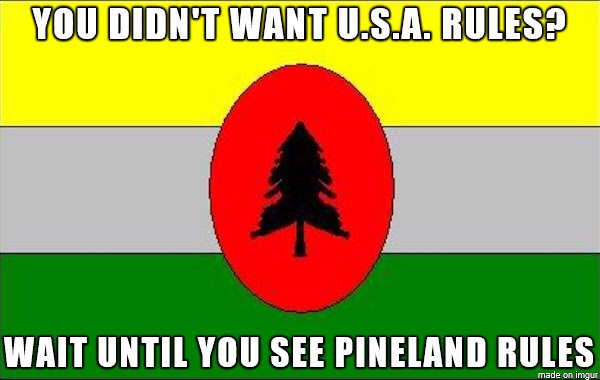 Some people are wondering about how much those charged with enforcing law and protecting the nation will go along with the New Bosses. Be in no confusion: Winners write the laws and enforce them, and then edit and summarize the history. So knowing that, Don't lose.

Short answer on who will do what: some will, and some won't. And by the time you find out which is which, it'll probably already be too late for one of you.

The LEO enthusiasm for "just following orders" for a notable number will be no less than it was for any reichspolizei in the fatherland from 1933-1945, but their early enthusiasm may diminish somewhat markedly when their chances of returning home safe and warm each night starts to become merely a fond wish, and they are felled with all the impersonality of random fiat.

As the guys on the little end of the government's pointed stick, they're going to feel the brunt of both giving and receiving firsthand. After the first few get facefuls of backlash from  community policing from those less than cheerfully obedient to the distant diktats of our would-be overlords, and with no similar downward pressure from the top limiting their life expectancy, enforcement will quickly devolve to a series of Monday-morning "Gotcha!" moves against the unlucky and the unwary, after the shooting stops, while beat cops turn into 2M Sgt. Schulzes 24/7/365. 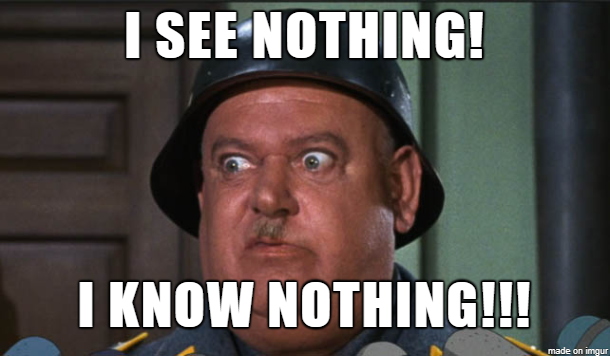 The clever ones will start to monkeywrench the system from within, while keeping their official place firmly in place during duty hours. 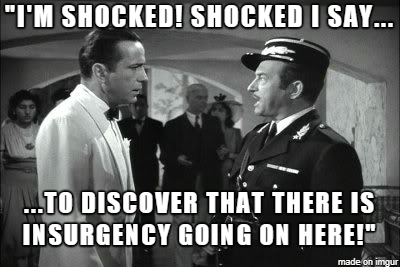 "Round up the usual Suspects!" is ever the wise Vichy Way of doing business in such times.

What happens from the streets won't be vigilantism, either. It will be street justice in a dirty war, until Leviathan collapses from the Death Of A Thousand Cuts. Some folks think the population isn't built for that, but they're about to find out firsthand how poorly the organs of government aren't built for it either.

How do you tax someone when there's no mail delivery, in either direction? When the internet is perennially down? How do you patrol the streets when your police cars spontaneously combust? When the lesser minions of bureaucracy go out, and never come back? And worse.

We don't have, and never will, the legions of convoy escort troops and heavy MRAPs they're going to need when merely having government license plates is a death sentence. And the minions of bureaucracy are going to find out about a week after that starts that where they live it isn't anything like as secure as the Green Zone was in Baghdad, ever, nor ever could be. The sick call-outs a minute after that epiphany will be biblical, and permanent. The alternative will be finding their own heads on pikes in their front yards in 3, 2, ...

Government here has spent 240 years ensconced in a cocoon of their utter inarguable invincibility, because they've never had to operate in enemy territory for so much as five minutes, since the British burned D.C. in 1814.

The American people, conversely, have been operating in occupied enemy territory non-stop since at least 1912, if not far longer, and their ingenuity and perseverance in the enterprise knows no bounds.

My money is on hangings and guillotines for the guilty before this ends, rather than camps, and collateral damage will be overwhelmingly in one direction. Anything contrary will merely hasten the fall of the illegitimate regime. A fate devoutly to be wished.

Those of you there, or near there, from rubbing shoulders with The Machine: How are they going to cope when the murder rate skyrockets, and the entire population is potentially The Enemy? How did that work in Vietnam? Haiti? Somalia? Iraq? Afghanistan?

I'm betting they hand us TPTB's heads on platters by way of apology, and with dispatch, rather than face the music that their side has cued up on the jukebox.

Picture Saddam's Iraq regime, doing what they do.

But this time, trying it in Texas. Times 50.

They're going to flee the seats of power like scalded baboons, and rue the day they ever sought to gain them by fraud.

At least, the survivors will.

How many of those we allow will depend to a large degree on how much of a sense of humor the average American maintains, when this is all over.

Their side is in full-court press gloatation mode. Challenge accepted, @$$wipes.

That's usually the point in civilization where you get 75M people that act like Col. Tibbets and General Lemay, IMHO, in terms of dogged determination, and the finality of ending the argument. 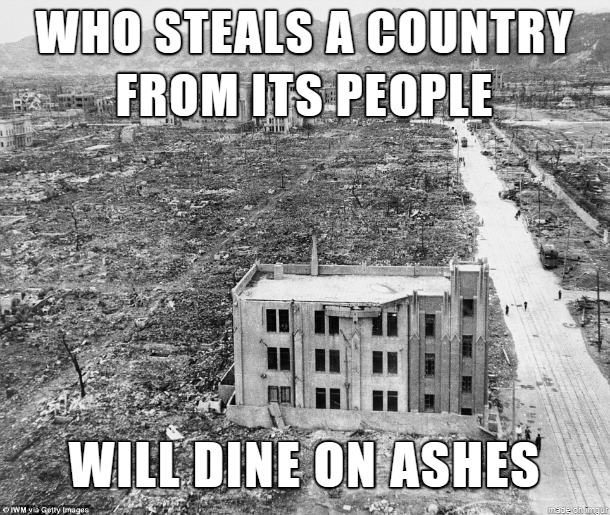 Whether that happens or not, we're about to get the government we deserve, good and hard.

Make yourself ready, and do your part.

*(How Curious: The last lecture was on the last day of 2019. This one is on the first day of 2021. No lecture at all during TYWSNBN. Fate is serendipitous like that.)

Labels: Class is in session

In your opinion, is refusing to pay taxes this spring (in the case of the Biden junta being in charge) an advisable action, or not? I think on principle, it's the right thing to do, but I'm more interested in whether it would be of practical value.

IMHO, refusing to pay taxes makes you the nail standing up, that's going to get hammered down.

And while I do not advocate anything that would be considered domestic terrorism and other federal felonies (particularly on my own blog), imagine instead what would happen if someone set events in motion that would make an entire town, city, or region not pay taxes, e.g. by crashing the internet, or disrupting the USPS.

Now imagine a seriously motivated individual who did it the other way around, and crashed power, the internet, and/or mail delivery, at the IRS regional collection/processing center end of the equation, on April 15th. Suppose "someone" started leaving flyers on bureaucrats cars saying "It might be better for your kids if you called in sick tomorrow."

Folks wondering what to do should learn to work the CARVER matrix like their personal rosary, abacus, and Magic 8-Ball, when deciding, "Do I do'd it, or do I not?"

Bear in mind that on that evaluation tool, a 30 is a perfect score.
Much like the NFL draft, or dating at the Miss Universe pageant, one does not go after a 29-pointer if there's a 30 still on the table. And so on.

I believe I read 14 million without jobs now. The cities and states are broke and getting broker, ha ha broker. Those are taxes not getting paid. I imagine retail this year way down but the press will spin it, but that means sales taxes are down so cities getting broker ha ha broker. For nine months 750,000 up to a million a week in the early days filing first time unemployment claims. Don't see that improving with the job losses that creates to make matters worse. If cops don't get paid I doubt they work. Man power will be reduced, probably why the bogus story about defund the police. They already are being defunded just don't want you to know why or how. They are broke. Everything effects everything in the same direction just as it did in 2008 thru march 2009. Build your treasure in Heaven.

Don't know why, but I enjoy the return of your black pill rants...

Thank you Aesop for linking the earlier Wagstaff Lectures. I never read the first one but I commented on the 2019.

As crude as it is BFYTW is the answer to a boot stomping your face. If the Chinese "Won" by buying our leadership AND the Deep State actors that who's JOB was to protect us from such affairs then make the Chinese regret that purchase.

In the end we all die but as Braveheart said "All men die, NOT all Men truly Live".

Live long and make your price high. As I posted in 2019 don't attack the Spear Head, attack the shaft and the head is useless.

A Battery powered Sawzall is an AMAZING tool, just saying. If you need more instruction that that good luck.

Thwarting thieves is always advisable.
1) It makes you better off.
2) It makes the thief less so.
Never forget, the thief carries the biggest stick, but you have the brightest mind.

Whats really sad, I was channel surfing yesterday afternoon late and on CSPAN channels they had the swearing in ceremony for the 117th senate. Never seen it before. There was Pence and each senator individually. The first line of the vow "Do you swear to defend the constitution from all enemies foreign and domestic". It was disgusting and repulsive to me.

For 15 years, there have been parts of the country where the use of government plates is "inadvisable". Numerous federal agencies have state plates on some or many of their vehicles, and we can presume that number will only go up if unrest starts. But I'm sure there are other ways to find government employees...

This reminds me of Peter Grant's recent post on how easily 'modern' civilization is disrupted.