Saturday Forecast: Scattered Nothingburgers, With A Chance Of Butthurt 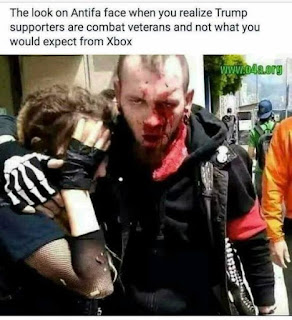 I have serious doubts anything tomorrow will amount to much (not for lack of wishing amongst the Snowflake Brigade). And while a giant bloodletting purge of Leftards is the last thing I want to see happen, it is still on The List.

Antifa, to date, shows little sign of being able to orchestrate a piss-up in a brewery, and with a modicum of official interest, they're about as ferocious as the average housecat.

But if they exceed expectations, and perform beyond their usual range of competency, the household artillery will be cleaned, the moat filled, and the caissons of resupply stocked to the top of the boxes.

After all, you wouldn't want to miss out on bagging the limit on opening day because you'd forgotten to bring along enough ammunition, right?

Still hilarious every time I see it. Point of order, referring to the snowflakes as "ferocious as the average housecat" is unfair to housecats. I had a cat who weighed all of six pounds, had the nicest disposition you'd ever want to be around, loved nothing more than a warm lap. But piss her off (like try to get her in the carrier for a trip to the vet, trim her claws, or God forbid give her a PILL) and you'd find that sometime in the last half-second she'd grown 1,073 more claws and 458 more teeth and they were ALL in some delicate flesh.

Although I DO love the GIF of Ms. Dreadlocks getting her teeth rearrange though....

I wouldn't mind seeing a few come waltzing, or is it prancing with them, but the closest libtard city is Madison and there's 10,000 dairy farmers in the way. Not a chance they'd get through that crowd.

Our friends and neighbors in antifa (yeah, I know. I'm trying to be nice) are reason number 74203 of 10 900 of why I live in a rural town. I hope that they all settle down with a nice cup of hot chocolate, sing a few verses of "Kumbaya", and then go home. On the other hand, schmucks like that is one of the many reasons I carry a medic bag, among other things, in my vehicle. As does the Darling Wife.