Never mind that one of the most secure locations in the free world, with all of its members assembled, was was supposedly breached by unarmed polite groups of middle-aged people.

Never mind that the Capitol Police are the ones who themselves opened the barricades and doors.

Never mind that they shot an unarmed woman with 14 years in the USAF and killed her.

Never mind that the hooligans who made it to the House Chamber have been identified as BLM and Antifa protesters from previous demonstrations, in about 30 seconds.

Never mind that there was no QRF in place closer than Virginia, despite the obvious knowledge that this was coming, for two weeks.

We're supposed to believe it all "just happened" because those darned "right wing mobs" got out of control.

Media already has a narrative, and Twatter and @$$book have deplatformed m*****f***ing POTUS, because reasons.

Fraudlent-Elect Gropey Joe stumbled out of his coma long enough to declare that the people having a say in things is "the greatest threat to our democracy ever". Which is too many lies in one sentence to bother fisking, (starting with the fact that the United States has never been a democracy, and never will be, nor was ever intended to be). But if His Fraudulency wants to start talking about "one man, one vote", we've got about 200,000 bones to pick with him in Georgia alone.

Which failed state stopped counting last night, then resumed as soon as they had added enough ballots to safely claim victory in the runoff, after running off Republican poll watchers, AGAIN, and with everyone watching them do it. The media has issued a tape recording of crickets chirping, despite the Atlanta polling tabulation employees standing over the dead body of democracy in Georgia with smoking pistols in their hands.

No, really, I totally believe that the white Christian racists the media assures us infest Georgia unhesitatingly elected a communist black radical and a Jew to represent them in the senate, like they always have before.

People are getting eviction and power shutoff notices in the deep of winter, and we're sending billions to every country but our own, but there's no reason to be upset with the Congress.

Pull the other one, it's got bells on it.

Leviathan has made it abundantly clear, they're not listening, they don't have to, and they don't give a damn who sees, nor who cares.

The only answer to that isn't going to be pleasant or easy.

But it will be absolutely justified, utterly necessary, and fearfully overdue.

The phrase that pays ends with "...and let God sort them out." 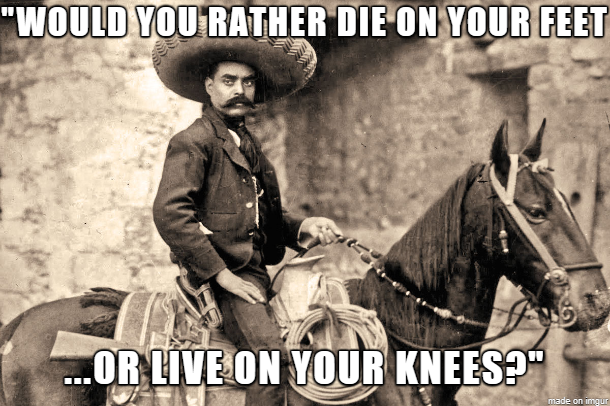 Labels: By Any Memes Necessary, Spicy Time, Stop The Steal

It's better in the original Latin:

But it will be absolutely justified, utterly necessary, and fearfully overdue.

This bears repeating again and again. I am one cynical, jaded asshole that sees the worst in everyone, everytime. And I am truly shocked by what I have seen today watching the congressional circus monkeys perform today.

I truly thought we had more time. Guess not.

"Never mind that the hooligans who made it to the House Chamber have been identified as BLM and Antifa protesters from previous demonstrations, in about 30 seconds."

So, once again - indeed, as always - the Right gets caught flat-footed and utterly out maneuvered by a small group of commies who [*gasp*] don't follow the rules, and are supported, at least tacitly, in doing so by the government [*gasp again*], who will shortly be using the "Right wing lawlessness" to come down hard on people.

Yeah, that bodes *real* well for the potential success of any fight against the Left. At the very least, the learning curve is going to be positively brutal. Like US Navy in Ironbottom Sound and along the Eastern Seaboard in 1942 kind of brutal.

I was considering moving to Venezuela but now I need not leave my home in Georgia.

I do not fear my future but that of my kids and grandkids. I only have concern. We all have to meet our maker someday.

"Imagine being so cowardly and devoid of soul that you attribute the courage and virtue of your countrymen to your enemy."

"But it will be absolutely justified, utterly necessary, and fearfully overdue."

It's going to happen because it must. We are about to enter the peak crisis phase of the fourth turning. For generations, we've taken a pass on educating our children with western civilization, and American government. We've instead elevated all sorts if silliness to where the up and coming generation not only doesn't know how the machine works, they think it's evil and raciss. They are about to find out otherwise. They are about to learn the lessons our grandfathers and great grandfathers had to learn through pain.

I read a follow up with either Strass or Howe were they discussed four likely solutions. For the life of me I can't find the damn thing now. The first was that people all came together and worked it out civilly (like a convention of states). The last was total world war. (we are interconnected). Inbetween were two other predictions, one of which was the US splitting up in some way.

One way or another we're heading into the shit, because it's happened every 80-100 years like clockwork. Knowing that doesn't make it better. Like knowing your dad with terminal cancer will die - it's still sad when it happens.

Trump commits to peaceful transition after Biden wins. So there you go. All that bluster, all the tough talk. All bullshit. Leaves 80 million swinging in the breeze. These fucking cunts are calling US insurrectionists because of a couple broken windows. Nearly the entirety of Congress has now labeled this the most destructive act since Pearl Harbor. Democracy will not be defeated by the rowdy mobs of trolls led by Troll king Trump. How dare they violate the sacred grounds of the "People's" house. All fucking bullshit. They should have drug those weasels out and hung them by their innards. But they didn't. Didn't riot, loot, burn anything down, shoot any cops, blow anything up. Nothing. Just yelled. Just waved flags. Sang songs. Watched a young Air Force vet, a woman and mother get executed by some coward because she thought she should stand up for her country, for her oath. So now what "patriots"? You think you just pack it up and try again in four years? Ha ha, jokes on you, this was the last time you had a shot, there will be no next time.

It's time to seperate the wheat from the chaff people. We will see it soon enough but we can't be dismayed at how few grains are left in the basket. It'll just have to do.

My wish is to die honorably and free...in a pile of brass if necessary.

Watched a young Air Force vet, a woman and mother get executed by some coward because she thought she should stand up for her country, for her oath.

Four tours of duty and she died drowning in her own blood on the floor in the nations capital that she Honorably served. Words escape me. Spit