If It Bleeds, We Can Kill It 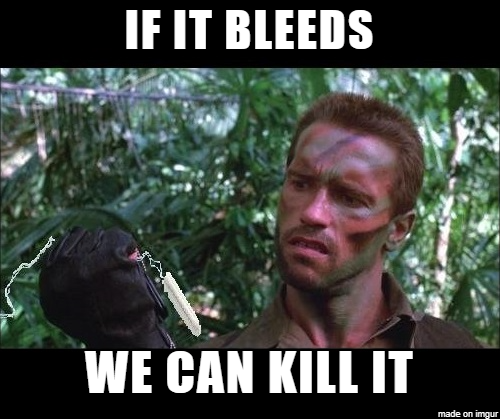 In the last couple of days, both WRSA, and Peter at Bayou Renaissance Man have made reference to a prescient article from the dormant blog (formerly on our daily reads bloglist) of The Lizard Farmer. When the internet starts to echo, you should probably pay attention and take a peek.

Britistan built the very model of the Orwellian police state, and fewer than 500 hardcore mainline PIRA Provos ran them ragged for three decades, despite every modern advantage.

And once the other side starts getting kneecapped, and their cars start exploding, it's not nearly as fun for them to play "tag".

$5 worth of art store supplies and about 20 minutes can make you a license plate that will fool a reader. Random people doing random acts unto others leave no network to trace, no emails to decipher, and no accomplices to identify.

You can also leverage that, and Cloward-Piven the intel apparatus, by choking it with so much noise they can't suss out a signal in any useful time frame.

Send 20 meaningless messages to people you have no connection to, for every real one you send.

Encrypt revolutionary rhetoric, and send it to opposition groups. CC a couple of prominent rabble-rousers of the BLM/Antifa stripe. Attend a few of their get-togethers. Send in ginned up documents, and let TPTB chase your enemies, and their own tail, for your own amusement.

It goes without saying that if there was an amateurish device that failed to explode, and the Feebs or BATFE found matching components in the trunk or behind the shed of the local anarchist poobah, they'd jump to all the right conclusions, and it would take months to sort out, if it ever happened.

Their TTPs and methods are a predictable weapon that can be leveraged to derail the entire Leviathan, if one has but the inclination and wit to make it so.

And even if they know you're doing it, they can't and dare not turn it off.

Think of Paul Newman in Absence Of Malice, crossed with a little bit of Rambo and John Wick.

The option to vote your way out of this is a train that left the station long since. In the words of von Clausewitz, it's nearing the time to continue politics by other means.

The other side made the choice that the law doesn't matter, and that they would operate outside of it. Give them the fruit of that tree, good and hard. All that happens if they dare to crack down is that they radicalize a hundred Norm the Normies, and make blood enemies of them for life.

Let an illegitimate regime see what happens when you bypass the consent of the governed, and society responds by withdrawing that consent in every possible way.

In physiology, we call this an immune response.

Let the unwanted invaders know they aren't welcome, and do everything to rid the host of their invasion. If you wait until they're knocking on your door, you've waited too long, and if you're fighting fair, you ain't been paying proper attention. This needs to be a fight between hunters with clubs, and baby Harp seals. Marquess of Queensbury Rules were revoked November 3rd, and won't be coming back anytime soon.

Making it not worth the juice to squeeze the lemon is a help, and in the meantime, you whittle down their numbers of supporters and minions every chance you get.

The US has lost three wars of attrition in the last half-century. Bringing those lessons home to roost stateside would seem to me to be a no-brainer of a strategy.

The Deep State and the incoming illegitimate regime have gone out of their way the past year to make ordinary Americans the enemy. So be it. The Golden Rule of Combat is that "The Enemy Gets A Vote."

Labels: By Any Memes Necessary

If you seek to emulate the IRA and the other groups take care that you do not also copy their attitude towards collateral damage and innocent civilians.

Emulate? Certainly not.
They were terrorists. No, really, no sarcasm there.

The greater point is that when even obvious communist-controlled and -supported terrorists can hide in plain sight for 30 years, how much more so Joe Average, with no such handicaps?

I give TPTB puny odds of escaping the punishment due them, in due course.
The retribution will be biblical, and people will talk about it for hundreds of years.

@ BadFrog: Actually, the IRA (well, the Provisionals, at least, Real IRA and Continuity IRA were very different) changed their attitude towards civilian casualties pretty markedly over the course of the Troubles. They figured out that causing lots of casualties among non-combatants garnered bad press and moved away from it far more so than most groups, and that it hurt Britain more to cause economic disruption via things like the Docklands bombing than to just rack up body counts. To that end, they'd call in warnings about bombs, etc. The warnings also had the advantage of guaranteeing more press coverage.

A few months back, Matt Bracken recommended an excellent book by Martin Dillon called 'The Dirty War'. It's an excellent account of The Troubles for anyone interested.

As for the IRA's attitude towards collateral damage, I'd say that claim is somewhat exaggerated, since the IRA was well known to plant bombs, then call in the bomb threat in order to give police and security people time to evacuate the area. In fact, the IRA would actually give the British authorities code words in order to assure them that it was a legitimate bomb threat and not a hoax.

However, regardless of one's individual attitude, or the attitude of a group towards collateral damage, the trouble with conflicts in one's own backyard is ostensibly that IEDs and incoming fire generally don't discriminate when it comes to targets.

“ It goes without saying that if there was an amateurish device that failed to explode, and the Feebs or BATFE found matching components in the trunk or behind the shed of the local anarchist poobah, they'd jump to all the right conclusions, and it would take months to sort out, if it ever happened.”
—————
Ditto for empty shell casings (picked up at a range known to be frequented by LEOs) left in the back yard of some similar individual. Wiped clean of prints. Phoned in on a burner phone that is tossed in the garbage, wiped of prints, at least 10 miles from your home.

A simple question to all of you - how many of you actually lived there during the Troubles? Having grown up there I believe I may have first-hand experience that you may not.

The attitude towards collateral damage is not exaggerated at all. The IRA (of whatever flavour) were well known for using false calls to lure in the security forces or direct people towards the actual bombs.

They also developed the technique of using innocent people to position bombs through holding their families hostage. They even descended to the level of chaining the drivers to the vehicle.

Finally, I will refer you to my first post and Nietzsche quote on the abyss.

And yet again, I remind one and all, I said "study The Troubles", not "be the bloody PIRA". One of these things is not like the other.

That this needs repeating is a slam on educational standards.

If you study the Underground in Nazi occupied countries during WWII (and to a lesser extent, Soviet occupied ones as well), some quite stunning acts were undertaken by 1 person, or a small group of friends. They often didn't involve killing people; look back at Peter's article of a few weeks ago and see how easily modern society can be slowed down by a few small acts of "interference"...
This applies in particular to cities - they lack redundancy in everything from traffic to water to package deliveries. If at all possible, stay out of cities. Not only will problems like this escalate, so will crime as police and LEO resources are diverted or laid off/ quit/ fired/ etc.