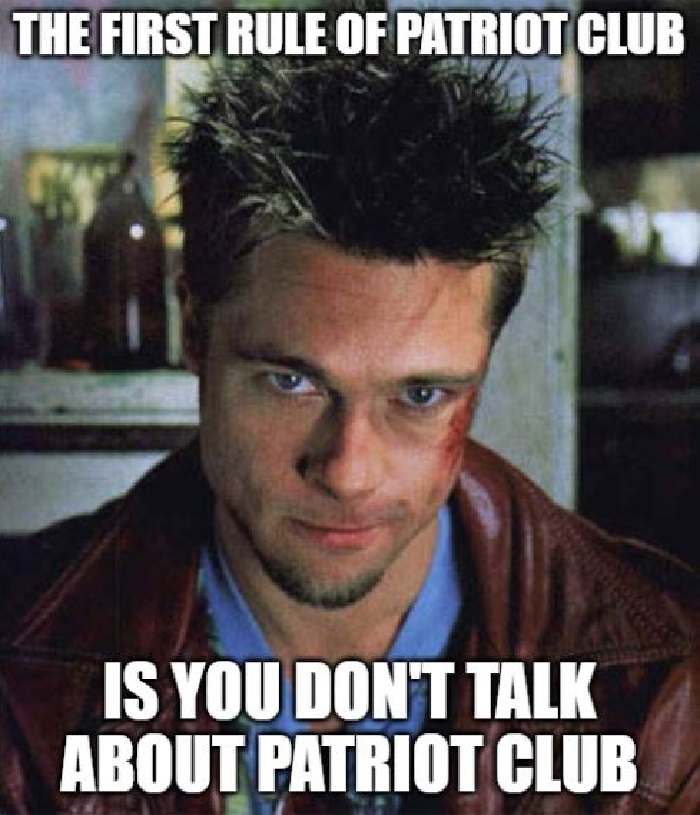 [Notice: Sincere but amused condolences to anyone who came here because they mistakenly thought WRSA was telling me to shut up. LOL!]
"Three can keep a secret, if two are dead." - Benjamin Franklin

To the waste of skin and oxygen who attempted to suggest in comments elsewhere, "You first, agent provacateur", I point it out for the fund of bankrupt intelligence among similar limpdicks that when - not if - people anywhere do things in response to this week's banana republican travesty, they should keep those secrets as far as possible, including if necessary taking them to their graves. No brags, no reports, no after-actions, nothing. If we get a republic back someday, maybe, in 50 years, it can be discussed. It will not and ought not be blogged, except by those with single digit IQs, and life expectancies measured in minutes.

Unless you want to see a federal prison from the inside, you'll follow the laws scrupulously, and you're Johhny StraightArrow, as far as everyone in your effing life knows, or that anyone, anywhere, can ever prove.

Your feelings, even your words, are not deeds.

What's coming will be UFOs.

"Something happened, but nobody knows anything about it."

Every law enforcement officer worth their salt can tell you two things:

2) "Talking to the police is felony stupid."

Those who talk, don't know; those who know, don't talk.

And don't forget to keep your ingredients separate. Hard to prove that those innocuous household chemicals are anything else if only half the recipe is there and the other half and/or catalyzing agent is elsewhere.
A friend got sideways with the ATF years ago because he talked about an experiment in firearm silencing.
Oil filter = legal
Threaded adapter = legal
Combined = legal
Placed on the end of the barrel = HIGHLY ILLEGAL.
He and everybody in his circle learned a valuable lesson in OPSEC.

All you veterans know it; the term is OPSEC, starting right now.

Yep we are all East Germans now.
Stay safe my friend.

OPSEC should have began the day you realized what was going on. Years ago. The day you picked up a cell phone, the day you first went on the innerwebs, the day you sent an email, the day you joined any type of social media group. that is when it began. Not today,not last week and not November 4, 2020.
Thank you for providing a platform and reminding people. There are people who don't need reminding because they already live it.
If anything, technology should be used to baffle and distract, sleight of hand as in the ways of a magician.

Good advice. Every phone is a bug.

Actually, an oil filter on the end of a barrel is still not illegal until you punch a hole through the other end with the instrument of your choice.

Highly Recommended Reading, with lessons for tomorrow....
"Jack Hinson's One Man War"
A Civil War Sniper Hell Bent on Revenge
[Get the actual book on the used market, or just read the synopsis below if you can't.]

Just keep your mask on and everything will be fine!

I am having a hard time with this. I have lived my whole life as an open book. I ain't hidin from nobody, nobody hidin from me kinda thing.

I am in a job that allows me to think what I want and say what I think for the most part. Skills matter more than most anything.

I live smack dab in the middle of a solidly liberal city of 50,000 odd thousand people. 6000 went for Trump, 30 something thousand for joe and the ho. I assume at some point I will be harassed by the city for speaking my mind. Bring it.

Wife is worried a bit, but agrees with me. We will not be silent.

That's literally where my brain went with the WRSA post title. Sorry, it's late lol.

And yet, here you are, still on an Amazon owned property.

Yup. Communicating for free in the clear to the widest possible audience.
Which is pretty much 100% of the point.
And yet, still not talking about anything best covered by OPSEC.
Anyone discussing anything practical/tactical/actual online is a "No Go" at the reading comprehension station.
That's not what's going on here.

And BTW, Blogger is wholly owned by Google, not Amazon.

YT Description: "I'm the Internet Privacy Guy. I'm a public interest hacker and technologist. I use my extensive knowledge of cybersecurity and tech to serve the public good. I care about privacy. I warn you of digital manipulation, disinformation, mass surveillance.

I'm a successful software architect and have built many enterprise systems. I also have an open-source social media app Brax.Me " --

I've learned useful things I'm implementing. Check him out and decide as to the level of trust you think he deserves. Came to the US as a kid from China, lives in Cali, seems..... to be fully against all censorship.
https://www.youtube.com/c/BraxMe/videos?view=0&sort=dd&flow=grid