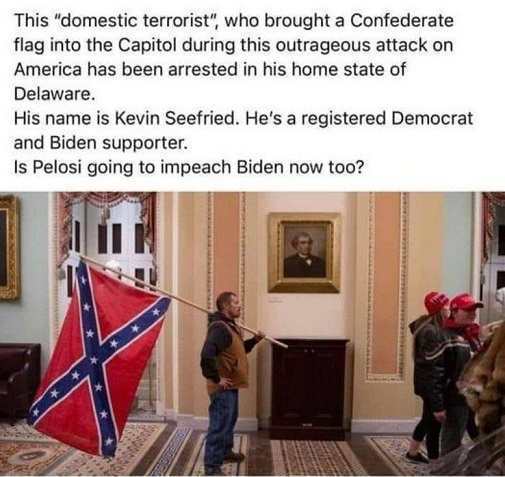 In the Pictorial Dictionary Of The Universe, next to the phrase "false flag", we find this picture. 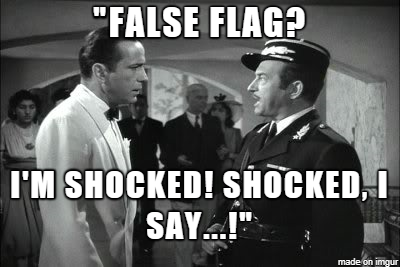 Closest that schmuck ever got to the Confederacy was probably fapping to a poster of Catherine Bach in middle school, when Dukes Of Hazzard was in rerun glory on cable. 10:1 his flag still has fold wrinkles from the package he cracked open that morning, before heading over to his assigned agent provacateur operation.

Methinks some overzealous FeebIdiot who ID'ed the above-named assclown, undermining the gaslighting narrative of half of Congress and all of the MSM, is therefore going to get himself re-assigned to investigating federal trespassing complaints in the Arctic National Wildlife Refuge, in 3, 2,...

Point of order: Calling the buffalo jump panty raid on the capitol an "outrageous attack on America" is recockulous. It was a staged photo op, as demonstrated, orchestrated exactly like the Reichstag Fire to give political cover to the exact draconian totalitarianism advocated for the last 4 years. That happy horseshit, and the progenitors of same, should have people going back, in greater numbers, this time with machetes and torches, and doing the job right, once and for all time. They haven't got enough bullets in Fedgov to shoot everyone who'd show up if that was the actual stated agenda, and putting several hundred severed heads on the spikes of the surrounding fenceline might be a salutary example for subsequent generations of local thieves sent to headquarters and allowed to enter the halls of Congress, if only we'd do that. I'd go whole hog, and re-make the Speaker's podium and the Senate dais out of the bleached skulls afterwards, as an everyday reminder to those douchebag swamp denizens about who works for whom in perpetuity, but I'm maudlin and sentimental like that.

Then again, I was sorely disappointed in the Almighty's justicial timeliness when, at the utterance of "solemnly swear to preserve, protect, and defend the Constitution of the United States", a couple of recent utterers didn't spontaneously combust on live national television, just to balance the cosmic scales on the spot.

I'm therefore forced to conclude that He must intend others to light the bundles of kindling, in His good time.

Labels: Burn The mother Down, QED

I got the long stem lighter...

Yep. The violent false flags that have been quiet the last 4 years will come hurtling back as each new piece of draconian legislation awaits a pretext for passage.

The event in the District of Columbia which took place on the sixth day of the first month of AD 2021 is/was a 'RINO'. No, not like Romney and such.

Riot
In
Narrative
Only

Here is a better view of said flag, with packaging folds clearly visible

I'd sure like to have that flag if he isn't using it anymore. That flag is hard to find anymore... and I need a new one.

"Here is a better view of said flag, with packaging folds clearly visible"

A damn fine call. Just got done checking the voter regs myself, since my default position is that anything I read on the internet is a lie and it's my job to at least get in the same zip code as the truth.

It seems the myriad outlets that ran the story couldn't arse themselves to look up his voter reg, which has been active since 2003. If he were registered with the Reps, it would have been in the headline. A few of those outlets even ran the info from FBI interviews where he said he flew that flag regularly outside his home. I would say that this is all unbelievable, but it's par for the course.

One person was killed. NOT 5.

I've tried looking up his voter registration myself. But can't find the necessary info.

There is a guy with the same name, age early 30's who is indeed a registered Democrat. But this guy is 54. More information needed.

Somewhere I remember seeing a cellphone video of two agit prop workers trying to get a "riot going" in the back of the Capital which effort went nowhere. Cant remember where I saw it. As well video monitored as that building must be, the agit props should already be exposed. Will not ever see light of day. Proper clean up probably has already Epstiened them.