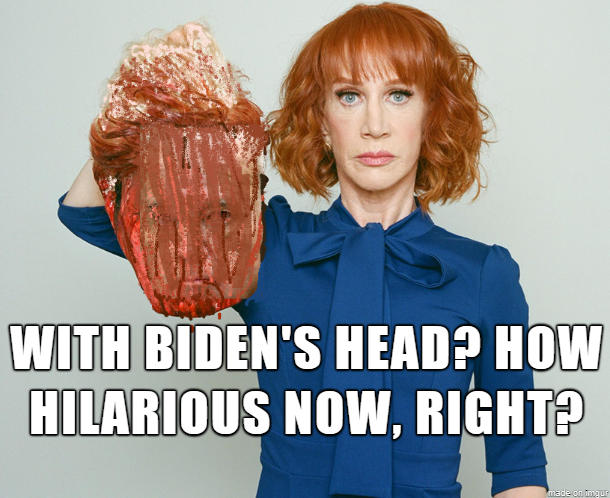 I mean, seriously, since the Lunatic Left has such a celebrated sense of humor, putting Gropey's bloody decapitated head there this time ought to be just as uproariously funny as it was in 2017, or even as funny as when she retweeted the original after the November election fraud was completed, right?

Not that we'd ever do that act, nor even threaten it, because those are illegal, and the Secret Service famously doesn't have nearly the sense of humor about actual threats that people like Kathy Griffin evidently do. But this is just free speech and great good fun. Amirite?

I offer $10 cash money to the first mainstream media outlet that does this meme better, and publishes it, just to show that turnabout is fair play, and no hard feelings. Unity, and all that.

Contact me for that prize at #whenhellfreezesover, you hypocritical anti-America bastards.

Labels: BFYTW, I meme to misbehave

This is unity that I can get behind!

Make it more Bidenesque. He doesn't have that much hair. Hold him by the ears.