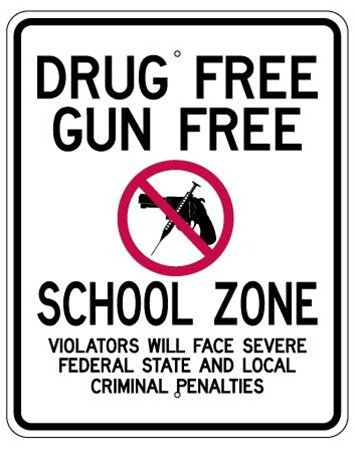 I'm not going to link to the 12,000 articles and breaking news headlines.
School? Check.
Deranged sociopath? Check.
Registered Democrat? Check. (But I repeat myself.)
Troubled history, known to be a hazard to life and limb? Check?
Looking to be famous by shooting his way onto the news? Check.
Repaid in spades by the orgiastic news coverage nationwide? Check.
Bad guy with gun stopped by good guy(s) with gun? Check.
Leftards dancing in the still-warm blood of the victims, and carping about getting the gun control they've tried and failed at a dozen or a hundred times? Check.
You can fill the rest in yourself in a day or two. Or take a shot now, and be 90% right without even looking.

We don't have a gun problem in this country.
We have a criminal problem, a psych patient problem, a dumbass media problem, and a problem with the Special Snowflakes afraid to admit that guns are a useful tool, sometimes life-and-death useful. Notably, in every case that one of these gun-toting wannabe celebutards shows up, what makes them stop RFN is when someone armed starts delivering return fire. Pity the dead football coach/security guard hero couldn't do that, instead of just donating his body as a handy bullet sponge, but that's what the hoplophobic educational Leftards want to happen.

Evidently it was better that he follow the rules every day, and die, rather than break them every day and carry concealed anyways, and risk losing his job, saving countless lives, and living to tell the tale afterwards. This is the calculus of moral cowardice and stupidity, in a Darwin Award-winning fashion.

Show of hands: who thinks it's better that the coach is dead, and the shooter will live for 70 years in state prison, instead of the other way around?

But as long as the one place anyone bent on psychopathic homicide can count on being just about the only one around with a gun is schools, schools will be were most of the shootings are. About two times a week in the past three years. And for the media pathological liars, this is the second mass shooting this year, not the 18th. Media douchebag fabulism strikes early, every time this happens. They can't help themselves, yet another form of sociopathy.

And more kids get slaughtered every year on the 1990s-era decision to make them sacrificial lambs on campus, in perpetuity.

Another great reason to home school, if you didn't have 300 others already.

This is "settled science, yet the experiment continues, and kids are the lab rats.

Pray for the families, and get your kids the hell out of the "X" ring.
Posted by Aesop at 1:59 PM

Israeli model since Ma-alot 1 armed teacher or security officer (many are volunteers) per every 10 students. The anti good guy with a gun stops bad guy with a gun folks will say it its too expensive to do that. So what are our kids worth?

If we could get a few more shootings at private schools in upscale zip codes there would be a quick attitude change. But as it stands, if you can't home school by having a single earner you are poor enough to have your children sacrificed. Nobody cares about poor people ( and most likely you are poor while earning above the average-just by having health insurance ). And for you homos ( any of you homos touch my stuff... ) that play the Capitalism At All Costs Card, you are getting what you voted for-free market for corporations means lower wages. You get to be poor soon also. Voting for unrestricted profits doesn't mean you get a pass on your own wages, not in the long term. Straw boss elite apologists just get screwed last. And your kids shot at. Eventually. This was what you wanted after you read too much Ayn Rand.

Dakin,
So what do we do? Get somebody like you to decide how much profit a company can make? Just "big" corporation or the plumber next door's LLC too? Just wondering.
FYI. All company profits go for 1) expanding the company and hiring more workers. 2) Dividends to the owners who invest in other companies and pay for plumbers and gardeners and everybody else who does anything. 3) Taxes.
BTY I didn't read too much Any Rand, just whatever she wrote.

The percentages listed by Aesop, by the way, are from the Crime Prevention Research Center, at crimeresearch.org, for anyone who brings this up and gets challenged on it.

Hey Jim Dinkin, I suppose you are saying with big ears and monkey biotch in charge and the country with high unemployment, and lowest labor participation rate since the great depression. People were doing better than now with the lowest unemployment in 40 years. How does the progressive mind work?(oops oxymoron) high unemployment and more people on food stamps equals prosperity?

- Ability to earn & retain disposable income (like that a parent might use to
purchase home schooling curricula) usually results from choices (like putting
money away for hard times instead of impulse spending) made and life
priorities (increasing capabilities to earn more and improve one's
circumstances).
- Violence does not respect zip codes (see Chicago's 'Miracle Mile' & NYC lower
Manhattan as examples - look them up)
- Mass murderers ALWAYS choose 'soft targets' because they don't shoot back.
People who shoot back decrease the chances of survival for the shooter.
- As of late, most mass shooters are found to be supporters of far left policies,
not capitalism and profit motive. Again, look it up.

Before you folks go bagging on James, you might want go see his prepping site, before you get all tangled up.
Just saying.

He's a sour and angry guy based on his writing, who's made some life choices he seems to unconsciously regret, and the several pages I read are poisoned with repressed envy. Maybe it's just his recent posts, but he seems pretty focused on what the other guy is doing wrong in his life, and not on what HE might be doing right in his own.

So I guess I missed your point Aesop...

His comment here certainly seems to be full of BS about shootings only happening to poor people and that they'd somehow stop if some rich kids got shot instead, and then he jumps off a cliff with the classist crap.

To me, it sounds like the same envious bitter crap as his Bison site.

Seems fairly upscale to me. It didn't change anything.

As for the women thing... well, being unlucky in four wives doesn't mean that all of us are worried about our damned nails and social standing and what kind of handbag we own. I'm the main prepper here. I'm the one the got us the hell away from population centers as fast as possible. I'm the one that home schooled my kids and cooked from scratch and only bought used clothes and lived extremely frugally to make sure I could be at home with my kids in what could ostensibly be one of THE most expensive areas of the county (and my husband sure as hell wasn't earning top income - he was earning median wages for the area). I didn't marry a whining wuss, and he didn't marry an ugly woman - I used to be a model. Surprised? You might be. It's about INTELLIGENCE. Don't marry stupid women (or men). Simple enough. We've been married for 30 years now.

That off my chest, damn right. Get your kids out of schools and do it for all of the reasons Aesop mentioned.

These are the common thread in virtually every school shooting there has been. And it is the thread that the media absolutely Will Not Cover.

In the era that I grew up in, teenage boys had rifles and shotguns in the rear window racks of their pickup trucks. Shotguns were sometimes stored in school lockers for duck hunting after school. In college, we had a pistol shooting club, we practiced on the indoor range in the basement of the ROTC building. In that era, where anybody could buy guns and ammo in most any hardware store, there were exactly ZERO school shootings. What changed ?

What changed is that teenage boys who are depressed, agitated, or have mood swings (as they have experienced throughout human history) are put on SSRI's today. SSRI's are psychotropic drugs that are now known to literally ALTER the developing brains of adolescents, and are also known to cause violent and suicidal urges in a small but significant percentage of young people who are on them. This is the actual cause of school shootings, not the availability of guns, which were far more widely available in the era of my youth when there were no school shootings.

I brought my .22 with me when I went off to university CU in Boulder CO.). I did it because I took it with me most everywhere prior to that and figured why not Uni? The dorm RA got all excited about that little .22 and put the gun in his room till the end of the school year. I didn't get arrested as I would have now but seems to me looking back that 1967 was the turning point in the US.
Colorado got gradually Californicated and the US in general turned to shit - compared to the 50's/early 60's at least.
I blame universal suffrage.