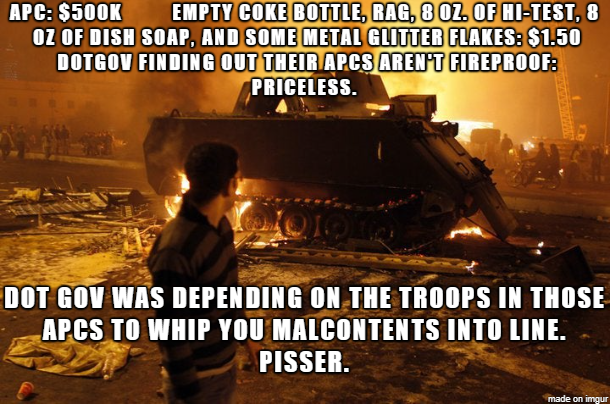 After two years of Biden, if they ever have to fight Americans, I bet they will fight just as well as the Afghani army.

No doubt the First Tranny division is ready and rarin' to go, as soon as they figure out which bathroom to use today.

so, what's the dish soap and metal glitter flakes for? Asking for a friend.

first rule of insurgent warfare: don't make unnecessary enemies. the us military are not your enemies, at least not until you go attacking them. however once attacked, you just bought an ass whipping. two/three years from now maybe not so much. dotmil is hemorrhaging its best and brightest, all that tech doesn't run by itself, not yet. but until then, offer a jack daniels, not a molotov.

Soap thickens the gasoline so it sticks when it hits.
The glitter flakes provide "condensation nuclei", which is the same reason your car is dirty after it rains: raindrops condense on fine dust particles in the air. Which is also why they salt clouds to make rain. It gives the water something to stick to.
Glitter flakes do the same thing to gasoline thickened with soap.
(The trade name for thickened gasoline is Napalm.)
And it sticks to kids. And everything else it hits.

Don't start nothing, won't be nothing.
Come to play, and there'll be a hot time in that MRAP or APC.
Unless they shoot their commanding officers, turn their turrets around, fly a white flag, and join the resistance.

Um, I was told there was a crucial difference between using soap FLAKES, and any other soap, as in that's what actually works.

36 parts by vol gasoline, 1 part by volume ethyl or methyl alcohol, 20 (powder) or 28(flake) parts laundry SOAP. there is a note "Note, Unless the word "soap" actually appears somewhere on the container or wrapper, a washing compound is probably a detergent. THESE CAN NOT BE USED."
Mix liquids, add solids slowly while stirring.

Usual disclaimers apply, for entertainment purposes and for the purposes of fiction writing and discussion only, etc.

There are other methods, including lye and fat, egg whites and weird stuff like coffee salt sugar cocoa, latex, and wax... consult a suitable reference.

And I seem to remember that styrofoam (ordinary packing material) will do the same as soap flakes when dissolved in gasoline, so don't get any in your gas tank.

@aesop, post or not, I won't be bothered, but if you can strip my name out.... why feed the beast?

Nice to see Nicks soap flakes and Styrofoam comments. The flammability of Styrofoam is why shippers changed from it to those starch based packing peanuts. Academic curiosity if they would also thicken gasoline if placed in a cars fuel tank eh?

Point of order about the pictures used here. Unlike the East German revolts in the 50's where the tanks fired into crowds, IIRC the revolts pictured in this article, the troops generally DID NOT Shoot at the Protesters. Many stories of troops being forced to give up their AKM bolts and march back to their barracks with out their vehicles. Clown world indeed.

Something about demoralized troops as they in their hearts didn't support their paymasters but were trapped in the system. In American MAYBE like the Portland Police Department perhaps? Constantly assaulted but forbidden to be effective?

So it takes a lot more than one bottle of flaming peace to disrupt the operation of an Hostile APC and you have to get quite close to throw it unless like those rioters you create almost medieval siege engines to toss baskets of them into the fray. Don't use Champaign bottles they don't break reliably, cheap Mad Dog 2020 bottles are fine.

For Historical and Academic curiosity only.