This would be bad: The Digital Gulag.

"A good tactic is one your people enjoy." - Saul Alinsky, Rules For Radicals

This would be fun:

Imagine how upsetting it might be in certain quarters if any 50M persons all created a functional (or even half-assed) AR lower from an 80% job, and affixed the serial number and markings of another one they already owned, so they had a "turn-in" all ready for Collection Day. What if  ¡gasp! all their completed lowers all had the same serial number affixed?

IBM: meet Cloward-Piven. Best wishes untangling that Gordian knot. Over and over again.

BTW: "That's a nice camera pole ya got there. It'd be a shame if a Big Truck ran into it, and every other one, and you couldn't make enough replacements even if you shifted General Motors and GE to nothing but camera production 24/7. God forbid someone makes a fake work crew, turns off your water main at 3AM, and then concretes the curbside box and shuts your downlink sites or fusion center down for a week at a time. You might could have a fire on premises right afterwards too. Wouldn't that be a flaming mess?"

Bonus points if folks making bogus "turn-ins" had happened to strip key bits and bobs, parts and sub-assemblies off first, for future use as spares.

Of course, that would be doubleplus ungood badthink behavior, and of course all those surreptitious freshly-minted criminals would now have exactly what they started with, and then some, and still be invisible little guerrillas swimming among the sea of the greater population. And poor Uncle with no screws left to tighten after their targets had already willingly "complied". 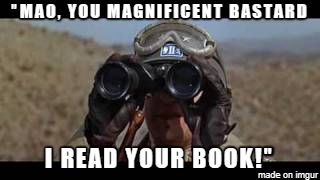 Who knows? Some of them might even gain some wee familiarity with machine tools and such, and next thing you know there'd be all these non-existing full auto Stens floating around, with no records whatsoever. Ditto for suppressors for everything.

"Now we have some machineguns. Ho-ho-ho."

Soooper Scary Thought for Mr. Batfeeb:What if metric f**ktons of Naughty People have already done that, and in fact had been doing it for years?!?

Wait: a government idea that failed epicly? Stop the presses!!!

So let's re-visit how squeezing all that jell-o through .Gov's fingers is going to work.

This is before any random little bands of good ole boys decide that a big gun turn-in is a juicy target in and of itself, whether for the materiel, or the target-rich environment, or both.

Now Uncle has to crack down, and go door-to-door.

Or more likely, go Dorner-to-Dorner, after they mega-radicalize Normies by the tens of thousands. 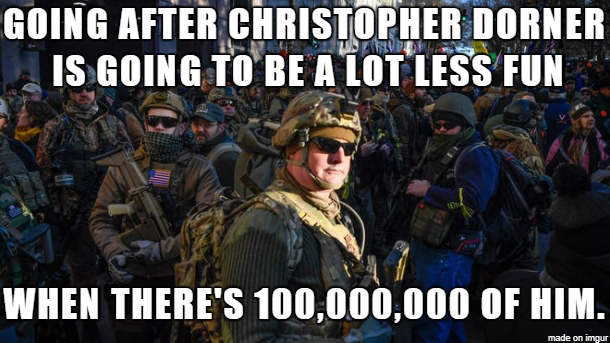 Even worse: What if some anonymous forward-thinking and civic-minded folks made a present to their trusted nearby neighbors of one of any dozen non-serialized weapons, together with a care package of a couple of magazines and a box of rounds, and left them on multiple back porches after dark, "From A Friend", in a plain brown wrapper. Some might get reported, but Uncle would never know to whom and how many had been dropped off like night letters. Many chaos. Much sad.

What if they saved a few extras to plant in the gardens or vehicles of ID'ed snitches, or mid-level targets, and then they anonymously snitched the snitches, and got Uncle to kill off or imprison his own moles and minions. "Hey, no, that's not my illegal gun, Officer Friendly!"

Of course, crooks and drug dealers haven't been using that exact tactic to wipe out their competition since bootlegging days, right?

This in a government with a long and glorious history of not being able to find KGB spies within its own CIA, FBI, and military, for decades despite people on beer paychecks driving around in Ferraris. Yeah, that's gonna work out great for them.

People from Uncle playing backgammon and checkers are going to run into serious trouble when they bump into folks who can play chess, and bother to think and plan even a couple of moves ahead.

This country was built by shopkeepers and blacksmiths, and it will be again.

Best laid plans, and all that... 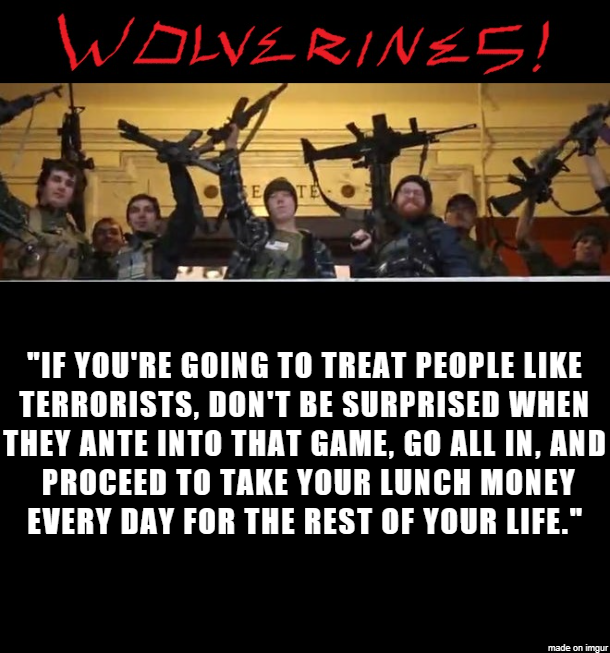 "This country was built by shopkeepers, blacksmiths and budding civilian 4gw light infantry hadgi patriot Henry Bowman wannabes, and it will be again." FIFY

I figured out at a young age to be wary of the quiet people. Still waters run deep and all that.
Fedgov been running their smartass mouth like a little guy flexing beer muscles... I've seen that story a couple of times. It never works out the way 'smart people' expect.

I am not a machinist, but I have ammo!

Well said. Imagination is the inspiration to idle hands and oppertunity.

Without Qualified Immunity, the slip and fall con in supermarkets can take on a whole new life.

Aesop, you magnificent bastard, I read your blog.