To drive home the point from today's earlier post, let's give you How To Lie With Graphs 101:

Outer Slobovia has had a lycanthropy outbreak, and I used this graph to illustrate for you who is at the greatest risk of death from it.

My Less Evil Twin, however, has told you a different story, using this graph: (B) 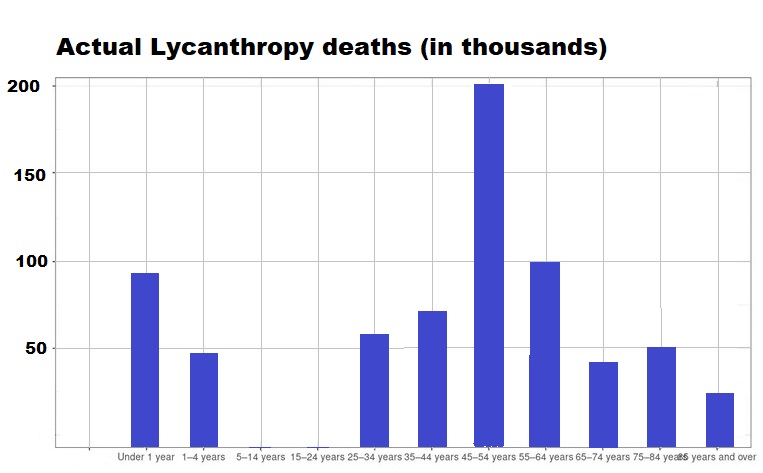 Which graph is worse?

It depends on how old you are!

So now, the poser for you, warmly ensconced in your Common Core cocoon of fuzzy math, because you're an English Major, taught only from the perspective of Writers Of Color, to avoid all that mathy racist White Supremacy:

Which one of us is fear-mongering, and lying our ass off?

Bummer for you, it's a trick question.

The correct answer is technically d) neither one of us.

Because both graphs are actually true.

The better question is, which one represents reality better?

You can't answer that, until we give you graph (C), which shows you how much of the population makes up each of those brackets.

A) Makes it look like the elderly have a far higher risk of death from lycanthropy.

Neither is lying to you overtly, but A) lulls people into a false sense of security, and B) frightens those in the hardest hit bracket.

So both of us told you the truth, or at least some of it, and yet both of us used a graph to lie to you, because we weren't giving the truth, the whole truth, and nothing but the truth. 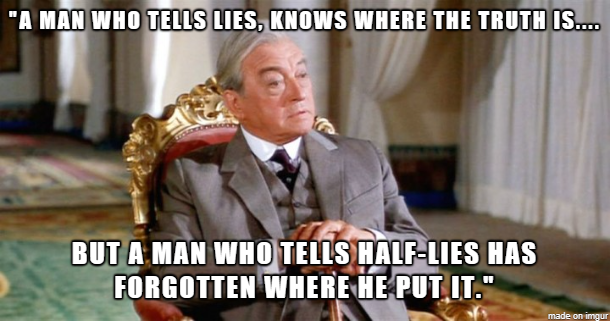 You can't do the math if the person setting up the problem doesn't give you the variables.

An honest graph would transparently break the demographic sections, not into pseudo-handy 10-year spans, but into timespans that would make each column on the graph the exact same size as it was of the actual population. That's apples-to-apples, and fair.

Just like there are two ways to slice a pizza into 4 slices for four people: 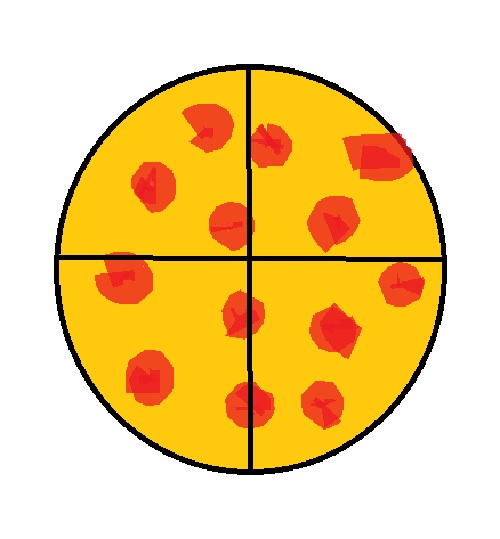 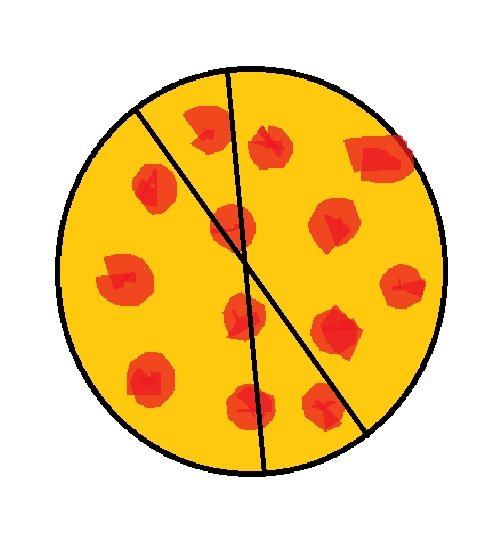 One example is fair and honest, and the other one is bullshit.

(If anyone can't grasp that, let's go out for pizza: you buy it, and I'll slice it and divvy it up.)

Crying "But I gave you one slice, and I cut it four ways, just like I promised!" for the second example is going to get your ass kicked by the two guys who get the little slices.

The same is true for making graphs that make one column look 15X bigger, then finding out it's bullshit.

This is why a shitty graph is always dirty pool, and why you need to understand math and use it to know when you're being lied to or bamboozled, just like you were taught to count money to teach you how to know someone making change is honest, or a cheat.

We yell because we care, and the internet is not the place to check your brains and believe everyone who says "Trust me. I teach statistics." 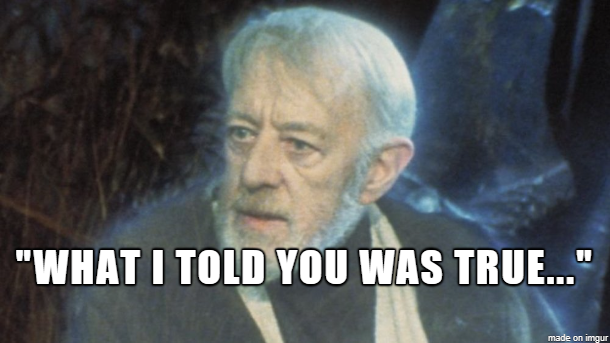 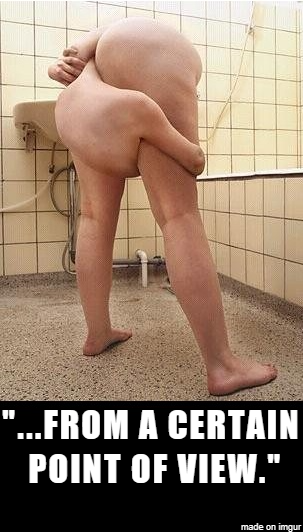 Labels: Do The Math

And has been pointed out by two of us now, the text that accompanies the graph explains effectively the same background information that your made up example here provides. The graph summarizes the results and is correct. It assumes you read and understood the material it's sourced from. Read and understood being the operative words here.

You lifted the graph out of context and provided none of it's original source information, then jumped on it and, "Hah! Got you!" Well, no, you didn't. But you did give me a chuckle for the day. And a great example for my data science students I know they will enjoy.

Go to the linked post, not one from God-alone-knows-when, for each and every time it appeared.
Does that information appear with the graph today?
No.
How about the last eleventy times it's been posted?
No again.
Case closed.
You can't read what isn't included, nor linked, and even what can be found today is of dubious utility, precisely because you have no idea what number of the citizenry lies within those artificial age brackets, absent ten minutes of unlikely research for anyone not on the autism-Asperger's spectrum.
So no, I didn't "lift it out" of anywhere, nor dis-include the non-included "source information".

I didn't lift the graph "out of context", it's been presented out of context, multiple times, and even "in context" it hides more than it illustrates. It's as informative as a baby rattle, or a cowbell on an epileptic calf.

God help anyone you're teaching if you cannot grasp that much.

The only useable info that graph provides is that older people die more than younger ones.
Not even that more older people die, simpler a higher percentage on a group of unknown size.
Like happens pretty much every day for the last 6000-6,000,000 years (If one needs a graph to explain that water is wet, they're probably not a math major. Nor even a drum major.), but which, exactly as illustrated in this post, is effectively useless information if you don't know how big a population you're talking about. Perhaps reference Jayne Cobb's math problem: "ten percent of nothing? Lemme see...nothing times nothing...carry the nothing...is..."

But as every day of the last year-plus has shown, when someone latches onto a position about COVID and the risk or casualties thereof based on their political ideology, from either end of the political spectrum, anyone else pointing out that they're speaking out of their southern end is never heard, because of the butt-cheek muffling effect.

I had a couple of colleagues look at the graph and the accompanying background material that you couldn't be bothered to look up. They agree with me that the graph is an accurate summary of the technical material as presented. One is a professor in statistics.

Getting all butthurt because more than one person here pointed out you are in error just looks bad, dude.

Yes, it's an accurate presentation of apples and oranges.
And it isn't that I "couldn't be bothered" to look it up, it's that it's not presented nor included with the graph, short of more digging than it's worth, and even doing that only emphasizes that because those artificially constructed age brackets bear no relation to each other, it's a pure apples and oranges fallacious presentation, prima facie.

Telling me that two lawyers and a used car salesman all agree that the fine print on contracts is perfectly legal (even if it's not legible without an electron microscope and five days' diligent reading) is not the same thing as saying it's honest practice.

And appeals to imaginary authority don't fix the underlying problem.

The population of <1-yr-olds and >85-year-olds are miniscule subsets compared to the size of the other demographics, to wit:
15% of 100K people dying is useless when placed 15X higher, while telling me that "only" 1% of a group of 20M people also died.

The only actual reason to therefore use deliberately mismatched categories is to lie with figures.
It's the Mercator Projection problem, except with graphs instead of maps.
This is why math-illiterates think Greenland is bigger than Africa, and why there's a moron warning label on passenger-side rear-view mirrors for the last 40 years.

When someone wants to make a point with an apples-to-apples graph, get back to me.
Apples-to-oranges graphs are inherently dishonest, deliberately so.
And posting a bad graphic purporting to show one thing when it shows something different, intentionally or not, is equally suspect.

No need to get butthurt because someone's dog pulled the curtain back on the statistical shenanigans in play there, dude.

DC
I get the distinct impression basic reading comprehension isn't your forte.

Look up the multiplicity of times that graph has been used.

See how many times the linked (and by your own repeated - ad nauseam - assertion, not only necessary, but crucial additional) information is ... you know, actually linked.

Because if it isn't, even once, then they're deliberately misleading the reader ... exactly as Aesop has been explaining to you (over, and over and over).

Now go back to your (probably imaginary) professor and try again with 'just' the graph.

Malignant narcissists re-write events so as to always present themselves in the best light. The specific quote I'm thinking of is "and the accompanying background material". Now explain to those people that you just added that little bit extra information and see what they think of how clever, smart and honest you really are.

And Doug, caught jumping on his own dick by "more than one person", resorts to the exact sort of ad hominem that occasioned comment moderation here months and months ago, and it took less than 24 hours after I turned it off.

Bye, Doug.
Pull your head out of your ass, and enjoy talking to yourself.

Jackasses like you are why everyone else can't have nice things.

Apologies for the off topic, but do you have any thoughts on this piece by Bracken?
https://westernrifleshooters.us/2021/03/02/bracken-the-digital-gulag/
I hate to say it, but I don't really see a way around it, at least for me and my wife. We are both in our 60s, and health isn't so good.
I have about 70 firearms, and I am considering selling them all at a local swap meet, rather than turn them over.
Regards

If it came to it, I would sooner die in my living room, taking some of the bastards with me, than turn anything in and get a guaranteed front boxcar passage on the cattle trains.

Even if the brain trusses above are correct which if they are I don't care, its what the dumbed down masses see and read. They are not going to look up the info they are to busy adjusting their mask while solo driving to their job at Doug's office, Doug. You sure your last name is not Cramer and your on a television program.

Dass de perfesser of statistics reely bulleeve that all the deaths between five and twenty-four years of age are uncaused?
In some restaurants one can look in a tank and choose the lobster one wants to eat. McDanald's however, does not maintain a stockyard at each restaurnt for customers to have a cow.

The truth with a hole in the truth is nothing of the truth.

Sadly perfeser of shatshitsticks sees nothing wrong with asking the McDonald's customers to slaughter and butcher a cow.