AOTUS Has The Con

(For naval types: No, that wasn't a typo in the title. Ships have conns. The Oval Office has a con. In every sense of that word. QED.)

Much has been made of the video purporting to be Gropey Dopey taking an off-the-cuff question in the White House driveway, to show how with-it and competent he is.

Find it, watch it, and draw your own conclusions.

I observe for the record, with a paltry 200+ motion picture and television production credits under my belt, and the pay stubs to prove it, that directors and lighting directors universally adore the perfect diffusion of overcast daylight, because you can't screw up a shot.

So when someone's hands waft through supposedly solid objects, his head disappears because someone's editing program can't tell a head from the sky, his suit edges look like he's walking through water because it's been ripped from the background and re-pasted in, and there's a faint green fuzzline along the shoulders of their suitcoat that only comes from a  greenscreen overhead that wasn't on the White House lawn, wherever Mr. Fraudulent was or wasn't when answering questions, the video has undeniably been f**ked with.

Handwaving, mumbo-jumbo imprecations, and comments about not believing my lying eyes are not explanatory, at that point.

And even granting that the verbal exchange occurred, it begs the question: So why f**k with the video...?

Feel free to conjure an appropriate answer, but in a bunch that has plumbed new depths with lying as a profession and art form, clearly anything, conceivable or even inconceivable, is within the realm of the possible.

Personally, I do not think Gropey Dopey is deceased.

That would bring about President Kneepads, which is something for which no one but Kneepads longs. I put it to you: Token Diversity Hires never ascend to being CEOs. It's simply not done.

But Gropey Dopey drooling his pudding and wetting his Depends, which has probably been every day for months anyways, is perfect.

Carte blanche for Edith Wilson Biden and The Committee Of Wakanda Wokeness to get every bit of looney Leftist whacktardery they can imagine in their most fevered ecstasy, and no one to stop them. It also explains no press conferences, at least until they can drug him up and program him to give enough answers for the verisimilitude of competence, and get another six months of soft coup. 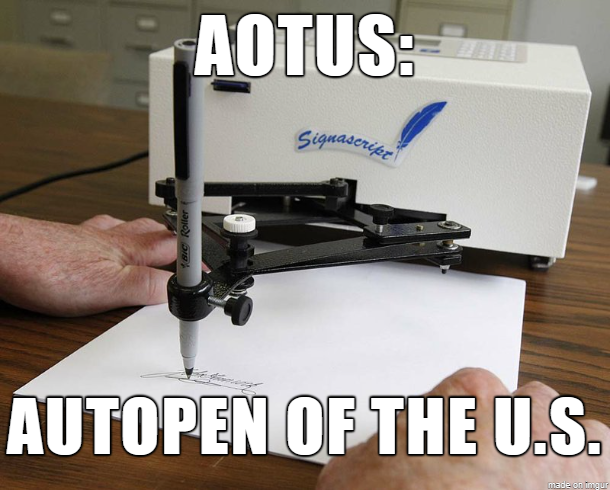 It cannot uphold the Constitution, but at least it can reproduce it with exquisite fidelity.

Cue the band to strike up Hail To The Thief.

BONUS: OddJob has obtained a copy of Gropey Dopey's weekly schedule for every week since Jan 25th, inclusive. You should go look at it.

I first thought that you meant asshole of the United States.

I haven't watched the video myself, but I've heard plenty about it, and I figured you'd have a none-too-gentle lesson in why this is all conspiracy-theory horses**t.

Now I'm wondering if the Commander-in-Thief will actually show up for his announced press conference next week.

Consider that by keeping Dodderin' Joe away from reporters who might ask tough questions, they will be able to maintain the facade that he has everything under control and that there is nothing for the public to be concerned about. (The letter signed by 30 House Democrats asking him to share the nuclear codes undercut this notion. Was he supposed to conduct a Zoom call before launching?)

The longer they can keep Biden reading from a teleprompter and not answering questions, the more likely those who are actually running the show in the background will be able to pursue their Leftist agenda. Consider that in most administrations, it is in the first 100 days that landmark bills are most likely to get through Congress and be signed into law. The clock is ticking.

Once Biden makes a dramatic gaffe, or gives evidence of a dramatic loss of a train of thought that conservatives can claim is a strong indication of senility, the situation changes dramatically. Then the discussion becomes whether the 25th Amendment's removal provision should be executed. It will be Biden's "take the keys away from Grandpa moment" and it will tie up the national discussion for weeks, if not months.

Even if Biden is removed from the assisted living home at 1600 Pennsylvania Avenue, this will leave sitting in the Oval Office Kamala Harris, a candidate that no one liked in the Iowa Caucuses and who bowed out of the race before the caucuses were even held. Sure, Oprah and Michelle Obama and other party-line Purple Kool-Aid drinkers will swoon over another person of color (one of the clunkiest expressions in the English language now) occupying the Oval Office again, but she will be a weak candidate to go against at least five Republican alternatives in 2024. Their best hope is that she will "grow with the job" and ingratiate herself with voters because the Democrats' bench is so shallow that the thought of trying to select another serious Democrat prospect is grim. (Cuomo is dead meat. Newsom is up to his hips in alligators and is unlikely to fully recover even if he beats the recall effort.)

Democrats recognize that they must get their agenda passed as soon as possible and they will prop up Biden as much as possible for as long as they can as if we were watching "Weekend at Bernie's."

These Biden green screen videos are a dry run.. See what the press and public will fall for?. How "good" do these have to be to pass them off?

They are recording lots of Biden green screen shots. They can use them at will. They know he is going to die eventually and soon. Once he is dead they can mutilate the body with a stabbing? a gunshot? whatever. They will run a green screen showing a disgruntled national guardsman offing the pres.

They have the whole place locked down, no public, no witnesses, no outside video, no one in and out, the press will take the security videos handed to them as gospel.

Voila' dead president,, an excuse to run all evil conservatives out of the military, hunt down any and all conservatives and enact strict gun control.

You think they aren't that smart? they have taken over the entire US govt and likely the military already. This has been planned for years, what if slo-jo is there for this exact reason? A body waiting to kick off. Do you think they just happen to have had miles and miles of 11 foot high fence just laying around DC to be installed in a days notice? hmm?

What if the guard is there simply to be used in some sort of ruse like this,, the guard is more likely the only remnant of the military that is not infested with liberalism as they are ordinary working folks from the flyover states.. The cabal running the show will need to get rid of them somehow. And install their own brownshirts for security.

Any other ideas out there? Assume the videos are not a stupid accident by morons. Assume this is all willful, even willful poor greenscreen thrown out to us to debate. Maybe a ruse to take us off track?. Assume they are recording lots of poses and shots all the time with their Biden actor in the basement somewhere. What would be the reason? I guess maybe just to pretend he is still pres for a few weeks even after he dies? But what is the point of that? Kamala would be easy to install.

Anyhow,, that is just my two cents worth based in my belief that this is willful, long planned out, and simply evil.

AOTUS. Love it. At least it doesn't need Depends.

Saw some semi-plausible attempt at an explanation by some rando on YT. Still didn't really buy it because the side angle shot showed boom mics that also looked...unrealistic. I'm having a hard time with the idea that the SS allows boom mics so damn close to the person occupying the office of the President that they can massage his armpits.

But whatever, I'm with you, why fuck with the video? In his latest WH feed where he's barely aware of reality right before they cut to the title screen, he's inarguably green-screened. Why? Are they doing it from his medical suite where they show him from the waist up?

And I think he's alive too, but I really wanna know what they're pumping into his veins. If there's one good thing we get out of this faux presidency, it will be major advances in pharmaceutical remedies for cognitive decline. Getting a coma patient to talk is no mean feat.

SpaceEx landing back on the launch pad seems odd to me

Every time I see that Biden trot, I am reminded of one of two TV characters :
Mister Tudball's attempts at running, in the Carol Burnett sketches
Amos McCoy of "The Real McCoys"

My own suspicion is that every effort will be made to keep Biden alive until January 21, 2023. After that, he's expendable.

But of course, God laughs while we make plans.

FICUS. Fraud In Chief of the United States.