So, seriously, what's the CFR on Kung Flu?

If you line up bloggers (for but one example) end to end on that question, they'll point in all directions. Or will they?

Let's try working backwards.
There are currently about 42K dead, as of this morning.
(That's the speedometer you have. Live with it.)
If the CFR was "just the flu, bro", that would require that to have the same CFR as annual flu (0.1%), 42,000,000 would need to have been infected thus far. That's about 13% of the US population, nearly 1 in 7.

Even the recockulous Stanford paper, not yet reviewed by anyone without an axe to grind, only posited about 3-4% of the population was infected.

So we'll call that the Rosiest Extrapolation Line.

Let's try that for NYFC.
They have 14,600 dead this morning.
There are only 9,000,000 in the city.
If we look at the NYFC Metro area (all the burbs nearby, incl. in Joisy, Lon Gisland, and Westchester County), it's about 18M people.
If the CFR is 0.1% it's infected somewhere between 81% of the entire metropolitan area, or else it's infected 162% of everyone in NYFC.
(If you're wondering how it could infect 162% of the population there,
a) you didn't learn math via Common Core methods
b) you're not a DNC vote counter
c) this is simply impossible; Duh.)

So
a) the CFR is clearly one helluva lot higher than 0.1%
b) If we take the Rosiest Extrapolation Line, and 4% of New Yorkers have been infected, that would be 360-720K, depending on whether you want to count city dwellers, or the entire metro area.
c) 14.6K dead gives you a CFR for those two populations of between 2-4%. Color me shocked. No points for scrolling back a month or more, and see what exact guesstimated CFR I used to calculate potential casualties. {Hint: It was 3%.}

Hmm.
Maybe we're starting to zero in on things here.

Let's try somewhere not as egregiously affected by this, and who hasn't for example, still got their gorram subway running every day. just to be sporting about this.

I know. Let's try Florida.
According to his daily updates, McThag, who's made a small hobby of disagreeing with me on damned near anything possible, has calculated Florida's rate.
He has zeroed in, over time, and entirely on his own hook, right around the 3% mark as well. 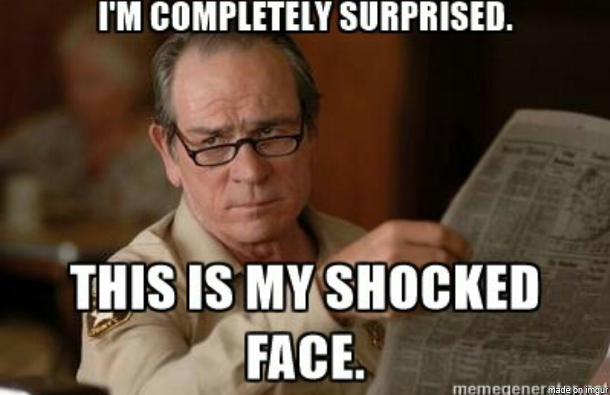 His numbers take known positives divided by number dead, with a shade over 1% of the entire state having been tested for Kung Flu.

If, in the wildly optimistic Stanford paper assumption, 4% of FL has been infected, then the number of positives should have been 11K, not 27K, out of the 284K tested.
And only half as many people should have died, unless the CFR is much higher than 3%.
So either even the Stanford paper guesstimated wrong by 100%, and 8% of the state has it, not 4%, to get those requisite number of positives actually found by testing; or else FL just got randomly lucky, and managed to find more positive people by pure luck. 17,000 more lucky times, so far.

Or else the rosy assumptions from Stanford are so much rose fertilizer, rosy in both directions, and not applicable to anyone but Yuppies in Silicon Valley, after oldsters there (they didn't correct the sample for age, and picked them off of Facecrack) were self-selected out of the whole invalid survey sample, and the actual infection rate differs state to state (which explains why states that ignored lockdowns until too late, like NYFS, got the shit kicked out of them, while Wyoming, with more cattle and horses than people, doesn't even know what we're talking about with this "imaginary pandemic", and Angus' calculations of the CFR in his neck of the woods are running just about spot on.

When you keep triangulating from different points, and different people do it, the odds of where reality is, get narrowed down pretty quickly, unless you were resecting with fat crayons.

With 42K dead, and a CFR of 3%, this thing has infected about 1.4M Americans. Which is exactly double the number confirmed by testing, meaning to a large degree, the other 700K are exactly the totally asymptomatic carriers well-known from this outbreak going back to Day Zero. And it only amounts to about 0.5% of the country infected, not 4+%.

That means, before everyone everywhere decides "Fuck it, let's re-open everything everywhere, because we're smarter than everyone telling us not to", that you only have
328,600,000 Americans who haven't been exposed to Kung Flu yet, but that you'll probably kill 3% of any additional people you give it to, to a final tally of dead anywhere between today's 42K and  a worst-case upper limit of 10M, depending on how stupid you want to get.
(So far, that depth of stupidity cannot be estimated with existing technology, because exactly like peak oil, every time a theoretical maximum is reached, new discoveries show orders of magnitude more capacity exists in reality.) And you have no wild idea how far you're going to drive that tally up, but you'd rather risk all 9.96M you haven't managed to knock off, yet, because your pussy hurts, and science is just so much magic to your cargo cult of idiots.

Just so we're all clear on this.

The Dumbocrats have now unequivocally owned the shutdown.  (And overwhelmingly, all the asinine draconian overreaching bullshit perpetrated because of it, too.)
And TPTB in NYFC have owned what happens when you treat this as a hoax.

So now, the (overwhelmingly) Right Wing shit-for-brains contingent wants to step up to the current USA Kung Flu Death Tally, and say,


"HOLD MY BEER."
In a weakened economy, in a presidential election year. Despite the historical example of the Spanish Flu, where the second wave re-emergence killed more people than the opening salvo.﻿
Rock On With Your Bad Selves.
We told you, and are still correct in doing so, that the deaths from this virus were the least of your concerns over it, and the second, third, and fourth- through N-th level effects were going to roundly kick the ever-loving shit out of you. Exactly as they are, and will.
You ain't seen nothin' yet.
And the answer from the side of the political spectrum that goes from middle right, to right off the deep end, is "Hell Yeah! Iceberg dead ahead. Flank speed forward!"
I have yet to crack open so much as one can of my emergency reserves of anything over this, or spend a nickel of savings. But then, I wasn't talking out my ass about preparedness for the last 10-20 years, I was actually getting ready for bad days.
For some other people (quite a lot, I suspect), all this has done is show what blowhard jackholes they really are, while catching them with their hindquarters suddenly flapping in the breeze.
Now they want to play chicken with Louis Pasteur, Germ Theory, and Kung Flu?
B'Bye!!!