The Art Of Fail 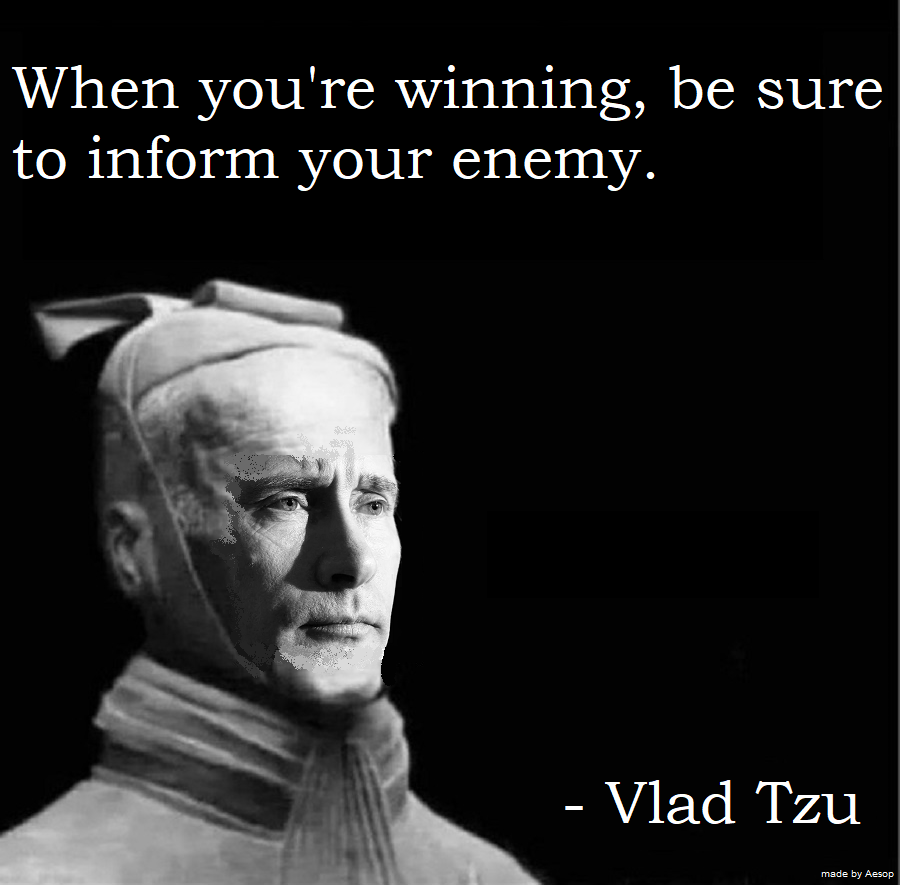 I enjoy your blog. With that said I think you are uninformed about the reality of the situation. Minor gains in a largely undefended area when the autumn rains are starting means nothing. When the ground freezes and 300k russian soldiers show up it's game over. And say goodbye to Odessa.

Aesop you used to be good a linking sources but lately not so mucho.

What sources are you missing?

"Minor" gains?? You mean the ones it took the entire Russian invasion force six months of daily shelling and hard fighting to achieve with favorable weather and roads? After redeploying half their invasion force from three failed axes of advance?
Tell me again who's uninformed about the reality of the situation. Your attempt at spin is amateurish and ham-fisted. "The grapes were probably sour anyways."

When the ground freezes and 300K poorly-trained, ill-equipped, and totally unwilling old men are thrown into the sausage machine, it's liable to be game over, all right, but not likely in the way you assume.

The Russians not only can't take Odessa at this point, they stand a very likely chance of having the Crimean peninsula cut off again if the current offensive cuts the land bridge to Russia. Then Russia not only loses what they stole this year, they risk losing what they stole in 2014. Ukraine has the bit between their teeth, and Russia, so far, excels only in retreating at speeds not seen since Patton kicked Germany out of France in 1944.

Throwing a herd of cattle into that mix isn't likely to bring order out of chaos, but it will up the casualty count substantially.

You operate up in details I & others tangle.

Long ago I was “one of those guys” who would have been tasked with planning, leading, and executing this exact type of mission.

To recap: I’ve locked in and out of nuclear subs. I’ve been a passenger inside mini-subs (SDVs). I dived with air, mixed gas, and pure oxygen (shallow but no bubbles.) I’ve practiced with every kind of explosive above ground and underwater. I even cross-trained with the frogmen of Norway, Denmark and Germany, among others.

One thing I can say with 95% certainty, based on the repeatedly demonstrated caution of our military leadership: this kind of mission would NOT EVER rely on torpedoes dropped from a P-8 Poseidon long-range patrol aircraft, which is basically a military 737. (In wartime, yes, they’d drop torps to try to destroy enemy subs. In peacetime, this would be a sledge hammer swung blindly in a china shop.)

Why not use the P-8 and air-dropped torpedoes for the pipeline mission? ASSURED CONTROL.

In the past, US Navy and NATO warships have, in training, fired medium and long-range munitions and had disastrous outcomes. Once, a USN ship fired a Sparrow missile and hit a Turkish warship by mistake. Turkish sailors were killed. WHOOPS! Another time a Tomahawk hit a Danish seaside villa (unoccupied, thankfully.) WHOOPS! I could list many, many other “whoopsies!” on this vein when medium or long range ordnance is used. (Theories about TWA Flt 800 also come to mind.)

Multiple torpedoes dropped from a 737 fall into this extremely high-risk category. When doing wartime ASW, you’ll drop all the torps you have going after one enemy sub, “stray” torpedoes be damned.

But in peacetime, as a covert operation weapon? NO WAY.

When you plonk a torpedo out of a USN 737 P-8 jet, there are myriad ways it can turn into a wrong-way “own goal” or a dud that goes aground on a beach on, say, Bornholm Island. Odds are much worse with 4 torpedoes. Not a good look in the world media if 2 or 3 out of 4 pipeline targets are exploded, but a “stray” USN torpedo is photographed next morning on a beach, or is later found, intact, during an investigation, near a pipeline.

To approve a peacetime covert operation like this, the military brass want assurance of a 99% success rate. With 4 targets, that means each weapon must be EXTREMELY reliable and under VERY close human control. With the ability to self-destruct on command at any point in the mission.

That’s why I show these images a lot. The Kearsarge Amphibious Ready Group spent the summer practicing “counter-mine warfare” in the western Baltic (a NATO lake).

Why is this significant? Because “counter mine warfare” can become “pipeline demolition” with a mere change in targeting. (In my old life, this kind of “training” was also known as “cover for action” in spook lingo.) Trust me, a modern enemy sea-mine the size of a refrigerator, half buried in silt, is MUCH harder to find than a pipeline, located on every chart to the meter!

Our military brass are VERY risk averse on controversial covert operations such as these. To sign off on this mission, they would demand that every aspect of the mission be practiced, recently. Training, plus “cover for action.” The high brass don’t just say, “Hell yeah! Why not! Roll the dice! What the hell! Go for it!”

They didn’t get to be peacetime admirals by taking wild risks. They are by nature risk-averse.

They’ll only sign off on a high-profile peacetime covert operation when they are sure their forces can do the mission and not get caught, or leave evidence behind.

Please watch the embedded 4 minute video in the first link, and the short YT video at the 2nd link. Then I’ll post again.