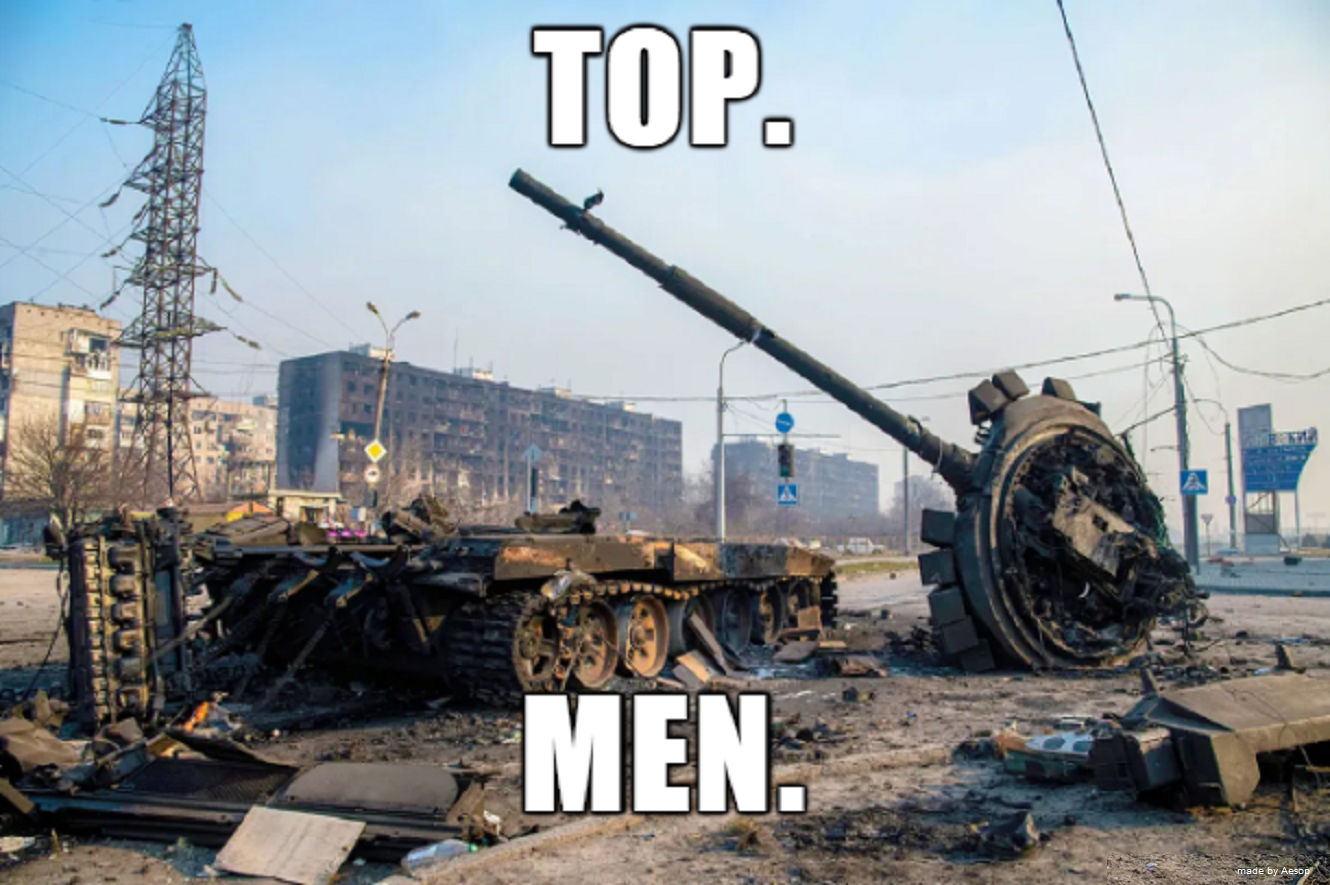 It Was All A Sham

The 4th Guards Tank Division and 2nd Guards Motor Rifle Division-and by extension the whole 1st Guards Tank Army-probably are unfit for further fighting. They could reconstitute, but with what and whom? The Kremlin's urgent recruitment drive is faltering. And having written off more than a thousand tanks in Ukraine, the Russians might need years to bring depleted units back up to full strength.

The Ukrainian army by contrast has more tanks now than it did before the current counteroffensives, as it has captured more Russian tanks than it has lost of its own.

Ponder that when you see Russia press-ganging geriatrics and cripples for the front lines, trying to renovate 60-year-old tanks for military service, and rattling its rusted nuclear saber.

It's because they haven't got anything else to spare to throw at this war.

And the Number One supplier of military equipment to Ukraine, for weeks and weeks now, and by orders of magnitude, isn't NATO; It's Putin's raggedy drunken Russian Army.

What do you want to bet that a large percentage of the billions Moscow allocated to modernize its armed forces following their underwhelming performances everywhere from Chechnya to South Ossetia wound up bobbing gently at anchor in Monaco and Barcelona?

No bet.
Pisser for Vlad-o-philes.
*{link for Common Core grads}
Posted by Aesop at 10:40 AM

Labels: epicaricacy, I meme to misbehave, like the military - but in Bolivia or Zambia

Trump is still secretly President and has been masterminding everything to make his return in glory that much more devastatingly wonderful.

The Storm is coming.

You mean that the corrupt & kleptocratic dictator of a state long known for corruption, embezzlement, oppression, nepotism, shoddy engineering, even worse production, propaganda, drunkenness- the state that gave us the very idea of the Potemkin Village- that state is lying about the state of their military?

Sir! I must protest! Horrace Smith's version of the poem is the superior one.

I would bet on them to accomplish more when drunk than the U.S. can anymore sober. Humility is the beginning of wisdom. Get some.

One thing that has struck me repeatedly is that the Russians show flashes of superpower status with initial attacks but they seemingly can’t sustain these attacks. The recent city attacks show a decent hit rate decent damage but no follow up. I remember well being in discussions to support gulf war 2.0… the logistics tail for that was a cluster due to Turkey being a turkey. All of the old salts always erred on over supply of critical smartish weapons. I thought they were sand bagging. But they were right. Electronic wizardry always seems to cost reliability down range. Ultimately modern warfare is about fighting like gulf war part 1 with images of innocents driving blissfully over bridges that are then center striked moments later. Making that happen at scale is HARD… keeping the pressure takes high maintenance and an f ton of spares. Obviously Russia does not have the ability to keep it up … so to speak. This whole war is historic in many ways.

I'm starting to think Vox Day may be wrong.

It's not the cost and time to build a new tank (Armata) but the time to train up a crew that can make use of a modern hi-tech equipment that makes it something more than a very expensive target. A driver can be trained to competency in six months or so, a tank commander three to six years. Three years to be able to operate as a single then another three to operate as a team and take command of a section if needed.

Some of the newly mobilized Russian soldiers are already coming back in body bags. One was an important department head in the Moscow Government. Now military aged men in the Moscow Government are fleeing Russia. We had some few thousand draft dodgers in the Vietnam War, not hundreds of thousands. They delayed the normal Twice a Year Russian Conscription until November 1 to complete their farcical Limited Mobilization. I wonder how many Russian conscripts will report on 11/1 knowing that they might be assigned to four newly acquired Russian Provinces?

The Crimean Bridge at Kerch is limited to automobile traffic only. No trains or trucks. Russia is shipping military equipment to Crimea using four operating ferries. How long will it take to repair that bridge? I also wonder who drove the bomb from Russia across the bridge (almost) to Crimea? And Why?

I would bet on them to accomplish more when drunk than the U.S. can anymore sober. Humility is the beginning of wisdom. Get some."

If these examples are news to you, you're not tall enough for the internet.

Russia winning a war is an aberration, not an ordinary occurrence.
You could count their military victories since 1700 on your thumbs.
History isn't subject to delusional revisionism.
Clues: Get some.

Thanks for playing, and we have some lovely parting gifts for you...

"Russia doesn't lose wars" is up there with "Joe Biden is an honest man" and "Bill Clinton did not sleep with that woman".
Not only are they lies, but they are stupid obviously lies that take deliberate double think to tell.

This might answer a few of your questions. Behold, the history of a truck bomb:

All his sources are listed in the last entry.

"I'm starting to think Vox Day may be wrong."

Not sure what Vlad's endgame is at this point. Not sure he knows, either. Did you get the meme I sent ya?