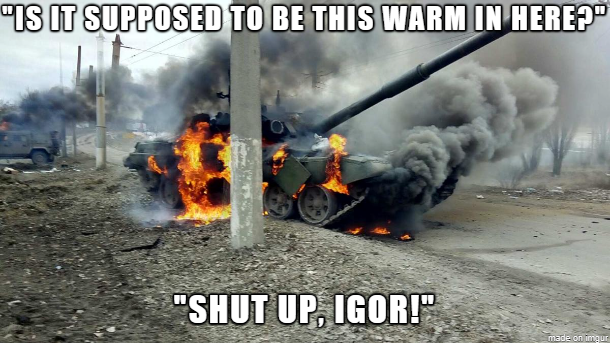 "If Russia isn't stopped in Ukraine, it will have to be stopped in Warsaw.

Russia has already lost its main goals. More countries joined a strengthened NATO. Ukraine is more independent and nationalistic than ever. Just as bad, Russian equipment, training, and leadership has been shown wanting. The war has been lost. Now it's a matter of how long the fighting will go on."

We've been telling you this, and more, since March. There's no version of "Russian victory" in this conflict that doesn't start with "pyrrhic". In fact, they've already blown past that Rubicon, and proceeded to "Mariupolic". The only measurement left for Russian "victory" at this point is "Carthaginian", and it's still theirs for the grasping.

Contrarian whingers: explain to the class when it's acceptable for one country to conquer another country, and forcibly annex their territory and people at gunpoint, bearing in mind the current date. Show all work.

Plus Matt Bracken’s latest “imagine if some American states drifted away and China began trying to put missiles in Canada” post.

Aesop,
No argument with your main premise. However,

"Contrarian whingers: explain to the class when it's acceptable for one country to conquer another country, and forcibly annex their territory and people at gunpoint, bearing in mind the current date. Show all work."

Well, what's acceptable has nothing to do with it. Many, many swinging dicks throughout history with a large army and time on his hands have acted in that unacceptable manner.

You, of all people, KNOW that War is a constant, and Peace the aberration.

What is "acceptable" is subjective. Current date? Human nature does not change.
How many divisions does "acceptable" have?"~J. Stalin (paraphrased)

Russia cannot conquer Ukraine. It can only destroy it.

If they let it happen, the destruction of Ukraine should be hung like millstones about the necks of the Russian people for a hundred generations. Their guilt will be absolute. Let them be known as thieves, murderers, and traitors to all. Let them be shunned by good people and find no solace, safety, or peace upon this Earth.

Six Bears missed it by this much | |. UA is busy turning captured RU gear into new BTG units. So it is not material or equipment but leadership/tactics. When YOUR enemy is throwing YOUR ordinance YOUR way, management needs a rethink or replace. So far Putin has fired generals like Lincoln did looking for a winner. The question is will Putin ever find his Grant?

If Putin was as far-thinking as the press contends, he would have been building up his forces since 2014. If he was challenged about that, he could have blamed his neighbor China.

Similarly, he should have checked to see if the muscle and materiel that he had on paper actually existed. Russia is as corrupt as Chicago. If he started in 2014 He would have had time for corrective action or a change in plans. After all, President Trump put on several air shows in Syria to prove that our stuff worked, our como was good, and our troops knew their jobs.

Seems that ex-KGB Major Putin was too caught up in the Soviet dreams, to actually go out and kick the tires. Effective Divisions don't just happen. Potemkin still lives in Muscovy.

I think GROFAZ 2 got a bit overconfident from Biden's Truman gaffe in addition to actually believing the Potemkin readiness reports and intel assesments.

It was a good plan- hit Ukraine hard, win fast, present Nato with a fait accompli, and then plan his next move.

But it was not to be. The Ukrainans fought much, much harder than expected- they were supposed to act like Iraq 1991. The West didn't buckle under and turn a blind eye. And the Russian Juggernaut, wasn't. Like most Russian Juggernauts in history, and for the same reasons. So GROFAZ 2 is kinda stuck like that skwirrl in the meme dangling by his popos from the bird feeder. He might be able to brute force a conquest, but the longer this goes on, the worse it gets for Russia.

The Ukrainian People could have simply refrained from shelling and murdering their Russian cousins when they wanted to go their own way back in 2014. Now they are simply going to have to live with a third of their former country rejoining Russia and taking their lands with them.

Aesop and friends simply got to insist that political boundaries never change according to realities. They do.

Reminds me of the speaker at my high school in NYS back in the early 70s, who waxed euphoric about the idea of Quebec seceding from Canada and becoming an independent nation, non-aligned.
When it was time for questions, I asked him if he was endorsing the idea of the then Soviet Union establishing a military presence? Before his handler could stop him, he gleefully answered yes, and the Mohawk indian with him said that they were negotiating treaty rights with the Sovs. The local media didn't run that footage, I got beaten up again, and I was suspended for "disruptive behavior". My parents were so disappointed with me that Dad took me to the gun store he co-owned and told me to pick a firearm worth up to $250 and take it home.

Unfortunately, your dearth of adequate historical research has left off mentioning that the Russian "cousins" they were shelling were Spetznaz and paratroopers in mufti, pretending to be popular militias, infiltrated right after Russia thievingly re-appropriated Crimea. When even network correspondents could figure this out in person, on camera, back in the day, but you still can't do so eight years later, you're not helping your case.

Vlad's ongoing total inability to affect who those lands belong to isn't helping his case.

But watching him pull his own pants down on the world's stage, and show his own ass in embarrassment (which is literally where the word comes from) is high comedy.

Hypocrisy Alert: Since you think national boundaries are transmutable on a whim at gunpoint, tell the class how much of the United States should be handed over to Mexico on their mere demand, and how much of the contents of your wallet or household goods and chattels ought to be given to street thugs just for the asking.

Most of those burning tanks and APCs are Ukrainian.

So let's say, contrary to all available evidence, that the Russians are destroying everything the Ukes can throw at them. Now tell us why the Russians are in headlong retreat from dismounted troops, and preparing to evacuate Kherson?

This should be good.

Sure, Ukraine is kicking Russia's ass in this war. I agree with you on that point. The country is a fucking mess right now and will take decades to rebuild and billions of American dollars to do so. Vlad continues to lob ordinance over the border. Hope the winter is mild in Ukraine.

What good is playing Bagdad Bob for Putin doing for us as American patriots?

No, I don't mean questioning our motives, obligations, and so on.

The Putinite lying is on the same level as the Bidenite lying.

Aesop, ever heard of a tactical retreat? Ukrains attack, Russia pulls back and puts the Uks under battery, killing loads of them. Russia is waiting for the frost, the ground to freeze. History tells us Russia fights best in the winter, oh look at the clock, it's almost November!

You should read history instead of trying to pull it out of your nethers.
Russia defends best in winter, because unlike multiple invaders, the winters there don't come as a rude shock.
They don't fight best in winter (or, really, at any time, as we've noted in other posts. Their total national victories from 1700-present could be counted on your thumbs.); what they do is sit back and let winter do their work for them.
That isn't going to help them in Ukraine.
Thanks for playing, and better luck next time.

"Aesop, ever heard of a tactical retreat? Ukrains attack, Russia pulls back and puts the Uks under battery, killing loads of them. Russia is waiting for the frost, the ground to freeze. History tells us Russia fights best in the winter, oh look at the clock, it's almost November!"

Dude has just proved my point- what help is there to the Patriotic American to post obviously stupid, unhistorical, and just plain false propaganda points in favor of a corrupt Russian Dictator? Stuff like this just makes people like you look like an easily led clown.

Which side am I on?

My family is from Finland.

I remember Malaysian Air MH-17. The "Ukrainian Rebels" did not shoot it down with their AK-47s and RPGs. It was a Russian SAM, and there is video of the launch vehicle hightailing back into Russia with a very smoked empty missile cell.