h/t Middle Of The Right 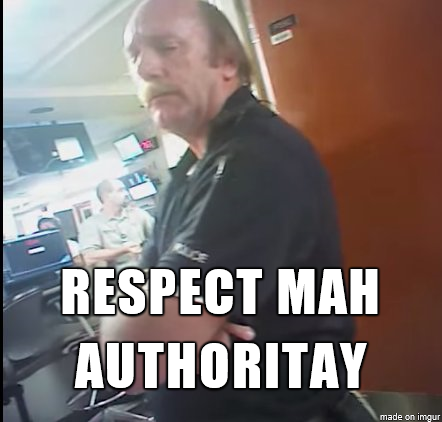 Nurse arrested by Officer Douchebadge for following the law settles for $500,000. 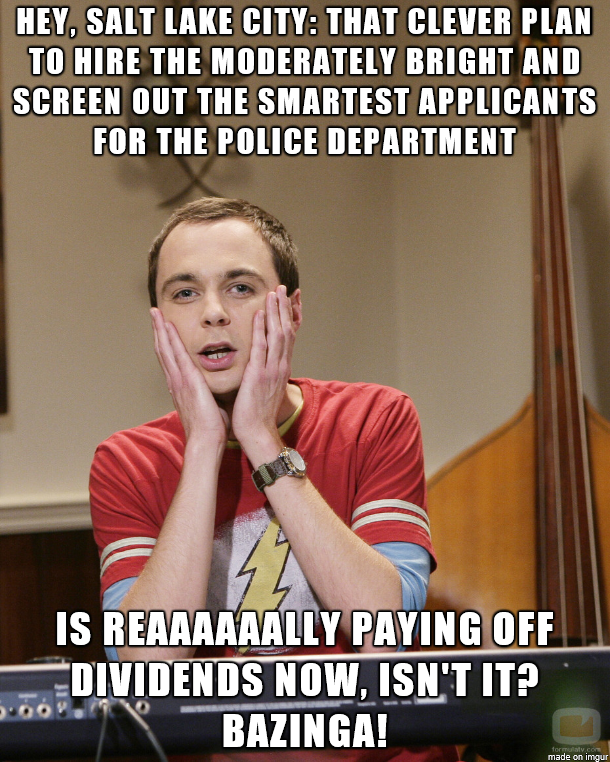 I'm guessing mediocre lawyering. There should have been another zero there ahead of the decimal, minimum. 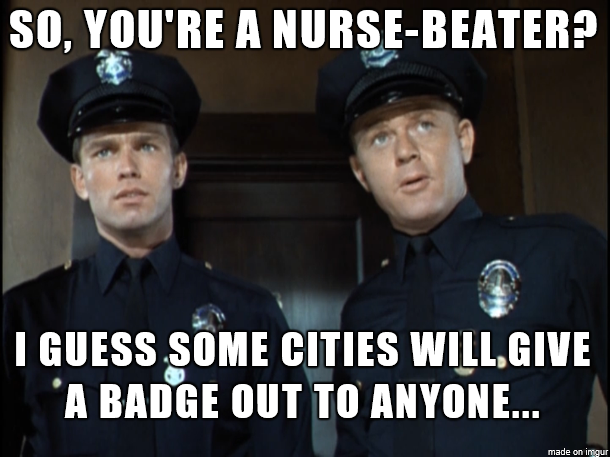 And, as usual, the idiots at Fox News fucked up the story by the first line: she didn't refuse to let Officer Douchebadge draw the blood. She refused his illegal demand that SHE join a criminal conspiracy to draw it HERSELF, and become an accomplice to battery on an unconscious patient, and violation of civil rights under color of authority. Pity Fox can't afford anyone with a high school diploma to look that detail up for them. Layers and layers of editorial oversight. 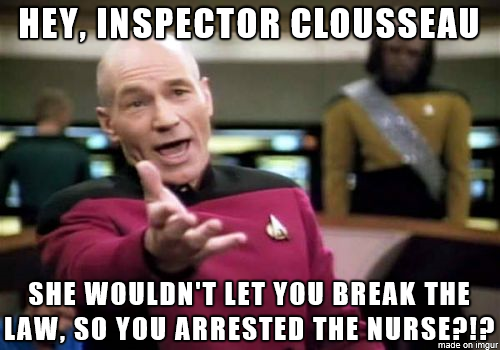 And rather than being charged criminally under state and federal law for those felonies, Officer Douchebadge, though fired by SLCPD, is still free, and trying to get his old job back. No, really. 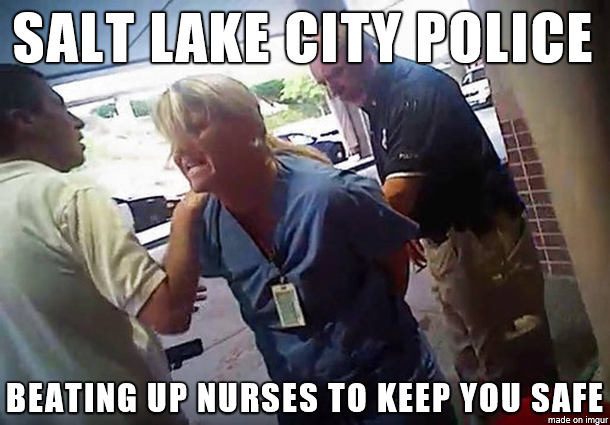 If ever someone needed to go away and eat his gun for the good of society, Officer Nursebeater is the poster child. 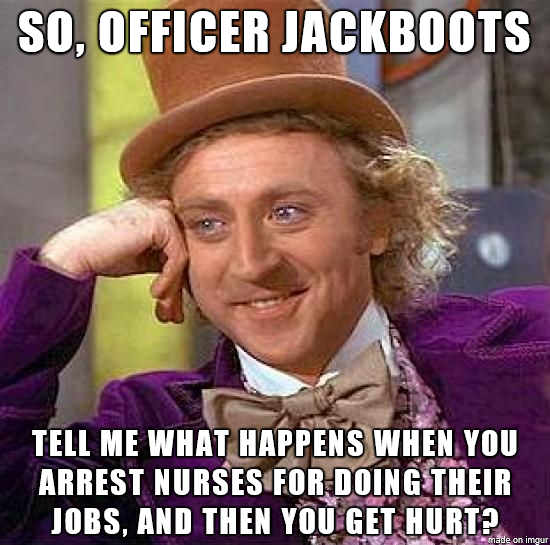 There's only one thing we have to thank him for: Officer Douchebadge's inspirational, brazen, and profligate violation of his oath, the law, the US Constitution, and all common sense and decency, and his total commitment to outright over-the-top jackbooted thuggery, which he'd obviously been doing his whole career, roused us enough to begin memeing. (5-8K of 'em, at last tally.)

You can blame him or thank him, as ye will. 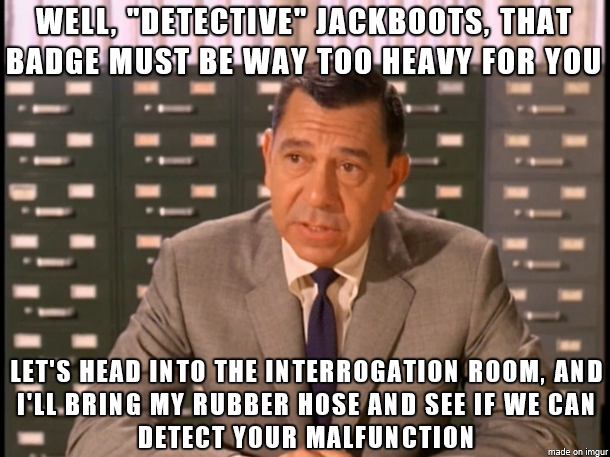 Either way, he's still unmitigated human debris, and his entire family line should be erased from the genetic pool, on general principles. And anyone who killed him, deliberately or accidentally, should receive a Presidential Medal Of Freedom for public service. 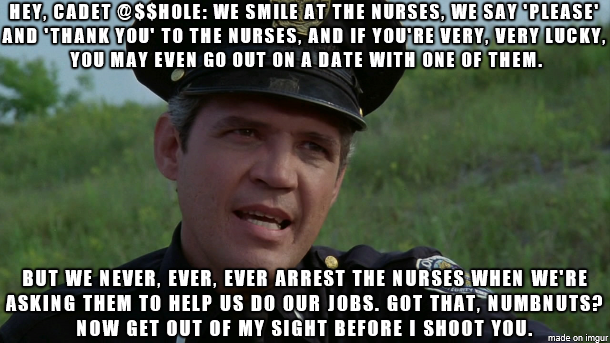 At the very least, the Governor of Utah and the Mayor of Salt Lake City should both award that nurse a commendation for upholding the actual law far better than the douchebadged thug at SLCPD did that day. 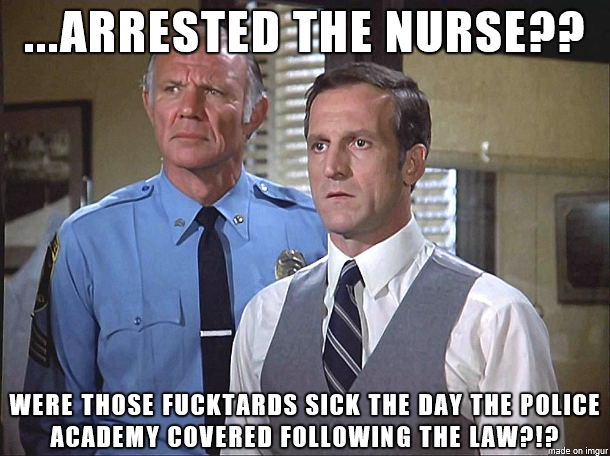 There's already enough sheep pens in Utah that the state, and the nation, could be considered well rid of that additional giant piece of walking shit, and anything that happens to him between now and whenever he kicks his oxygen addiction is totally justified. 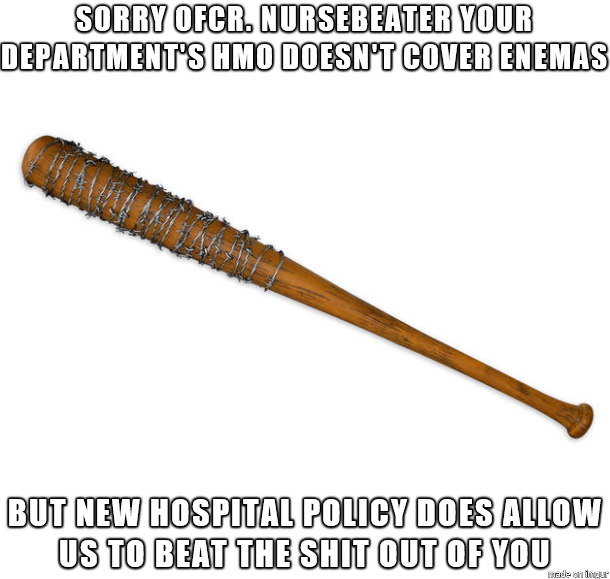 As a former street cop in the late 60's, I find this kind of story...almost amusing. Nurse refuses to take blood? Speak to her supervisor. Supervisor concurs with the nurse, contact your supervisor.

Should the cop be concerned? His only charge is being responsible for custody. ...And meanwhile, somewhere in the city, fresh doughnuts are cooling on the rack....

Hopefully he'll need a Catheter inserted at some point and the nurses remember him and go with the French Catheter one or two numbers larger than his hole.

@elysianfield,
But this douchebadge could barely stand up against gravity under the weight of his own awesomeness, and when the nurse refused to play along with his criminal requests, rather than doing anything intelligent, he instead arrested her, manhandling her outside, and slamming her around like a child molester.

If the proprieties were observed, he ought to eat his own gun, but if they brought back the public pillory, and folks were free to kick him in the junk all day from sunup to sundown for a week while he was locked in one, I'd want him to live just to enjoy the pain, and consider the many errors of his ways.

She should have gotten about 10 million in my opinion.

The San Antonio rookie PD was arrested and the 17 year old is still critical.
Simply eating his fweedom fwies in the parking lot as the donut molester opened fire.
The PD doesn't hire anyone with a triple digit IQ outside of detective.
Anyone affiliated with parasitical government is scum to be shunned.

And yet, he was vetted and trained before being turned loose, and no one from the Cheif to the academy noticed any problem.
It's a Christmas miracle: the Immaculate Deception.

Revoke sovereign immunity from his entire chain of command, and turn the family and the grand juries loose.

I'm three days late to this party, but your @1:19 comment covers everything I'd add.

This case/incident has taken THIS long!? The nurse earned the extra 0 on the check for the interest earned for being this patient for 'justice'.

I am not a Islamic apologist but there are some aspects of that religion that has some pluses. Like say this slimebag cop should be at the 50yrd line of a packed stadium for his personal stoning session.