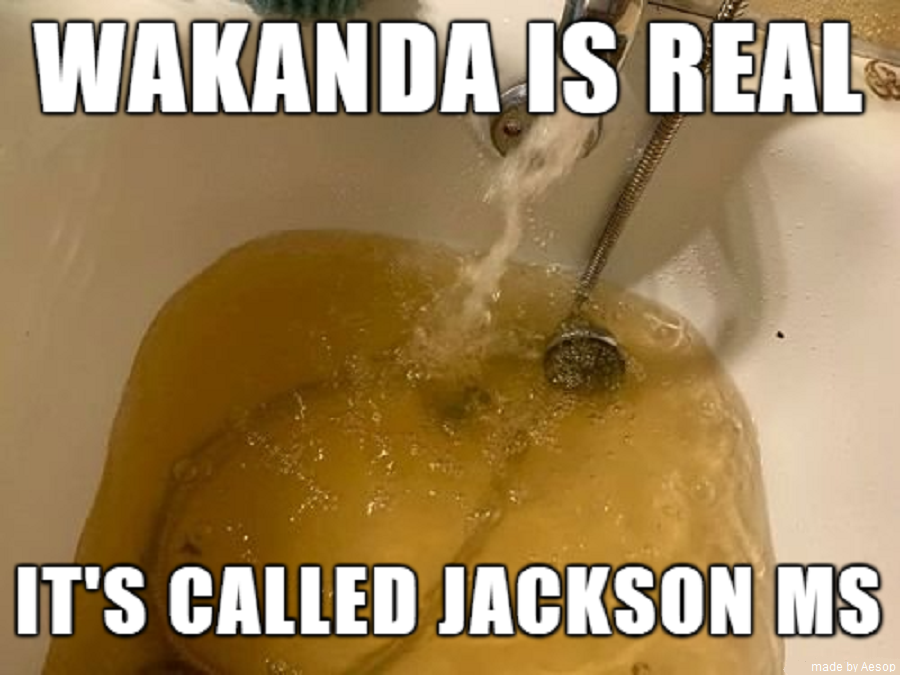 Not content with 40 years of residents eating shit every day after unbroken decades of Democrat rule, the all-black mayor and city leadership of Jackson MS has now made it certain that all residents can also drink shit 24/7, by cleverly eliminating any sewage treatment from sewage in the city before pumping it back into the city's tap water for all residents.

And, going straight to Page One of the Permanently Oppressed Playbook, it's all Whitey's fault, for moving the hell out years ago, and leaving Jackson's residents of color to literally stew in the shitstorm of their own creation.

Mayor Gibbsmedat is now holding out his hand waiting for state and federal handouts to fix the problem he and his fellow race-baiting incompetent grifting rent-seeker predecessors have spent decades creating.

The next step in city management may be to eliminate the middleman, and simply direct all Jackson residents to shit directly into their own beverage of choice, but the mayor's spokesholes haven't confirmed that part of the plan. Yet.

The problems in Jackson aren't because of one-color rule. It's because of lockstep voting for one-party rule. Get off the vote plantation, Jethro, and try voting in leadership that isn't incompetent communists. But I repeat myself. If you can produce George Washington Carver, Thomas Sowell, Morgan Freeman, Condoleeza Rice, and Ben Carson, you can find a black mayor who knows how to do his f**king job without claiming oppression rather than his own incompetence when the outhouse he threw the hand grenades into explodes in his face.

Whitey freed the slaves in 1865, and you had full civil rights every day since 1965. If you can't unfuck yourselves after 50+ years, it ain't Whitey's fault. Look in a mirror, FFS. You've elected idiots, over and over and over again, because you were checking their race box rather than their IQ or ideology. Own that.

And maybe ship your oppressed black Democommunists back to Africa. The IQ of both continents would increase markedly, and you'd get a lot less shit in your tap water.

Labels: communism is never having anything, Wakanda Is A Comic Book Fairytale

Funny that. My former neighbor/engineer who specializes in city water infrastructure was in Jackson this week. We check in with each other often. He texted me yesterday, saying he was in Jackson. I told him he better get that water back on line so he can leave before the chimp out.

Morgan Freeman is an actor. A talented actor with a great voice, whose work I have admired for 50 years, but just an actor. He is neither a genius nor a saint. He is, however, firmly of and for the Left.

I went home to Mississippi in 2018. My family lives out by the Jackson Airport. All he nice places that used to be in Jackson got diversity and are unrecognizable now.

I asked my sister if she had water and she said it was fine across the river in Rankin County where we live. She didn't even know there was a problem til she saw the news on CNN. All the White Supremacy moved out to Madison-Ridgeland in the nineties.

Mayor Lumumba's father was also mayor. Lumumba Senior also Vice-president of The Republic of New Africa which was supposed to have built an independent black nation out of the old West Florida territory. Their plans ended in a shootout that killed a cop in 1971.

They got their Republic of New Africa in Jackson. We see that such a thing ends up just like Republics in Old Africa.

"and try voting in leadership that isn't incompetent communists" One nit to pick; "Representatives" not "leadership". They are NOT our "leaders" and it would seem most are not very "representative" either. Maybe one day that will be rectified.

As we say in Louisiana:
"Thank God for Mississippi, so we don't have to be last in everything meaningful."

Maybe it's because of our western border with Texas, so that a little bit of reason/sanity/competence seeps across Toledo Bend and the Sabine River.

Jackson MS is legendary in their levels of civic incompetence. The individuals with IQs above of 83(all colors, not just "whites") moved to the 'burbs and bedroom communities decades ago.

In Louisiana, New Orleans mayor LaToya 'The Destroya' Cantrell may be a race-baiting far-left loonie-toon, but she at least is smart enough to hire some engineers to keep the sewage plants running.

You paint with far too broad a brush.
"Just" an actor was elected governor, then president once upon a time.
Freeman has consistently avoided the chip on his shoulder bullshit of his far lesser peers, as has Denzel.
They're not only talented, but hard-working, something most people outside the industry have no idea about. Sixty-hour work weeks, not counting prep and rehearsals, are average. And every "overnight success" usually has notched up 10-15 years of work to get there.
Genius? IDK. I have a feeling if doing acting well was easy, everyone would be trying it. Much like the auditions for AGT, 99% of people suck at it. Including most of the ones within the industry. The reality is that just like running companies or hitting home runs, the people at the top of the heap get there for a reason, and it has to do more with intelligence, hard work, and helluva lot more determination and guts than most people are willing to put out, than it does to talent, luck, connections, or pigmentation.
There are certainly plenty of stupid actors. The fact that you don't see Freeman as the face or mouth of a lot of woketard idiocy selects him right out of that category.
So whatsay let's allow that when I put together a post, I didn't throw darts at a board to pick names, and that there's a reason I didn't use Ophrah, Whoopi, Danny Glover, or ten other woketarded @$$holes.

Morgan Freeman is what center to center-left Democrats USED to be.

His interview with Don Lemon is one for the ages.

Wakanda?! OMG- you are on fire!! I love the comparison. Take any well run city, put People of Color in charge whose only agenda is a big salary, a job for the sister/mother/auntie at Public Expense, add plenty of gimmethats, and poof! In no time at all-WAKANDA!

I have throw it 100% behind you on this one Aesop and I live here but on the GOM Biloxi,MS.I and some co-workers(black) were talking the problem's of Jackson the other night they said stay the hell away even in the day time a frigg'en cesspool.