How To Get What You Don't Want 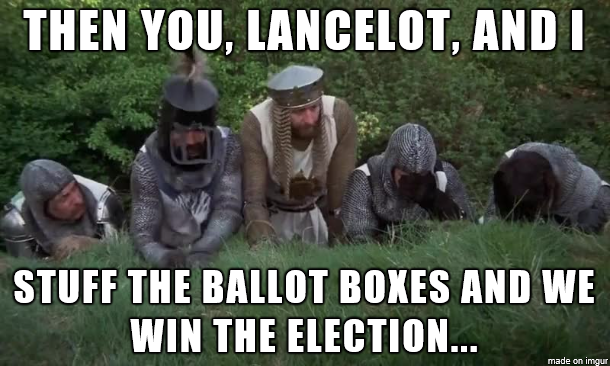 The courts and the legal process grind slow. I get that.
But when you're robbed, it's not so much the loss of the cash in your wallet that pisses you off.
It's the unmitigated pain in the ass of having to replace every other damned thing, from driver's license to other IDs to credit and bank cards, and the loss of the irreplaceable things, mementos, photographs, phone numbers, addresses, etc.
For $40, some punk made you his bitch for days and weeks. And we, naturally, resent the hell out of that.
Election-stealing is like that.
Bad enough to actually try it - this time, clearly and overwhelmingly on an industrial, or even information-age scale* - it's the waiting for justice to (maybe) prevail that really offends. And the chance that even that will fail us.
What pissed people off most about communist socialism was the way they casually wasted your time, which is the stuff your LIFE is made of, standing in line, and various other Kafka-esque daily petty insults. Because you, the individual, had no intrinsic value to TPTB.
Whereas our own tradition is to send 10,000 people to search for one lost hiker or boater, because in our worldview, and the way we live our lives, every individual matters.
When Edmund Blackadder complains "We are like the private parts of the gods; they toy with us for their own amusement..." it's funny, because we all have the feeling that Life, the Universe, and Fate bitchslap us around for their own ends, and we are just a bunch of Barbie dolls in their effort. Whether by malicious design or sheer happenstance. We laugh, because we can't see behind the curtain, and it's just venting.
But when the same thing happens from mere mortals, whom we can see doing it, because they think they can, and are entitled to do it, it rankles the hell out of us.
And that's exactly what Leftardia has done with this attempted (so far) election theft: they have decided that we - every man Jack of us - are merely their private pawns, useful only for their amusement in their unending quest for ultimate power over every aspect of our lives, and over every living soul.
We know, from history time and again, exactly where those boxcars unload.
People have expressed the idea, more than once, that this will lead to conflict.
It WILL.
Which outcome was, I gathered, rather the entire point of the Left doing it.
They think they can win such a contest.
The solution to that isn't to clutch our pearls, but rather to give them precisely that existential life-and-death struggle, in spades, and end the problem for at least a generation, if not far longer.
America with 200M people instead of 330M isn't all bad, and would be vastly preferable to one with the morons in charge, unrestrained by anything like reason, morality, or the rule of law.
If they really want Rule 308, it's high time they got what they wanted, and in haste.
I'll settle for a favorable and correct series of court decisions for now, but like the series of compromises made in the US Congress in the early 1800s, that merely postpones the central question necessitating the underlying looming civil war, until technology and the resultant conflict becomes more toxic and lethal.
It's just kicking that can down the road a couple years or so.
Let's lance this boil now, so we don't have to do amputations later on. It's absolutely going to happen anyway. Not might any more, but will, because we've now seen that there is absolutely nothing they won't stoop to doing. There is no bottom to their perfidy, amorality, and soullessness. You cannot negotiate with sociopaths. So the only open question is how soon.
I'd rather take it on while we have the strength to prevail, and the will to do so. The recidivism of the other side is beyond argument, and only holding their heads under water until they stop kicking is going to cure them of the habit, at this point.
Their desire for totalitarianism is like rabies. The only cure for that is a bullet to the head.
Time to start medicating. 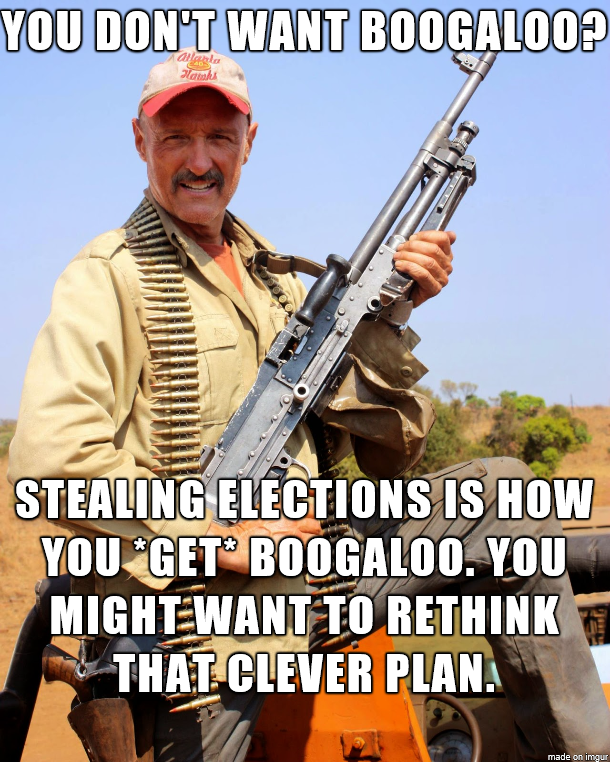 As I was researching (for a post a few months back, it's one of my personal favorites, but it didn't get the resonance I was thinking it would) the Red Brigades. What I wanted to get at was to understand, finally and completely, the mindset of the Left. If you're interested I'll toss you the link.

Anyway, the main underlying thing that every (and I mean every) case of Leftism is built on a religious fervor to burn the world to cleanse it. Destroy everything, put a bullet in every single person who isn't hardcore Leftist.

They do this, at their core, because they hate themselves. They look in the mirror and hate what they see. They turn this outward to the world, and want to burn it.

BTW the ad that came with that link was almost better than the clip!!

We are witnessing the chaos the socialist said they were going to do with the election.
This is another slight of hand card trick that will fail. The arrogant socialist didn't expect or consider the blow back they are receiving.
As usual, they thought the multitude of appeasing conservatives would whine and cry a bit, then roll over.
This is not happening. They have continuously, and intentionally provoked a sleeping giant who is really pissed off. A giant who will not be placated with the banal lectures of reconciliation, healing and unity.
A giant who will adamantly refuse the usurpation our remaining rights.
A giant who will not be told how to live, what to do, when and where to go by any occupant of the White House.
A giant who will not tolerate an unjust legal system that is incapable of protecting the innocent while criminals remain unpunished.
Beware the wrath of patient men who just want to be left the fuck alone.

John (and others),
Here's a link to an essay by Gary Saul Morson, a red diaper baby whose parents stuck with Communism after he defected. He explains the psyche of Leninism. Good read. We are the new Kulaks.

"One could almost say that force had a mystical attraction for Lenin. He had workers drafted into a labor army where any shirking or lateness was punished by sentence to a concentration camp. Yes, Bolsheviks used the term concentration camp from the start, and did so with pride. Until economic collapse forced Lenin to adopt the New Economic Policy, he demanded that grain not be purchased from peasants but requisitioned at gunpoint. Naturally, peasants—Lenin called recalcitrant peasants “kulaks”—rebelled all over Russia."

once this is sorted out, I have a great idea for the assholes in .gov who apparently need a lesson in who their employers are - "we the people" - and we are not pleased with their job performance...
Timeclocks. Just like so many of 'us' need to hit every day, to avoid the 'counseling for attendance'. We need a national referendum to make each and every one of these employees PUNCH THE TIMECLOCK EVERY DAY when they get to the Capitol, then clock out at lunch and break, then clock out at the end of the day - or, be ready to sit down at a town hall meeting with their constituency, for the "counseling for attendance". We could even discuss job performance at that meeting... I want those fuckers to be perfectly clear in their understanding of just WHO the Boss is - and it isn't any of 'them'. We can even approve - or not - their off days, holidays, and vacation requests. Should their attendance or job performance be found to be below required standards - good bye and good riddance. No "waiting to be voted out", oh no... if you suck at your job, you're fired - period. And the timecard for every one of the fuckers is available online for everyone to see.
If, as an essential worker in my mid 60s with type 1 diabetes; I'm working 50+ hours a week - check my timecard - I have to figure these fuckers can do it as well.