Of Why The Sea Is Boiling Hot, And Whether Pigs Have Wings... 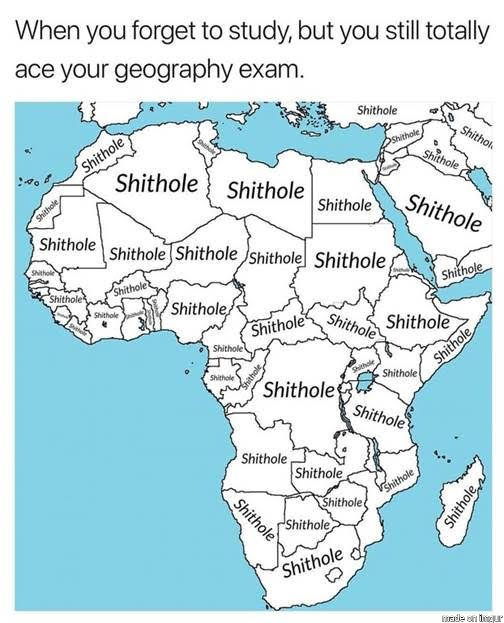 
(REALITY) Let’s state the obvious. Some countries are shitholes. To claim that this is racist is racist. They are not shitholes because of the color of the populace but because of bad ideas, corrupt governance, false religion, and broken culture. Further, most of the problems in these countries are generated at the top. Plenty of rank-and-file immigrants from such ruined venues ultimately make good Americans—witness those who came from 1840s potato-famine Ireland, a shithole if ever there was one! It takes caution and skill to separate the good from the bad.
For these very reasons, absurd immigration procedures like chain migration, lotteries, and unvetted entries are deeply destructive. They can lead to the sort of poor choices that create a Rotherham. Trump’s suggestions—to vet immigrants for pro-American ideas and skills that will help our country—are smart and reasonable and would clearly make the system better if implemented.
So, when it comes to the Great Shithole Controversy of 2018, my feeling is: I do not care, not even a little. I’m sorry that it takes someone like Trump to break the spell of silence the Left is forever weaving around us. I wish a man like Ronald Reagan would come along and accomplish the same thing with more wit and grace. But that was another culture. History deals the cards it deals; we just play them. Trump is what we’ve got.
For all the bad language, for all the loose talk, I would rather hear a man speak as a man without fear of the Nurse Ratcheds in the press and the academy than have him neutered and gagged by a system of good manners that has been misused as a form of oppression. Better impoliteness than silence. Better crudeness than lies.
We have seen the effect of uncontrolled immigration on Europe. It is very, very bad. The fact is: some countries are shitholes. I don’t want this to become one of them.

RTWT.
Two minutes of your life well-spent.
Posted by Aesop at 12:06 AM

I would amend that slightly and add that I don't care where a moslim of any color comes from but I do not want them here. That's where my line is. islam is totally incompatible with our civil society. Everywhere you look at countries that have increasing moslim populations(France, Sweden, Germany...) you have really serious violent crime increases as well as fucked terrorism.

Allowing 100s of 1,000s of moslims to emigrate here is exactly like injecting yourself with cancer and hoping for a good outcome.

Singapore is certainly an advanced, modern country, let them take moslims that feel the need to relocate(yeah watch how that'll fly). islam is more or less the religion there.

Finally, Andrew, I fucking get it, you wish we had someone with Trump's personality, character and experience as well his total disregard of PC but was just...nicer, so you can quit with your virtue signaling. Most of us are quite happy if not ecstatic with President Trump.

Singapore has a significant Muslim population, along with Indians and Whites. They all conform to the majority Han. A well behaved lot they are too. The ones that don't behave are imprisoned, beaten and/or hung. Seems to work well. My favorite city. No crime, no cops and no shit in the streets, unlike every other country around there, stretching north to Japan and west to, well forever.
I'm not sure on immigration other than it's highly controlled as are a few other stable countries, namely Bermuda and Monaco, Japan.
I'm fairly confident that once the immigrants from Muslim and other shithole countries get to a critical mass and start killing snowflakes in reasonable numbers, the ancient and noble tradition of Europeans kicking foreign ass will come forward and things will get interesting. Lets not forget it took 6 million casualties before Jews got their act together.

Concur on Singapore being a nice, clean well run place, least when I was last there a generation ago. I would also contend that Botswana is unworthy of being written off as a shithole. If there is one place on the continent worth support for potential redemption it is Botswana. Again my experience is somewhat dated but I've not seen anything contrary from casual research.
Boat Guy

This isn't a Muslim issue.

let me ask y'all is Singapore the future you want for the US? A nearly childless authoritarian corporatist state. No thanks

The reason for this being is very simple. Diversity

As Mr. Lee the founder of modern Singapore noted

His solution was basically a one party state

The Founding Father John Jay understood this in the Federalist Papers

With equal pleasure I have as often taken notice, that Providence has been pleased to give us this one connected country to one united people -a people descended from the same ancestors, speaking the same language, professing the same religion, attached to the same principles of government, very similar in their manners and customs,

Well as soon as diversity, in the last case a plethora of European "White" groups within a short time F.D.R.

That kind of authoritarian leader was what a great many people expected and wanted and would vote for.

The current bloated state was caused by a diverse group of White people, people with very differing ideas on the size and function of the State, on faith and so on. It was natural and inevitable and note not the fault if any of the current newcomers Mexicans or Chinese Muslims or anyone else including Jews

Basically allowing in anyone including slaves other than Protestant Anglos screwed the pooch on the union as the Founding fathers intended . It was done before its started

Now if can get everyone here back on a close page well we won't get the old system, it failed centuries ago but we can restore a system worth giving to our descendants .

This is the challenge, one people with one vision.

Until the Left gets its ass kicked and immigration is stabilized and stopped and preferably reversed it will never happen though,

Oh and a last point while I am ranting, you can't run or hide either, There is no frontier and baring a mass die-back there never will be one. You can't run to Monticello either. The US is fully developed, You have no choice but to fight or lose

Right now words and ideas. use them, make them