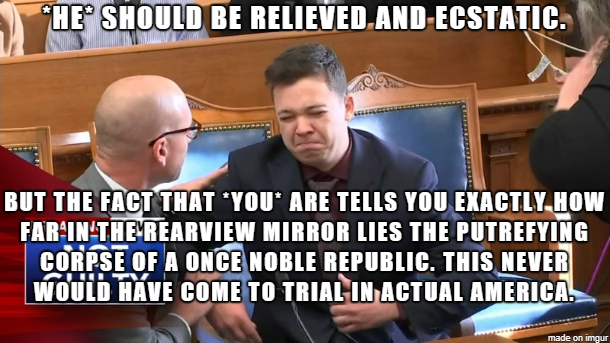 The cold, hard fact of the matter is that the verdict in the Rittenhouse trial should leave anyone paying attention with the same feeling they would have had on the Promenade Deck of RMS Titanic early one cold April morning if they'd discovered the lifeboat davits were still operating.

Pardon me for not getting all misty-eyed nor ebullient over that.

The fact that there was even a trial in the first place means you don't have enough food, ammunition, or hard-assed and like-minded friends lined up for what's yet to come.

Perhaps work on that, if you please.

When the prosecutors in this misbegotten abortion are in prison after being disbarred, the Kenosha mayor and do-nothing police have all been fired, and the WI State police are rounding up all the rioters and charging them directly with the arson and other felonies that occurred in Kenosha, give a holler. Not before.

And when the SOP in any future riot anywhere in the country is that the looters, vandals, and arsonists therein will be shot on sight until the nonsense ends, and en masse if necessary, then you might begin to think you had a functional country again, with its collective head screwed on straight.

Coffee break's over; back on your heads.
Posted by Aesop at 12:57 AM

Labels: Banana Republic, reality slapping you in the back of the head

Agreed with this caveat. We need to at least momentarily really enjoy this moment, this one battle, because it should give us some little kick in the ass, some jolt of "OK fuck these people we have to do whatever we can, daily, locally, to win victories like this". Yeah in the olden days you're right, should never have gone to trial. Well it aint the old days we need get used to it ( and change it back.) But like I said, its a good day today..
https://coldfury.com/bustednuckles/wordpress/wp-content/uploads/2021/11/T97D2mKXtuQZKMKc.mp4

Last night, my brother came for a visit. He was all a'tizzy the kid was acquitted. I said, yeah that's great , but it's kinda sad too. Here we are, I said, all happy cuz a friggin' kid did what our proxies were supposed to do, what 'we're' supposed to do, and we're relieved cuz TPTB couldn't punish him for it. I ain't seein' no great victory here, I said. My brother left a bit deflated.

Watching Leviathan take a fastball to the junk is fun, but it neither enriches me nor makes my tasks any easier, except for the briefest of smiles. When I think about how bad it is that this even happened to begin with, even that smile fades in an instant. Had there been 2000 Rittenhouses, and they'd killed the entire mob that week, that might be a reason to partake in rejoicing. Epicaricacy is ephemerally entertaining, but not productive.

Yep, this is the truth. I'm thankful that justice finally prevailed in this case, but the fact that was even a question seriously bothers me. American citizens are still being held in DC jails for Jan 6th without being charged, while being held in deplorable conditions. We are so far down the rabbit hole, a brief respite of fresh air doesn't change much.

I'm glad that Kyle was acquitted, however it's not enough, not nearly enough. Freedom is barely on life support in the US, the November coup and the passive reactions to it from the Republican party was a watershed moment, Here and there vestiges of the old Republic still exists for now. However the the Shits and Giggles Junta will not just sit by and accept their defeats.

The acquittal was a small, wonderful, tactical win, and in that sense, we may want to consider using these small wins as morale builders for the despondent on our side (and they are legion).

Anything that makes the communists howl is fine with me.

I agree it's an outrage that this case even went to trial, and highly disappointing that the initial body count wasn't higher.

But I will say this: the Left wanted his scalp really, really badly. They wanted to send a message that anyone who stood up to Antifa would be not just made to suffer, but wind up in prison. And they lost on that. Not just "only got two-thirds of what they wanted," they were unequivocally rejected by a jury. If that's not worth smiling about, I don't know what is.

And I will be very surprised if the media/Big Tech companies who tried to crush KR don't face a civil suit in the immediate future.

But only b/c Soros and his minions haven't taken over Kenosha yet.

Wonder if Soros will make that mistake again. Soros will only bear down harder now.

We see on display sheer ignorance with the anger over the aquittal with people utterly disconnected from reality from the worthless antifa supporters all the way up to the white house. They are legion currently and that's the problem. It's not that there's 5 or 10% of the population that is so disconnected from reality or basic logic IE, you can defend yourself or your property and it's not crazy to do so. IT's the fact it appears it is nearly half of the population that thinks this way. Couple this with the fact that much of this population infests the courts, the police, the military, obviously media, hollywood and politics and yeah, I sure as hell agree that one kid getting justice is not a cause for great joy. The fact there is video evidence that -clearly- shows what happened and that there -never- should have been a trial at all shows how bad the disassocation from reality far too many people live. Also for all of you out there, this is a very rare case where nearly every action was recorded and on public display. Most cases of self defense are not so recorded from so many different angles. That's the storm that's coming. Think that group of people who I'd bet nearly none of them have more than a couple days of food in their house won't think twice about showing up at your door demanding your food because of what they deem to be fair, nevermind them having any personal responsiblilty at all?

The left wants his scalp really bad, and totally ignore the fact that each of the persons shot had served time for criminal offenses including offenses against children. These 3 were just a part of the antifa SA.

George fuckin' Soros... why he still sucks oxygen is a mystery to me. I guess there is no high perch within say... 600 yards from his residence.
Approximately.
Original Grandpa

Beg to differ; trial didn't go "like it SHOULD have" because there never should have been one in the first place. In a just republic, young Kyle would have received an "attaboy" and had his ammo replaced.
Boat Guy

"Think that group of people who I'd bet nearly none of them have more than a couple days of food in their house won't think twice about showing up at your door demanding your food because of what they deem to be fair, nevermind them having any personal responsiblilty at all?"

By the time we reach that point, the shooting will have already started. At least out here in the hinterlands, where thousands of 12 and 13 year olds take their first deer every season.

Do what needs to be done.

When we become uncontrollable, then we begin to take it back.

The tears from the Left are so thick you could get rich mining the salt from them.

Dear wiseass,
The @$$clowns who tried that got popped for disturbing the peace, and filming without a valid permit, and were awarded six months' suspended sentence and probation provided no new offences for three years' time inside city limits, $750 fines apiece, and their cameras and recording equipment, including phones, (about $2K) were seized and forfeit. They haven't been back since, and that's also why their video of the incident never saw the light of day. So they succeeded in filming no one that day. Problem solved.

If they'd contented themselves with not bothering anyone and filming from out of the way, rather than illegally impeding and outright blocking public entrance to federal property, or obtained a valid permit to film within city limits, they might not have had the world fall on them with both feet. City hall was not amused. The postal inspector was standing by to make it a federal case, but was satisfied with the city's response.

As the judge informed them is so many words, the First Amendment isn't a blank check license for public jackassery, and they were told they were also not allowed to yell "Fire!" in a crowded movie theater. First Amendment Check Achievement: unlocked.
Their attorney told them to STFU and take their lumps.

So it turns out annoying postal customers conducting private business over the holidays isn't the same thing as filming a bona fide riot on city streets. Who'da thunk it?

Thanks for playing, and we have some lovely parting gifts for you.

It seems pretty clear that the prosecution of Rittenhouse was a threat to any who might resist the Democratic/Progressive mob. There was no chance that the case would fly with a "reasonable" jury but the time and expense would savage most mortals without outside help. The Leftists obviously believe that no individual has the right of self-defense, especially when the attacker is one of the Leftist/Democratic mobs conducting a "righteous" action. I suspect that the Democratic Authorites would also have prosecuted anyone who shot an intruder who had broken into their home and was attacking their family. A "conviction" was not necessary to make that clear.

In the eyes of the Progressives, you have no right to any self-defense that endangers the life of the attacker. Any act of self-defense will be characterized by them as the defense of mere property or the avoidance of a trivial beating, which prevented the "misbehaving" attacker the opportunity to "turn his life around". The outcome for you, and yours, is irrelevant to them.

Rittenhouse seems to have gotten a "reasonable" jury. Don't expect a Leftist/Democratic/Progressive Prosecutor to make that mistake again.