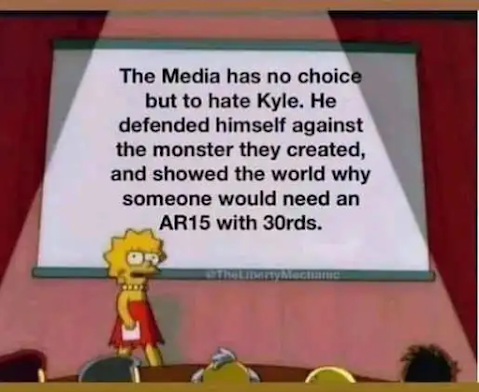 Always wear gloves when handling filthy metals like brass, copper and lead. You wouldn't want to get that stuff on your fingerprints.

I posted this elsewhere earlier today. Thought it might be fitting for this crowd (edited slightly).

I’m especially looking forward to his suit against Joe Buydem for slander with the “white supremacist” label. If I was Kyle, I’d settle the monetary damages against Buydem for a public apology, on live TV, with Kyle’s final approval of the text and specify no deviation during the delivery from his knees.

As to the MSM, Kyle will make Nick Sandmann look like a pauper. I also hope he sues people like Joyless Reid, Fredo Cuomo and Don Lemon, personally, into oblivion. Who knows, maybe he’ll end up owning ABCCBSCNNNBCNPR and WAPONYTLATCHITRIB (I think you get my drift, every MSM outlet) and on his first day at the helm, fires every stinking liberal on the publishing, editorial and reporting staffs, in other words, all of those POS libs. That’s a nice thought anyway.

The Left and .gov thought they were going to get a slam dunk that could be turned into a major push for gun confiscation. Instead, they got their asses handed to them and had the charges stuck where the sun don’t shine with a running, rusty, chain saw by a jury of Kyle’s peers, in the face of massive intimidation by the MSM, BLM and Antifa.

The other nice outcome is the prosecutor’s political career is OVER.

What is best in life? “To crush your enemies — See them driven before you, and to hear the lamentation of their women!" and to hear and see the massive flood of liberal tears at a just verdict.

The only thing these POS liberals understand is getting their asses kicked good and hard and suffering massive monetary damage until either the message sinks in or they suffocate while wearing their assholes up over their ears.

Kyle's problem is he wasn't afraid enough...all those people chasing him were legitimate targets...he was too gentle.

Root word of "liberal" is liberty. And these leftists are ANYTHING but pro-liberty.

Dammit McChuck now I have to reload all those mags.