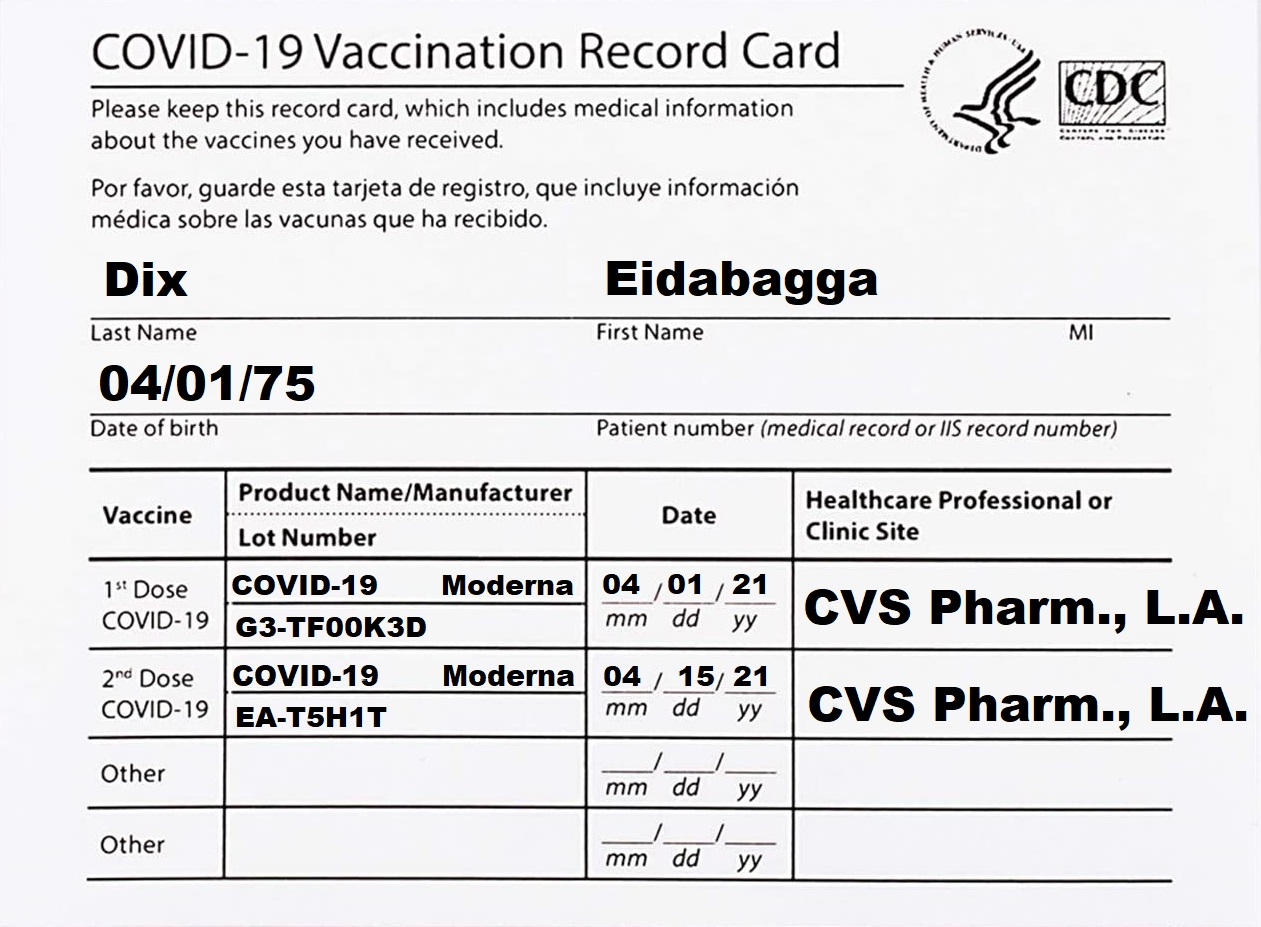 We hear some overzealous jackholes may be requiring proof of one getting vaxxed with an experimental set of vaccines with some pretty firm negatives running against them, for a non-zero number of people, just to be treated like first-class citizens in public again.

No sale, bucko. To quote no less an authority than Toni Basil,

We're not anti-vaxxers hereabouts, in any way whatsoever, as any number of left-handed backhands over the years to "Dr." Jenny McCarthy's egregious insanity would attest.

That doesn't apply for something wherein you are a lab rat beta-tester for Big Pharma, which has been immunized from lawsuits, with no recourse left you in case of adverse reactions, up to and including death.

On the other hand...

It's a big internet. If someone(s) were to take the above example of a mostly accurate but thoroughly spurious vaxx card (which we may or may not possess, to flash at any officious @$$hole who prods us for it, and which card, nota bene, is every bit as legitimate as voter registrations and ballot counting in Detroit, Philadelphia, Phoenix, Atlanta, Madison, and Las Vegas), and they put their own "information" in the blocks above, well, we wouldn't encourage that, and it might get you into trouble. But we'd have no way to stop them, would we...?

So please, don't do anything bad. 'kay?

(BTW, I think I've just hit upon my next telephone listing, if I ever get a published number again.)

You HAVE seen Dean Ing and his wife's listing, right??

So fake the Tyrants out eh? Give them the papers they demand for free passage and employment eh?

I wonder how that worked out for Annie Frank and her family? In the short term not that badly, until they were Turned In by some LAW ABIDING SOUL.

I wonder if they will establish that national database of shots give and "Booster Shots" and thus your employer will KNOW if your "Papers" are fake like the many illegal's that work under fake papers even today?

Quite a change from killing tyrants eh? And I was wondering how you were going to keep from killing the Hospital Administrator as a "tyrant" that was simply passing on orders from some faceless apparatchik in the Fortified DC.

From the Godfather It's not personal, Sonny. It's strictly business.

I know MY Hospital gets a LOT of our operating funding from the state and local government and thus THEY can withhold those funds IF we are not "Fully Compliant" to whatever recent ruling from DC's faceless apparatchik's. I bet yours does too?

Thus the Hospital Administrator has to pass on the bad news of a "Neu Requirement" with proof of "Compliance" if the Hospital as a Business gets to keep their funding's.

Is he a Tyrant or the faceless ones in DC that give the orders?

Trouble is coming (Hell some SMALL PART of it is HERE), until things get SO BAD that the average Joe is Hungry and enraged probably by the Media Propaganda against ANYBODY except the Government as to aim that hate somewhere the Government deems "Safe".

Don't worry guys it's coming, Hell is coming for breakfast.

Don't forget the back

Anyone know what kind of card stock these are printed on? Asking for a friend, thanks.

Be a shame if someone posted the card/paper type and card size for one of those.

Both the back side, and the actual dimensions, are freely available in hundreds of places on the 'net, including multiple official state health department websites, who want you to print these out yourself. Standard white cardstock works fine.

Joe Average doesn't labor under the same burden as hospital workers. For them, it's Eidabagga Dix to the rescue.

If my employer makes different requirements for me, I'll simply tell them to get f**ked, and they can learn to live with disappointment, and/or sue them for privacy violations and wrongful termination if necessary. Heads I win, tails I lose, and it's a fool's wager to risk a lawsuit they'll eat sh*t on, over an experimental and potentially lethal vaccine that was not a condition of employment, for a virus which is rapidly falling off the map.

Ask me my vaccine status, go ahead. I will ask you for your HIV, STD, Hepatitis A,B,C, herpes, genital warts, tuberculosis, drug addiction, alcoholism, mental illness, and anything else that comes to mind "STATUS". Because my personal health and safety.

TRANSVAXXITE:
A person who identifies as having been vaccinated even though they haven't been.
Exemple: I've decided I'm a transvaxxite. Vaccination is a spectrum and you are a racist and bigot and mean if you don't accept me for who I am.

I FEEL vaccinated, therefore I am.

There's a version out there that even has changed the "official" government seals with less than official versions so you're not technically breaking that law.

Not that I would encourage that sort of thing.