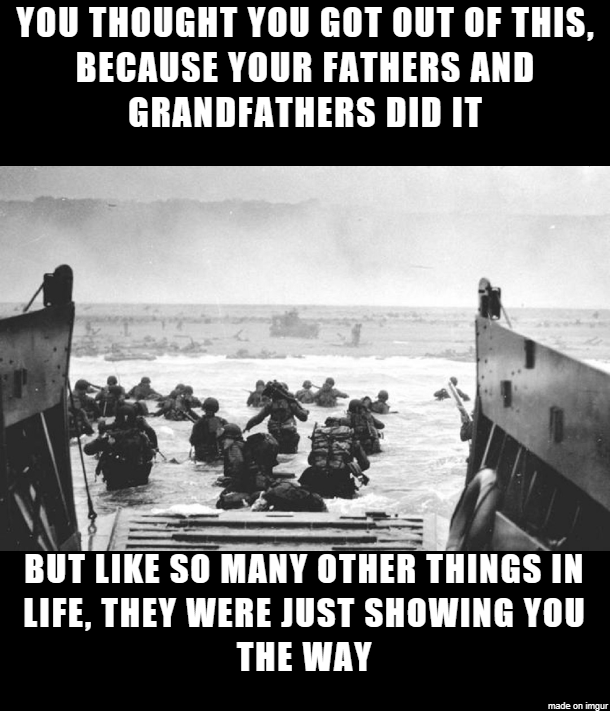 John Wilder has some thoughts on the occasion for this weekend's holiday.

We commend it to your reading.

I'm afraid that was the essay for last Memorial Day weekend.

SCOTUS voted last January that the Constitution doesn't apply to America. It's too late to take that move back (short of ritual seppuku by at least five of the bastards, a consummation devoutly to be wished).

The Constitution is as dead as canned tuna.

All that's left now is the smell when you open the can.

We don't have to talk about sacrifices on foreign shores with foreign names.

Pointe du Hoc is coming to your town and mine.

For some people's towns (Portland...Seattle...Minneapolis...Chicongo...etc.), it's already there.

The only question left for actual Americans is whether they're willing to Ranger up, and hit the beach.

And while I'm up, let's don't sell out those second-gen Americans quite so fast.

While mom's side of the family goes back to the 1600s on this continent, with a pedigree that'd impress the bluest blue-nosed New England snob, dad's parents were both off-the-boat Ellis Island graduates: granddad from Ireland, and grandma from Germany. Around the turn of the last century. Both dead before I was born.

Dad was the first generation of his family native-born American.

There are Americans everywhere. Even now. Some of them just weren't born here.

We used to be choosey and select them out from amongst the rotten fruit of the grifters just looking to make a buck off the rest of us without working for it. (And no, paying a coyote and bussing tables is not "working for it". Ever.) They'll never be Americans if they live here for centuries. They're simply Turd World hobos from Shitholia and Trashcanistan, who never "got" America, and never will. Thieves sneak over the fence. Honest people come in the front door. And they knock first, and ask permission. And every legal immigrant knows that in their bones too. Illegals should get one second chance after deportation. Second offense should be a lifetime ban from ever legally residing here, for any reason, including tourism. Three such offenses should be life imprisonment at hard labor. And repatriation of your remains when you died, back to Shitholia or Trashcanistan.

Half of this country, including those born here who should know better, wants to destroy America, even the very idea of it.

Life imprisoned at hard labor, and repatriation of their remains to outside the territorial limit off the coast seems a fitting end for them, too. With no marker, and removal from all records, as if they never existed. Let's call it "retroactive abortion".

Our country: Our choice, right?

Make that executive order #1 of a future Aesop administration.

Because we don't select emperors in this country.

And we've seen what being without one of those for just over four months has gotten us. It only gets worse from here.

Loosen your packs and helmets, and don't bunch up.

We're about to hit the beach.

Ready or not, whether you wanted to or not.

I REALLY don't want to do this again, but if it comes to it, I'm ready to go.

Sadly (for me anyway) while I would like my version of reason triumphing, I fear it will much more likely be yours. That said, I will endeavor to do what is needed when the time comes.

there was an old tv show back in the 70s I think called Love American Style, a really wretched program. But they had a skit where a women comes home and finds her husband in bed with another woman, and when she confronted him about it, he simply said what, who? As the other woman and he got dressed and she left, the end of the skit the wife was so gaslighted that she believed that her lying eyes deceived her.
That is what the stolen election was kike, everyone who objected to it was ignored as if it didn't happen,
The last four or so months habe been an utter disaster and they are also ignoring that.

Memorial Day this year is really going to be a sad one, especially for those of us who are in Goldstar families.

My father was a casualty of the Korean War, fight the commies over there so we wouldn't have to fight them over here is how they put it, and here I watch as cowards, Quislings and traitors allow a soft communist coup over the country. Fronted by the vilest cretin that has ever slithered through the corridors of DC, worse than even his boss, because unlike Obama who sold the country out because he hates us, and because he is a Islamic supremacist, Biden sold the country out for financial gain. And to avoid criminal charges related to his craven greed

You're right. The tense is wrong.