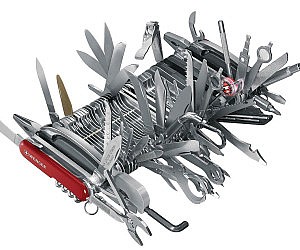 We return to the topic of generalization and specialization.

Because of another one from Wilder's blog. RTWT.

We'll be here when you finish.

Just, please, not in the same job. (I want the guy flying my plane, for instance, to be Jimmy Stewart, not Hardy Kruger nor Richard Attenborough. Especially in Flight Of The Phoenix.)

But my point remains that Heinlein was talking out his fourth point of contact, even as he wrote that bit about "Every human being should...". And he knew it when he wrote it. It was sociologically and entomologically a load of codswallop, from start to finish.

But JW's idea about everyone rewriting it for themselves? Genius.

My riff off of this one will probably be my own Notebooks Of Lazarus long - Aesop version.

Every human being should be able to swim a river, cross a river, make a target, shell a target, storm a beach, surf a beach, comb a beach, cause bleeding, stop bleeding, make a baby, deliver a baby, feed a baby, build a boat, sink a boat, salvage a boat, build a building, tear a building down, teach a lesson, learn a lesson, make money, save money, spend money, use language, speak another language, play an instrument, shovel bullsh*t, detect bullsh*t, win an election, subvert an election, lead people, follow people, ignore people, do the math, ignore the math, start a heart, stop a heart, know what matters, when it matters, why it matters, and when nothing matters.

Specialization is for everyone.*

And if I'm making a list of things that "Every human being should...", in order to bank the fires of civilization in darker times (which always curiously takes the form of setting fire to banks and living in the dark - weird, huh?) it wouldn't look anything like Heinlein's list. And he knew that too.

Or you're going to be a historical footnote.

And as I think of it, even his list wasn't that of a generalist; it was a list of things he could specialize in.

I have to wonder if Heinlein knew that too, and that knowledge was his Easter Egg Of Insight towards which he was leading the reader; or if he was actually that self-unaware.

*(For anybody interested, yes, I've done every one of those, and more, successfully, and far more, and as an adult. As have you too, in all likelihood.)

What an interesting thought exercise, Aesop. I read it this morning, have pondered it, read it again, and will ponder more.

I will say that while both generalists and specialists are needed, it is when and where they do the most good. As you suggest, one desires one's airline pilot or surgeon to be a specialist (and a darn good one). That said, the danger of specialists is that they are usually quite good in one thing, perhaps okay in two or three related skills, and rapidly go downhill from there.

One can have a society of specialists - we do - and things work swimmingly until something happens and all of a sudden one specialty disappears or no longer produces. We would be in a world of hurt if we lost programming skills in our technological society; we would also be in bad way without auto mechanics, just perhaps a little slower.

The knife picture is actually a great example. If you were a boy of a certain age in a certain time, you remember the thrill of seeing the official Swiss Army Knife in the case at the Jewelry store or sports store. And you got even more excited as you saw them with multiple attachments - would it not be cool to have a knife/saw/pliers/scissors/wrench/can opener/tire stem re-inserter in your pocket (last one made up, or course)?

And then you bought one. And suddenly realized your pocket was completely full, the knife was hard to get out, and the pieces really did not work as well as you thought. You had a saw - which could cut twigs. You had a scissors that short cut. You never opened a can in real life.

Suddenly, you realized all you needed was a knife. And maybe that magnifying glass. And the corkscrew with the tiny screwdriver in it. That was about it.

I am an unashamed generalist and Jack of All Trades. I know I will never attain the prestige (correctly and honorably earned) of the specialist, but it is seldom that I find myself completely without any idea of what to do in a situation.

Toird, and a P38 or John Wayne as some know it.

Acshully, except for being easy to lose, the tooth pick and tweezers are very handy. The saw is very sharp and I have used it to cut 1x2's in half for stakes, using the knife blade to sharpen them. And once, while on a roof repairing some aluminum flashing, I used the scissors to cut a couple of small pieces because I forgot to bring my tin snips up on the roof with me when I went up to inspect and figure out what was needed to do the job. I've also used the can opener to cut open my lunch.

You can do a lot with a multi-tool, but it will never work as fast or as well as the proper tool. Contrary wise, carrying around every proper tool just in case you need it isn't going to work.

At work I carry the specialized tools of my trade. I also have a multi-tool, because shit happens.

Mike - Fair point about the tooth pick and tweezers, although I apparently managed to lose them quickly enough to not have them be a factor.

You are correct, they all have uses - and can be used in the correct situation. My point, I suppose, was that for what I ended up doing, I did not need most of those. Just a knife (and the corkscrew, of course).

I never found use for the corkscrew, but then my choice in wine usually came with screw off caps, lol.

A graphic illustration of your point:

"(I want the guy flying my plane, for instance, to be Jimmy Stewart, not Hardy Kruger nor Richard Attenborough. Especially in Flight Of The Phoenix.)"

Note that the Hardy Kruger character ("Heinrich Dorfmann") also wanted Jimmy Stewart to pilot the improvised plane that he designed. Well, really, he wanted a better pilot ("The only thing outstanding about you, Mr. Towns, is your stupidity!"), but he knew he didn't want himself flying it.

I'm not sure that's my absolute favorite movie, but it's certainly among the finalists. There's a lot of success in the story. Hardy Kruger's design does fly. Jimmy Stewart does figure it out on the passenger-carrying "test flight." And Richard Attenborough does keep them from killing each other. A very encouraging movie.

I never even saw the recent remake. Those are almost always dreck.

Against the original cast, the remake would have to be dreck.

Note I didn't say I wanted Mr. Towns for my pilot.
I said I want Jimmy Stewart.
BGen, USAAF, 28 combat missions, and rated in everything from Piper Cubs to B-47s, AFAIK.

Those other guys I mentioned are just actors. :p

Excellent. Now I have to do mine.

Um, Peter?
That was my meme.
I made it for the response to the OP.
Nice of Blogspot to comandeer it. ;)