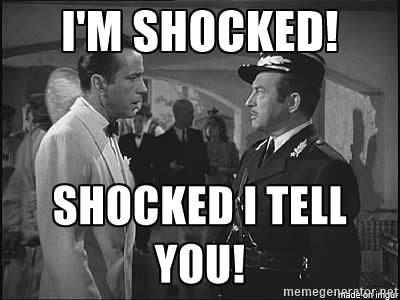 Gun, accessory, and ammunition sales, flagging and largely gone flat since President Trump's inaugural, are about to get a sharp jolt of adrenaline from the one-trick pony of congressional Dumbocrats:

Mordor On The Potomac—Senators Dianne Feinstein (D-Calif.), Chris Murphy (D-Conn.) and Richard Blumenthal (D-Conn.) today led a group of senators in introducing the Assault Weapons Ban of 2019, an updated bill to ban the sale, transfer, manufacture and importation of military-style assault weapons and high-capacity ammunition magazines.

Exemptions to bill:
Other provisions:


Maybe it never gets out of committee in the Senate, maybe it does.
(How many votes were there to confirm Kavanaugh...?)

Land office gun sales, ammo shortages, and record magazine purchases in 3, 2,...
Posted by Aesop at 8:53 AM

The firearms and ammo industry needed this sort of shot in the arm. Bravo, progs. They may be saving jobs and businesses.

Not too concerned doesn't apply to me. Sorry, gotta go; need to go to the MagPul site.
BG

"Requires a background check on any future sale, trade or gifting of an assault weapon covered by the bill.

Prohibits the transfer of high-capacity ammunition magazines."
-------------------
So, let's say that this passes, and people actually decide to abide by it.

First, you have actual registration...and you just KNOW that it'll be expanded to ALL firearms within 5 years.

Second, so you leave your "assault rifle" to your kid or grandkid, but now all they have is an expensive club without the magazines.

Yeah, fuck that noise - ALL of it. I hope that these Deep State Tards sell 25 million guns because of it, and uncounted hundreds of thousands of 80% receivers...every year.

was reading a great story about the wandering serial number and the attack of the 60 foot heliarc monster put down with the durakote cannon.
Fascinating

Where in the Constitution does it give the federal government the power to make these laws? Every federal gun law, starting in 1934, is unconstitutional. But, hey, legislators gonna legislate. Drugs, guns, sugary soda, carbon emissions. Get ready, this is just the first draft.

It's in there, right next to the clause mandating abortion and sodomy as rights.

Yep. Starting already. Went over to SGAMMO.COM to order up some factory 147 & 124 grain, 9mm. Gone. Only a few days ago the ammo I wanted was in stock.

Feinswine is only a problem because the communists of her district keep her in power.

I'll be at the Greensboro, NC gun show in a couple of weeks. It'll be interesting to get some ground truth on the subject.

However all the guns and ammo in the world are useless if you can't figure out what you'd be willing to use them for and be willing to carry through no matter what the cost.

Hell the Democrats could switch to a no gun control platform, not damned likely I know, and still bury the US with immigration and Cultural Marxism and than stab gun owners in the back once they had enough political power.

And yes I know its not time blah blah, no one is saying it is and no one who is not an idiot or an agent provocateur is saying break the law however unless you and me know what we are willing to fight for you can have all the guns and ammo we can possibly store and we'll still be as useless as tits on a boar hog.

The question is not "how many more guns do I need" or "what kind of supplies/training/etc" do I need its not anywhere near there. Its what kind of country to live in or at least for my children to live in and what do I have to pay to get it

Perhaps we can use US Code to have all of the co-sponsors of this law impeached and removed from office? Section 242 of Title 18 makes it a crime for a person acting under color of any law to willfully deprive a person of a right or privilege protected by the Constitution or laws of the United States.