Out And About II 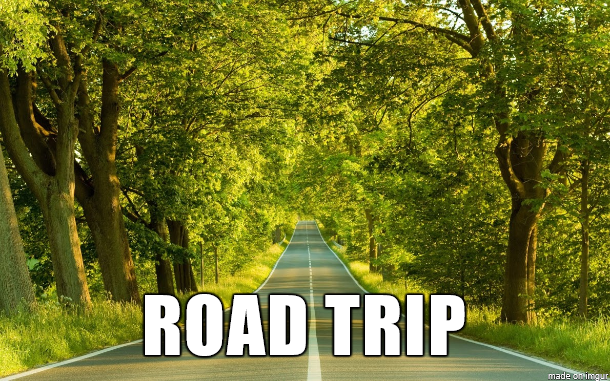 Last road trip I prudently rented a spiffy little car. What I saved on gas paid for the entire rental. Liked the car a lot. Turned out the agency sell-a-car division had one of the same make and model, with literally just a couple thousand miles on it, for sale at $7K under the sticker for the same car, new. Loaded, standard. Being as the agency was nice enough to eat high four figures of the depreciation and sell me a virtually new car, I couldn't pass it up. I'm cheap, but not stupid cheap.

What I save on gas the next few years is going to about half-pay the entire note on the car too. Given that it gets about 4X the MPG of the daily driver pickup I've been in since 2008, and commensurately, has a range about 200 miles greater on a tank of gas, with a gas tank 1/3rd the size, I've got some logistics to take care of from much farther afield.

Long-term logistics. (Not property; that's planned, and just wants the necessary cash to seal the deal.) And some new scenery after the first part of the year won't go amiss for a mental health break either.

The fact that I'll be spending less on gas for long trips than I was spending driving around town for a few days off is just icing on the cake.

And whether you like it or not, Kung Flu isn't a myth, and it's spreading just fine after Lockdown, as expected. About 3% of you are going to find that out firsthand in the worst way if you choose to ignore reality, but it's nominally a free country, so you got what you wanted, (and will continue to do so) like it or not. Or you can wear a mask out in the hoi polloi and wash your hands religiously, and never even notice the whole thing. Dealer's choice. It's still knocking off about 1K/day. Don't find out personally, hear? I can assure you it's not a pretty infection to fight. But given the other mega-whacktardery going on just north of Sanity hereabouts, time out in the world, and some prudent shopping trips, are a wee bit more necessary than continuing to blog the Retard Riots of 2020.

In fact, things are so weird overall I may have to plan a future trip to the periphery of Area 51, just to verify in person whether or not we're all living in a real-life episode of The Twilight Zone, being choreographed by our future alien overlords.

It couldn't possibly be much goofier than the spectacle being provided by the Leftist moron minions (but I repeat myself) currently driving the news cycle.

But at least you finally know what happened to all the kids who ate the paste, ran with scissors, and ended up in continuation school trying to get that GED, because public school was too hard.

A third of them are bong-toting radical Antifa morons, another third are media reporters and journalists, and the dumbest third are in politics, running the blue hives. You could look it up.

Just about like your mom and dad suspected when they told you couldn't hang around those idiot Doofus Family kids back in the day.

Blogging will therefore be light for the next several days, and return to normal towards the end of the week.

Stay safe, stock your larder deep and wide, and stay frosty. Entertain yourselves with those over in the right column, and always remember this important safety tip if the Summer Injustice Games of 2020 get a bit closer than you'd like: you can't get ballistics off of buck shot, and if they never find a body, it's really tough to prove a crime. And if you're not handily provided with multiple acres of contiguous desert like we are hereabouts, there isn't much that feral pigs and swamp gators in most of the rest of the country won't eat, given half a chance.

Be sure and drink your Ovaltine.
The chair is against the wall.

Safe travels and have fun out there. A change of scenery is always nice.

I had a similar experience. Last summer, I rented a Ford Fusion hybrid here in Phoenix for a quick two day trip to Las Vegas. The out the door cost was $25 per day for two days, so $50 total. This car got 50 mpg, so I used a total of 12 or 13 gallons of gas round trip. My pickup truck gets 20 mpg, so the money I saved on fuel literally paid for the entire rental. So in other words, the rental was effectively FREE. And it was a very nice, quiet, and comfortable drive in the car.

Jean has a long mustache

I wonder how many got the chair reference.

My old lady was eyeballing the rental car sales. Apparently Hertz is liquidating and I could score a decent SUV on the cheap.

But I don't want one. My current one is fine, and nearly paid off.

Still, they appear to have some deals.

"you can't get ballistics off of buck shot"
For medical reasons, a friend can't take the G-forces of a 12-gauge. .223 fragments like shot, yes?
I'm guessing .308 not so much, no?
Enjoy your new ride, Aesop.
I'm really gettin' tired of living in interesting times...

Anyone contemplating spicytime, should read this short article all the way thru.

Lore-Elisabeth Blumenthal, 33, faces two counts of felony arson for her role in setting ablaze two Philadelphia Police Department (PPD) vehicles on May 30
Black Lives Matter protesters and other peaceful demonstrators convened in the city to protest the killing of George Floyd
Photos and videos taken at the scene show a woman using a burning piece of wood from a police barricade and throwing it on two videos
Blumenthal faces up to eighty years in prison if convicted, followed by three years of supervised release
She faces a fine of up to $500,000

–And note that until they asked etsy to confirm that someone bought the item, and where it was shipped, everything was public info…

If federal or local law enforcement had the slightest interest in rolling up the networks that are orchestrating the violence and destruction, it would be trivially easy for them to do so. Surveillance cameras, license plate readers, cell phone location pings, and cell phone records are just a few of the tools they already have at their disposal.

I think it is great that this one agitator is facing serious charges, but she is just one among many. What about the persons who burned the Wendy's in Atlanta? What about the persons in Minneapolis and other cities who have burned and destroyed police stations, public buildings, and countless businesses? What about the black-clad leaders with radios near the back of the mobs who appear to be directing the action?

I submit that almost ALL of these people have either already been identified, or could easily be identified. There is probably no need to even request any data from.the wireless carriers. After all, the police have Stingrays. Legally or illegally, they deploy them against all of us all the time, so why wouldn't they use them with these mobs? The cell phone data alone would clearly show who was there, and who they were in contact with before, during, and after the riots.

I suspect that our federal, state, and local governments have instructed law enforcement not to go there. After all, in most locales they are gving the mobs free reign to destroy anything they want to, without even a token show of force on the part of the police. So why would they then decide to get tough afterwards? These mobs are freely rampaging because factions within our own government WANT THEM TO. And even though government could easily identify and roll up the Communist networks behind the riots, our own government DOES NOT WANT TO ROLL THEM UP. Let that sink in.

What the hell are normal Americans supposed to do when our own government is complicit in the violence and mayhem that is being allowed to continue day after day, and week after week?

Regarding deepening the larder:
Yesterday I made a deal with a neighbor to split a pig this fall and a steer this winter.
Our ewes should lamb in September.
We have two freezers and may have to invest in a third if we don't have room for the beef in January.
We also plan on expanding the winter garden this year and put in an additional melon patch.
I planted two more fruit trees this morning (pomegranate if you must know).
The apples, peaches, Asian pears, and nectarines are looking good.
The plentiful and fruit thieving gray squirrel population are in for a severe thinning.
I will split the artichokes this winter and have an excess to share next spring with the neighbors who supply our eggs.
We are surrounded by good neighbors; one of whom has expressed a desire to set up guard shifts,if needed, should things get sporty on the farm.
We are a tank of gas up I5 from the environs of the Raiders, so we do worry about the EBT cards showing zero balance in Oakland someday and hungry folks heading north looking for groceries on the hoof.

"We have two freezers and may have to invest in a third if we don't have room for the beef in January."

--you may want to source that freezer NOW. Chest freezers are currently showing 2 month delivery times here in Houston. The tiny ones available on Amazon went from $180 to over $700. There were still some available at that price though last week.

The only new uprights available locally start at ~$800.

Our local (formerly Sears) appliance Scratch and Dent outlet used to always have freezers in stock. I asked the sales associate yesterday what their stock levels are and she said if they get one it sells before it hits the floor. And they're only getting one or two every couple months now, not the steady stream they used to. I guess people are a lot less picky currently...

So, if you think you might need one then, you should probably start working on that now.

For those that are recoil challenged, a 20 gauge can still send a respectable amount of buckshot down range - or what ever other direction is necessary.