If we hear anything solid, we'll post it here.

I have backchannel com out, awaiting reply.
Anyone else gets RT info, not RUMINT, feel free to leave it.

UPDATE:
From The Man himself:

This is the new RP. 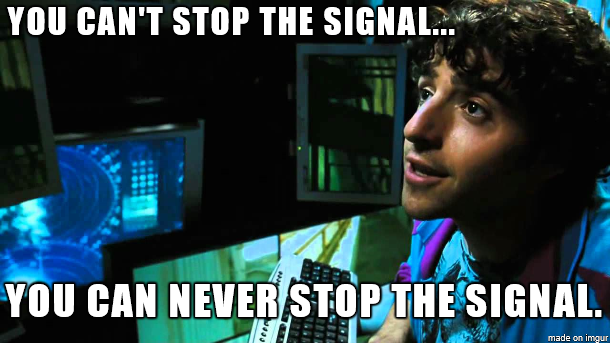 Still no word on what popped their weasel, and made Wordpress blow a gasket and nuke the entire site from orbit.
UPDATE II:
That Would Be Called An "Indicator"
One of the early goals of all Red revolutions is the seizure or destruction of all information distribution outlets.
There is only one truth to the Communist: that day's party line.
Woe unto those who do not adhere.
The second iteration of the Western Rifle Shooters Association (WRSA) blog, hosted by Wordpress, was nuked today.
While it is a loss, it was a deliberate sacrifice of a player to increase situational awareness.
The Reds are on the move.
The prize is the former United States of America.
The Red cares not about race, except to the extent it can and is used to befog the naive about the Party's real goals.
WRSA was, first and always, a freedom advocacy site.
It was shot out of the saddle today by an arm of the Communist enemy propaganda machine.
Their attack did not kill WRSA.
Nor did it kill a single one of its followers.
The totalitarian bastards really can't stop the signal.
Take heart, not just in this tiny skirmish but in the overall struggle to save the West, from WRSA's final masthead:
"This is only the beginning of the reckoning. This is only the first sip, the first foretaste of a bitter cup which will be proffered to us year by year unless by a supreme recovery of moral health and martial vigour, we arise again and take our stand for freedom as in the olden time.”
― Winston Churchill
Forward.
- Concerned American

Labels: censorship is never having to say anything, internet

You beat me to it Aesop, I had just left WRSA site and returned to find it closed. Thought maybe just Google so tried with a different search engine same thing.

Looked up your site as I normally enter though WRSA and was pleased your still up for now.

Spicy times are here. How long before other "Unapproved" sites get closed?

IF WRSA reopens please pass it on.

I'm keeping an eye on their previous blogspot site. It hasn't been updated since 2011, but may get some business soon.
https://westernrifleshooters.blogspot.com

Likeliest cause is the fact that his editorial line for the past couple months has been pushing the idea that COVID is no big deal and all the social distancing measures are unnecessary.

Either one looks at the available dataset, and concludes that
- a gigantic conspiracy arranged for the release of a new virus as a pretext for stampeding the general public and hundreds of thousands of government officials all over the planet into a panic for purposes of manipulating the political scene specifically in the United States and setting the stage for a completely contrived murder by an agent of the Deep State in order to prompt an incipient Communist revolution,

- a new virus appeared unexpectedly, the general public in multiple countries came to similar conclusions, government officials implemented distancing mandates in response to public outcry, large numbers of deaths happened regardless, and a long-simmering racial division happened to be triggered by a random event into widespread explosions around the same time.

Coincidences happen. More often than you think; most of the time you don't notice them.

The thing is, communists exist, too - real communists, with real plots to take over the world and reshape it to their liking. Much more mundane plots than what you're thinking about: plots along the line of "get a couple extra people we like on the city council" and "push extra resources into these House races, see if we can flip them" and "get out the vote in these neighborhoods that are likely to be favorable to us" and "pass some incremental legislation this year, then maybe something going a bit farther in another two to three years".

They're tremendously dangerous. But not showy. More like plodding. So nobody notices. And the problem with the wild-eyed COMMUNIST PLOT screaming is that it obscures the very real communists and what they're doing and how they're doing it.

It's not a great move. But I can understand their position.

Abandoning Usenet and ceding it to the pornographers was the silliest thing netizens ever did. It was pretty much unstoppable. But it required everybody to be using it, so it was the norm. Now nobody uses it, and going back to it means shouting into a vaccuum. It's a lot like the move from blogs to Facebook, or leaving Teamspeak for Discord: people keep giving up liberty AND security for shininess. And then they complain they no longer have the liberties they voluntarily ceded.

It's enough to make one think Ben Franklin was always going to lose his bet.

Almost all of WRSA is archived at archive.org. Go there and search weaternrifleshooters.wordpress.com. Most recent snapshot was on May 12, 2020.

Sorry to pee in the punchbowl since I admire and link to WRSA but they certainly HAD TO KNOW THAT WORDPRESS WOULD DITCH THEM so why, pray tell, didn't the spend the 10 to 20 bucks a month to have their own frigging domain on non-commie servers elsewhere in the wide world?

I don't get it since they have to know they would be torched sooner or later.

And BTW why the fug is racounter still cheaping it out on blogger... you get a special promise to eat you last from Google?

Now that is annoying. Went for my morning common sense blast with my coffee and saw it shut down.

I've said this B4 at various times over the last 6-7 years or so. There has to be some software guru's out there that are sympathetic to the cause of Freedom as has been defined by the number of blogs dedicated to the subject at least since the early 00's. From what I've seen, most of the site owners communicate via back channel, probably email.

My suggestion would be for a bunch of the site owners to get together with a couple software guys and write their own blogging platform. It can't be that hard.

And congratulations to WRSA. They made the short list of the Biden campaign's top priorities in 2020:

We should all strive to match WRSA's high anti-Communist standards.

I'm still "cheaping it out on Blogger" because if I spend actual $$, it will be on beans, bandages, and bullets, which I'll be using, not stockpiling.
The blog is a luxury.

Money is for necessities, and at that point, a blog won't be worth the time anyhow.

BTW, CA had the foresight to move shop to GAB as the "A" in PACE some months prior, and so never went totally down. All he lost was the easy-google location.

What was lost, unfortunately, were the multiple links to a literal goldmine of useful info.
But that only affects the Normies just now waking up.

CA will restore all or most of those valuable reference works. Yes, al lot of it was edifying for normies, a lot was usable to correct long held information that was wrong.

"Money is for necessities, and at that point, a blog won't be worth the time anyhow."

Well, okay because I wouldn't dream of telling another man to reach for his wallet. You coin, Rifle's coin, anyone else's coin is there's to spend as they see fit.

Me, speaking only for myself, I'd say once you understand that the dollar is the new dime, my page doesn't cost all that much. I have virtually unlimited bandwidth for eight dollars a month -- or 80 cents a month, and my host never ever screws with the customers unless they are doing something very evil and illegal. It has a support team that when there is a problem is almost instantly a response and work to correct. DOS attacks are seen and repulsed almost immediately. This host not only was the original host of Instapundit but one person there actually designed the site look in the beginning.

Thus I do not worry that the SJWs of Wordpress is going to yank it because their panties are twisted into their mouths or that the googloids of blogger might someday care enough to erase me on no warning leaving my readers to wonder where I went enough to try to dig up the new address or promises of we'll be back at new URL which we hope you'll find.

Make no mistake having the page chopped is an enormous hassle and results in a loss of traffic that will take years to get back. Oh, that blogger site download template is an immense pain in the ass to work with and most new sites (even Wordpress not running off the Wordpress servers don't translate it very well.)

I'd be sorry to lose your voice and glad to find it again if the link happened to come my way (Oh by the way, as to you and WRSA, there is the famous URL redirect so you can direct all readers to a less commie-soaked host.)

Oh well, suffice to say every man can spend and choose as he likes and if google takes you off the air one night when you slumber I will search for your new site for a long time... but not forever.

"All he lost was the easy-google location."

If you are not on the first page of google searches you are essentially invisible.

Thanks, sir. If I reconsider my hosting options, I'll look your provider up.

But based on gold prices vis-à-vis the entire history of the US, I was already pretty sure the dollar is the new 1¢. Meaning it costs more to print one than it's actually worth. Much like the actual circulating penny.